Following their recent appearance at Madhatters, Dead Man’s Waltz return to inverness to play The Market Bar on the 21st of October. We caught up with Hector MacInnes and Leighton Jones from the band talk to us and give an insight into the band and it’s sound.

What are the origins of your self-defined genre “folk-noir”?

LJ – “Folk-noir” is a term that describes folk music inspired by historical periods of social upheaval…turbulent periods that expose a darker or more deranged side of the human psyche. The Dead Mans Waltz are particularly drawn to exploring tales of Europe in the 20th century (the periods in the run-up-to or in-between the two world wars for example.) The themes – tragic romance, murder, betrayal, deceit, cruelty, all laced with black humour – are Brechtian, but that is exactly where you discover the very twisted core of what it means to be human. This is what excites us lyrically and musically.

The multi media aspect of your band creates an increased intensity, how does that that work when you are gigging, in particular we are thinking about your forthcoming gig at the Market Bar?

LJ – Well, I guess that intensity can be magnified to rather scary proportions in a bar where the audience and band are all perched on a postage stamp! I mean, if it’s and intimate atmosphere, The Dead Mans Waltz play best to that – we are all about hacking down that middle ground that separates the band from the audience anyway. What better place to do that than in the Market Bar?

Given the vast array of styles this might be difficult, but which one of your songs best defines you as a band, and why?

HM – You’re right, that is a difficult question. We often open our live set with “The Butcher’s Wife”, which is a short, simple tale of adultery and its potentially gory consequences. We feel it sets the mood for the rest of the night. We also have a song called “Emmeline” which is something of a showpiece for the band. It’s a really cinematic piece telling the story of German submarine commander who survives World War Two against all odds to discover that his waiting sweetheart has been killed in the bombing of Berlin. The most terrifying thing is that it is based on a true story.

If they want to listen to someone else’s music to get them in the mood before coming to see us? I’m going to go for either Nick Cave’s tremendous version of “Mack The Knife”, or Tom Waits equally barnstorming version of “What Keeps Mankind Alive?” Leighton mentioned Brecht above, and Brecht and Weill are a big influence on our work so it’s always great to see new performances delivered. Their message – that humans are the cruellest animals – will always be relevant.

Have you got anything else to plug?

Dead Man’s Waltz return to Inverness to play The Market Bar on the 21st of October.

Thanks to Hector MacInnes and Leighton Jones from the band and the guys from Everymatic. 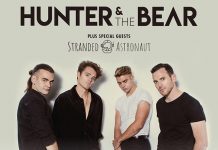