We talk to Fatherson before their gig at the Ironworks, Inverness on the 15th of March, 2012.

Fatherson are no strangers to Inverness, play IG:LU and the Ironworks in recent months, but they are back in a headlining slot at The Ironworks and so we were grateful when they answered a few questions. 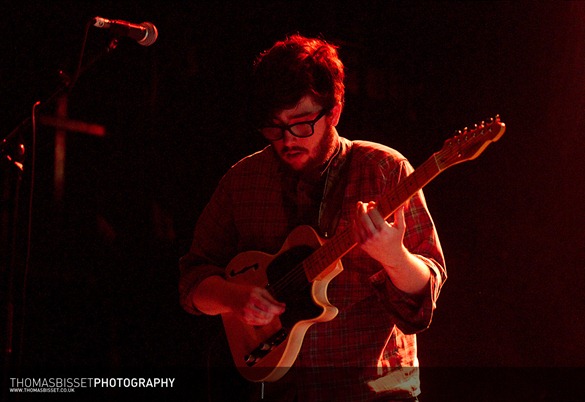 A recent blogger in a review of the “Next Big Thing” gig described Fatherson as “equal parts nineties grunge, scots indie and epic folk”, how do you describe the band?

I always struggle with this question. I think the nineties grunge/scots indie/epic folk is a pretty good description. We’re really just three childhood friends who have managed to make music that people seem to like. I don’t think our music is very contrived it just kind of happens. We’ve been lucky enough to be able to recently work with some additional musicians which has allowed us to push our creativity even further and expand our sound. It’s pretty exciting at the moment as we’ve brought in a cellist and a session guitarist/keyboard player so our new music is taking a slightly different route and building on what we’ve released before. So really, we’re not sure how to describe ourselves, we play music, we’re from Scotland and you should listen to it!

Have you got any plans to record new material, after your debut release last year?

We have our new single “First Born” coming out on the 9th of April and music video being released pretty soon for the track. The b-side Kiteers has had some Radio 1 airplay for BBC introducing which is pretty cool, we are really excited to let people hear the single!

Fatherson never seem to be that far away from Inverness, what keeps drawing you up here?

We love Inverness, it is probably our favourite city in Scotland. Our drummer’s sister lives up there and our best pal Stuart Nelson (of He Slept on 57) lives up in Inverness so there’s always plenty of excuses to make the trip up from Glasgow.

Last time you were up in Inverness you were supporting Feeder, how did it go?

It was a great show, we’ve played with Feeder before in Edinburgh so it was lovely to be sharing the stage with them again. The audience were great swell and The Ironworks is a brilliant venue and somewhere we had always wanted to play so it is pretty exciting to be coming back for a headline show in March.

How different is it to be headlining the Ironworks this time around, what are the different considerations/preparations you need to make this time round?

Well, we’ll obviously be playing a longer set and hopefully dropping a few new songs. We’ll be doing a bit more of a show with it and trying to get a few more folk moving about. It’s going to be a good night!

You have had a lot of interest in support slots for you gigs, what are your feelings about the music scene in Scotland at the moment?

It’s great. I listen almost exclusively to Scottish music these days and the quality and diversity around at the moment is brilliant. It’s good to see Twin Atlantic making an impact on the mainstream and representing that area of the scene in the charts. I think its a pretty exciting time and hopefully there will be some more bands breaking through into the mainstream over the coming year!

Fatherson play the Ironworks Venue on the 15th of March, 2012 with support from Last Summer Effect and Purple Divide (see Fatherson support announced). Tickets available via www.Ironworksvenue.com or without booking free from management@LastSummerEffect.co.uk.