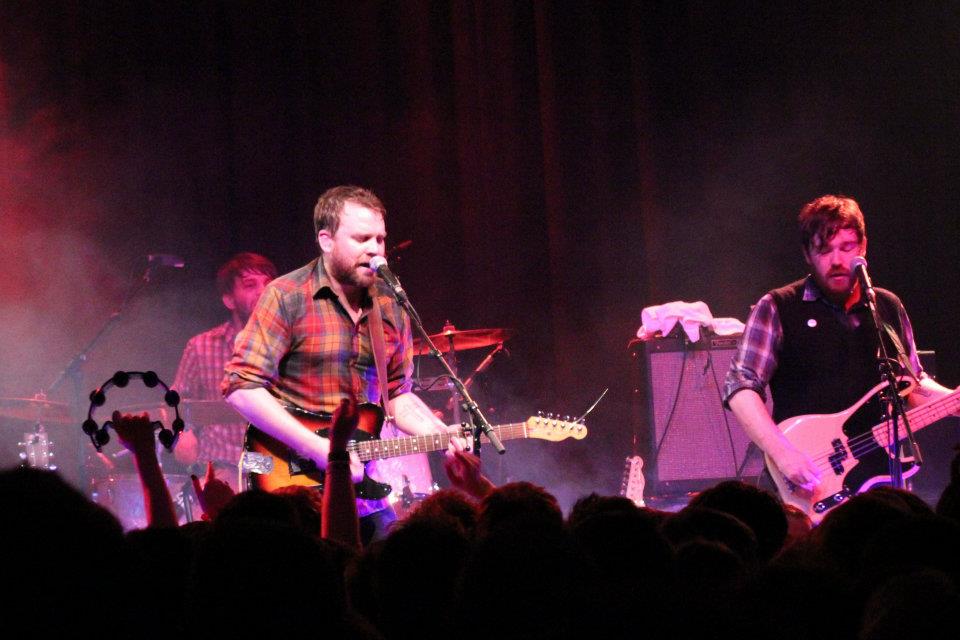 Review of Frightened Rabbit, at Strathpeffer Pavillion on the 21st of April, 2012, by Chris Lemon. Photos by Frank Finlayson.

Given that I am in the throes of completing a final essay, please excuse my shallow attempts to create an academic feel to this review. So I dedicate this review to anyone in a similar position (and yes, referencing is not my forte).

In 750 words describe the entity of Frightened Rabbit, making reference to a recent appearance with evidence as appropriate.

Frabbit are  lead vocalist, rhythm guitarist and lyricist Scott Hutchison, guitarist and bassist Billy Kennedy, guitarist Andy Monaghan, drummer Grant Hutchison and guitarist and keyboardist Gordon Skene (Wikipedia, 2012), for a short history of the formation of the band please see Raber (2010). Scott has been described as “Brian Blessed-bearded Moses” (Mackay, 2011), appearance aside, Pollock (2012) described the band at a recent appearance as having “a rare instinct for widescreen, dramatic indie rock which pulls at the heart.”

Frabbit were playing Strathpeffer Pavilion, described as “A beautiful and historic venue in the unique setting of a Victorian spa village in the heart of the Highlands of Scotland” (Anon, 2012), as part of their Highland Tour. The official website (2012) explained “It can be a right bastard living miles from the city when you want to go and watch a bit of the ol’ rock music”, it can be concluded that the aim was to bring the live show to their more rural fans.

The gig was sold out, all bar a clutch of tickets, however there remained plenty room to manoeuvre, in what can definitely be called the most civilised venue in the area (separate bar, renovated pavilion, and £2.50 a can of beer, with a choice as to whether you want in the tin or in a glass – very posh (but for glass read plastic container)).

Little can be said of support act: Brazil Exists, “they are very “Frabbit”” an audience member commented very early into the set, there was no evidence of this changing throughout. An opportunity to contrast or stand alone, may have benefitted the Stirling based amicable quintet, who apparently have a drummer that likes sleeping in toilets of Youth Hostels they don’t stay in (there must be a story there…).

So to Frabbit, from walking on the stage it felt very much like a homecoming, a feeling reciprocated by the band and in particular Scott, whose trouble with the guitar saw them leaving the stage but quickly returning. A sign of things to come? Not a chance. Laidback, maybe, but certainly not casual.

The energy of the band was clear for anybody to see in an almost relentless set despite the arguably melancholy of some of the lyrics. Clapping, stomping and yes the crowd were definitely lapping it up. The audience were noteworthy both for making a noise, becoming a “big Strathpeffer accordion” when called for, and for their respectful silence, during Scott’s acoustic solo of “Poke”.

Whilst “The Winter of Mixed Drinks” tracks “The Loneliness & The Scream” and “Swim ‘til you can’t see the land” competed for rabble rousing choruses there was an emphasis  on the 2008 release “The Midnight Organ Fight” with  tracks bouncing along especially for the likes of “Old Old Fashioned” “The Twist” and of course “The Modern Leper”.

“Keep Yourself Warm” was the last song of the evening, moving the crowd towards a crescendo with such power that nearly no one noticed that it was the only song of the encore.

There has been lots said about Frightened Rabbit “taking it to another level”, and with the band returning to the studio to finish of the new album, you cannot argue that this is inevitable. However there was something quite perfect about the performance tonight that you hope the “next level”, wherever that may lead, does not detract or distract from their undeniable charm and talent.