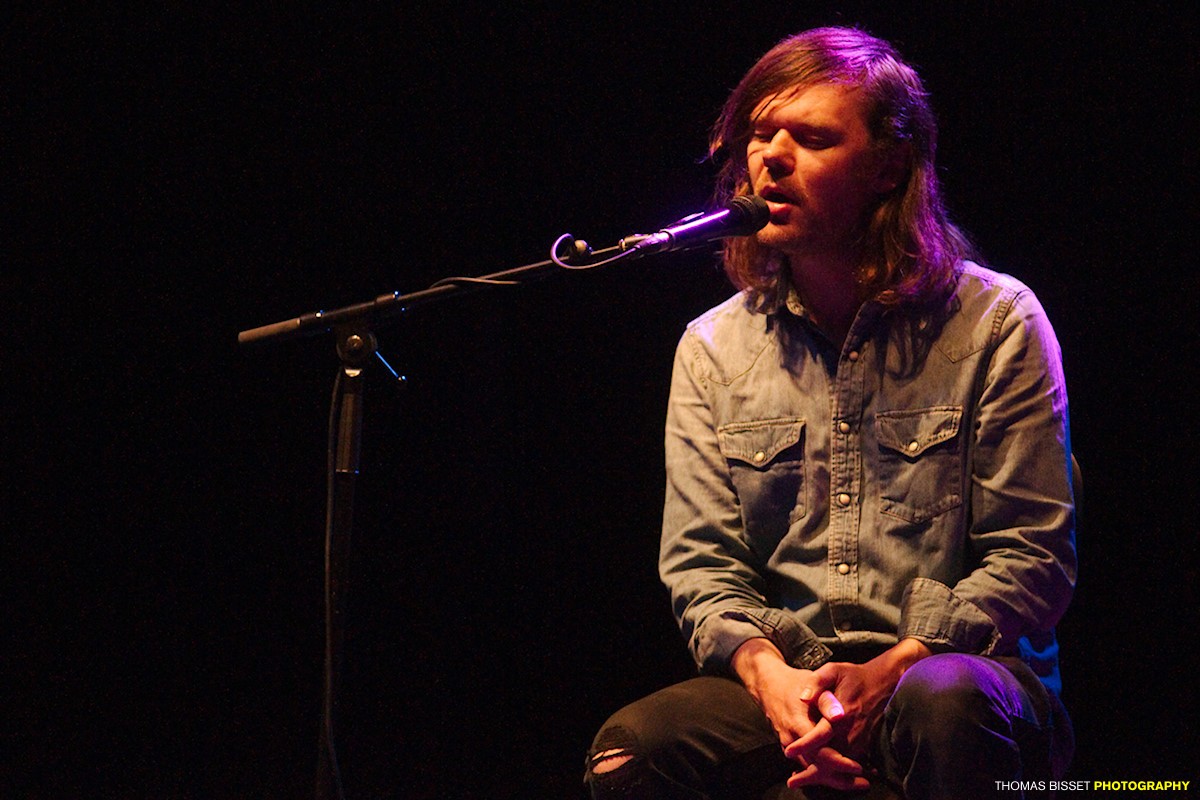 A review of Roddy Woomble at The Ironworks on Wednesday the 17th of May, 2012, by Toby Stainton. Photos by Thomas Bisset.

This one was an evening of firsts for me, the first time seeing Roddy Woomble performing his solo material, having seen Idlewild on a number of occasions, and the first time in the Ironworks for an all-seated gig. I’m not always convinced by all-seater concerts as I feel it lends a churchy air to proceedings and that the acts on stage are preaching to you rather than performing. However on this occasion I was happily proved wrong and rather than being stilted and awkward it gave it a more intimate and personal atmosphere.

Touring with Sorren Maclen on Guitar, Seonaid Aitken on Fiddle/Piano and Gavin Fox on bass, the current tour is more of an acoustic affair but this doesn’t take anything away from the strength of the studio material when played live. It’s not often an artist can make you really listen, there’s a timbre and clarity to Roddy’s voice that really draws you in. This is backed up by the strength of his song writing with each song telling a story rather than depending on clichés and bog-standard verse-chorus-verse tunes in 4/4 timing.

Not one to hog the limelight, he gives due deference to his accompanying musicians and sits just to the side of them as if to indicate he’s not quite worthy enough to sit with such esteemed performers. Seonaid Aitken’s fiddle playing is something to behold though, and in a town where we’re possibly over-exposed to fiddle players, she really does stand out. Effortlessly switching between folk, country and bluegrass styles before swapping her fiddle for the piano for a few songs.

Roddy’s self-deprecating humour lifts what could have been quite a sombre gig as many of the songs are not exactly fast and cheerful numbers. Introducing ‘Old Town’ as being about ‘any town really, most likely Paisley, not that Paisley’s not nice of course, you just wouldn’t want to go there on holiday’ and ‘I’m Leaving without Gold’ being about ‘the number of 19 because I forgot what else I was going to say…’ lightens the atmosphere.

A cover of The Bands ‘Twilight’ gave the original a run for its money and I’d like to think it would have done Levon Helm proud.

Singles ‘Roll On’ which made a ‘very, very small impression on the charts’ and ‘Old Town’ had the audience swaying in their seats. Old Town in particular included some especially virtuoso fiddle playing from Seonaid Aitken before finishing in a folk jam with a sneaky wee reel thrown in there for good measure.

There is a new as yet untitled album out due this year and we were treated to their first live performance of ‘Travel Lightly’ from the anticipated release. By the sounds of things he hasn’t strayed far from his first two solo albums and the song has the same acoustic folk feel as his older material.

Of course there had to be a nod to Roddy’s other work and the Idlewild fans amongst us were delighted when during the encore they broke out ‘You held the World in your Arms’, followed by the lesser know ‘Goodnight’ from the ‘Warnings/Promises’ album for the final song of the night.

The only downside is that it was all a bit too short and clocked in at just under the hour. I certainly feel his back catalogue is large enough to add another thirty minutes to the show. All in all we all left as happy punters, a very relaxed and chilled out performance by Woomble and Co which seemed to cast out a happy glow all of those attending.  I don’t think I’ve never known people to leave the Ironworks so quietly and even….. blissed out?!

Roddy has recently been announced for the Insider 2012 (further details here) and you can see more photographs from the gig, including James Mackenzie, here.