With a line-up that continues to grow, the Ironworks hosts a selection of local bands to raise funds for the STV Appeal on the 6th of September. 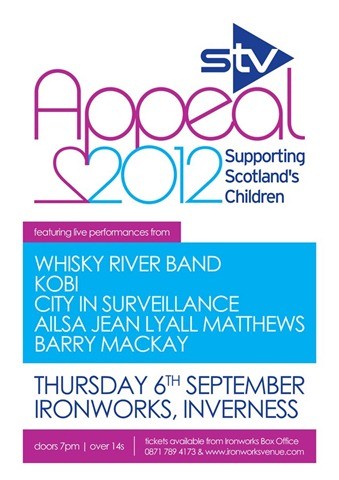 Taking from some of the best acts on the go locally at the moment. After a an impressive Summer Showcase and HEN stage appearance at Belladrum. Purple Divide, will join indie rockers City in Surveillance. KOBI after a main stage appearance at Belladrum and drawing an impressive crowd for an early slot at Rockness join the bill. Headliners for the evening will be “local heroes” The Whisky River Band. Recently added to the bill are Ailsa Jean Lyall Matthews and Barry Mackay.

Tickets are £6 (yip a pound a band) Tickets, for the over 14’s gig, are available via www.IronworksVenue.com or at the door.