The Eagle hosts a 5 week battle of the bands starting on the 5th of September. 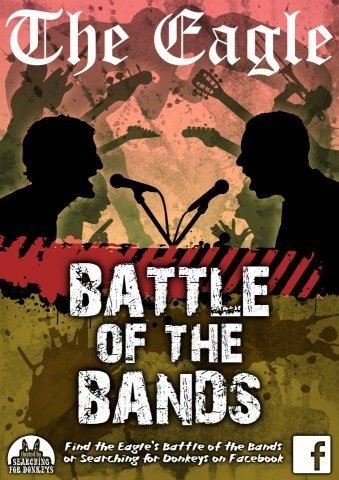 The competition neatly fills the gap left by the imminent finishing of the the Summer Showcases, giving people a chance to see 4 acts an evening compete for the prize of a three day recording session at StrathSound. The winner for each heat will be decided by the Clap’o’meter, a great incentive for acts to bring along as big a fan base as possible. The current line up includes bands such as 76 Knots, Naked Red, The Ragazzi , Square One, Scott Buddy,  Dougie Burns, Emma Mitchell, Scott MacBain, Spoke To Soon, Lionel, Searching For Donkeys, Silence To Medicate, Great White Elephant, Thousand Stars, Deadbeat Poets and City In Surveillance.

Speaking to Barry MacFarlane, who is running the event he said “we set it up for a bit of fun to give the bands that come along to the Open Mics nights something to play for in the recording session, wasn’t expecting it to be so well received, thought we might be lucky and get 8 bands to play but it seems pretty popular.”

Please bear in mind that the schedule and acts are likely to change, so keep an eye on The Eagle Facebook event’s page.