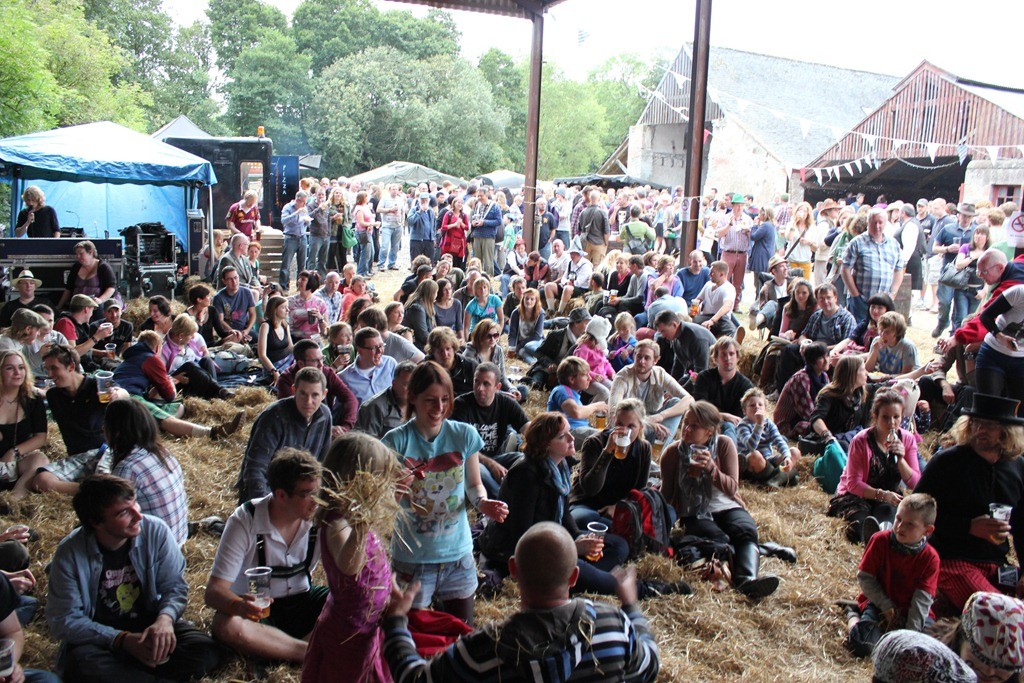 A review of Jocktoberfest 2012 at the Black Isle Brewery. 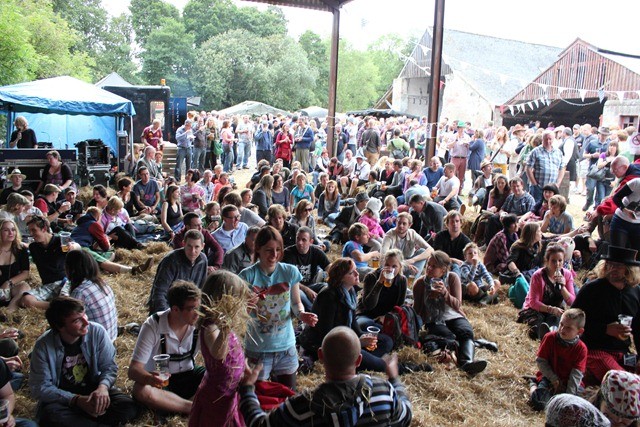 For me this was to be my last festival of the year; music, beer or otherwise. I was hopeful of a great day of beer, bands and banter. Before we get to the aforementioned “b”s the weather was unseasonably clement. Mind you in a Scottish summer any warm day can be described as such.

On arrival, the first point of note was the relocation of the car park from a field down at the bottom of the hill which last year led to a treacherous midnight trek in the dark to retrieve your car for the non-campers. This year it was well sign posted and sat right next to the brewery building. Helpful and knowledgeable staff were on hand to direct to parking spaces. I use the word knowledgeable as when we had parked up, the next car approaching the stewards was a BMW. One of whom noted that “they are crap off-road” and pointed them to a spot near the exit!

The site itself is an intimate affair with a small number of caterers at the entrance leading onto the main stage to the right, and a the bar and covered seating areas to the left. Toilets were positioned behind the main stage of which there were unfortunately far too few. A moan I hear you say. This, as will become evident, was the only one that I would have over the whole day.

Settling down with a pint of Black Isle Blonde, well this is a beer festival and as such it needs to be sampled, the first act that I saw, as I was unforgivably late, was Easy Tigers. Their set was proving to be a bit of a winner with the laid back crowd who were lining the periphery of the barn, sitting on the hay bales which marked out the boundary. A fair few sat on the scattered hay soaking it all up as the ubiquitous kids threw hay over each other. 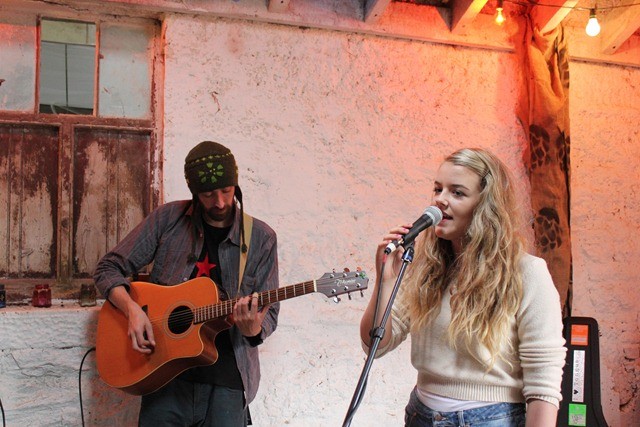 Although the focus was on the main stage, at the entrance to the bar was an acoustic stage which had a number of acts performing throughout the day. Timings did not appear to be advertised, but visits to the bar saw glimpses of Ben Hesling and Emily MacKinnon, Iain McLaughlin and James MacKenzie.

Next on the main stage was Esperi. As much as I was looking forward to this act, I wasn’t certain that everyone would buy into it. Esperi, also known as Chris Lee-Marr, is the ultimate one man band, but that description probably does him a disservice. This is the multi-layering of instruments, and what would appear to be children’s toys, to create a quite incredible thing of exquisite beauty. As each layer is added, he goes about his business in a very unassuming manner bringing, thankfully, the audience along with him. That was the key to this festival performance, that they supported each additional sound wholeheartedly, most noticeable when he swung one those kids flexible plastic tubes (they must have a name) around to create a further layer. At this point I could have packed up and gone home a very happy person but there was more to come.

Miniature Dinosaurs were next to enthrall but were wary about asking for the Scotland score in case they spoilt the game for anyone who was recording it. The Stirling band lay out tunes of epic proportions, in a similar vein to The Killers, and produce a set of great gusto. Another band to check out on their next return to Inverness, and you only have to wait until 19 October when they turn up at Hootananny, or you’ll see them sooner if you are popping over to Loopallu some time soon.

Inverness’s Mystic Shoes took their turn next knocking them out as a steady mix came forward to dance in front of the stage. A mix that included the odd giraffe or two! “Finally someone taller than me!” commented singer and guitarist Fergus Weir. Driven along by Robin Abbot’s southern drawl on ‘Viva Las Vegas’ and the rockabilly ‘Stray Cat Strut’, they kept the momentum up, and maintained their position as the best party band in the Highlands. This led to a turn from Edinburgh 8 piece, We See Lights. Their set of generally mid-paced indie/folk numbers, all put out with a smile on their faces, which they needed with the bizarre goings on before them. There were also a couple dancing to a different tune before them, leapfrogging and generally charging about. Not what they were expecting, but they have been here before. 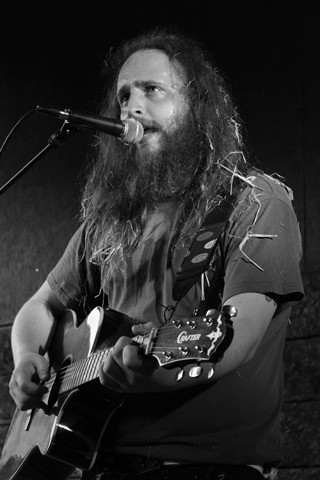 The crowd although receptive to each act were still content to sit around in the warm afternoon, with only a few exceptions dancing, or otherwise. On the prompting of compere, Jamie MacDonald, they were on their feet to greet Toby Michaels Rolling Damned. Toby first sounded out his war cry with a rousing ‘Bat Out Of Hell’ to a barn now with all on their feet. When the Rolling Damned joined him on stage it was time for Toby to take flight around the site. Not for the first time, and not for the last, I suspect. His return to the stage was short lived as he returned to the front of the audience to be promptly covered in hay by both wee kids and big kids, only to return looking more like Worzel Gummidge (one for the wee kids to google) than the rock god he portrays. The Rolling Damned ably supported Toby, even if they were as bemused as always, as they kept the crowd on their feet. They left to rapturous applause and no doubt a private helicopter to take them away to their playboys’ pad. 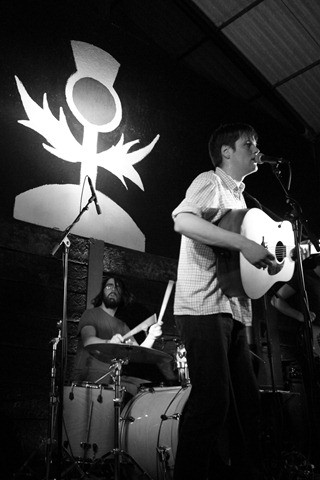 The beneficiaries of this hyped up crowd were Washington Irving. Taking full advantage they kept the crowd on their feet as the darkness began to draw in. Their brand of indie folk kept the now beer laden audience in on their toes. Their mixed paced set gave some respite from the earlier onslaught. 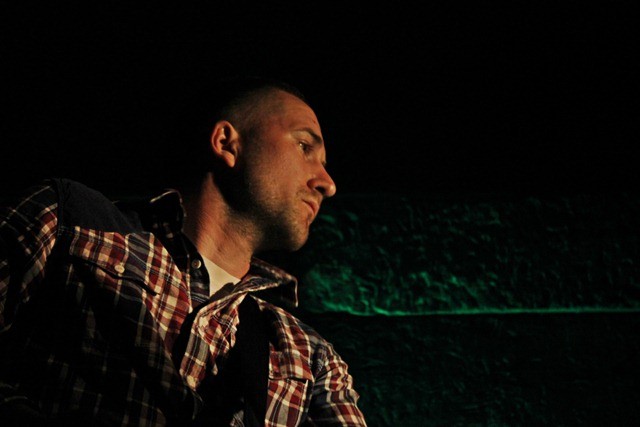 The Whisky River Band are a band who know how to party, and nights such as their album launch testify to this. That night they played to the converted but tonight not everyone knew who they were. In fact the person next to me, who thought they were brilliant, also thought they were Hoodja, even though he didn’t know Hoodja were! Now corrected I’m sure an album purchase is in the offing. Each song was greeted with unreserved enthusiasm, a sway of people cheering each song as it was introduced. I always expected the band to go down well, but this well? Within an hour the Whiskys had added a whole new legion of fans to their following.

Unfortunately, due to circumstances beyond my control, I had to take leave of the festival. The night was well set up for The LaFontaines and the real Hoodja. I left with a warm feeling, not just from the blonde beer, but that warmth that you get from being part of something really good.