Matt Sillars takes some time to talk about the open mic sessions held at the Greenhouse in Dingwall every second Thursday night. 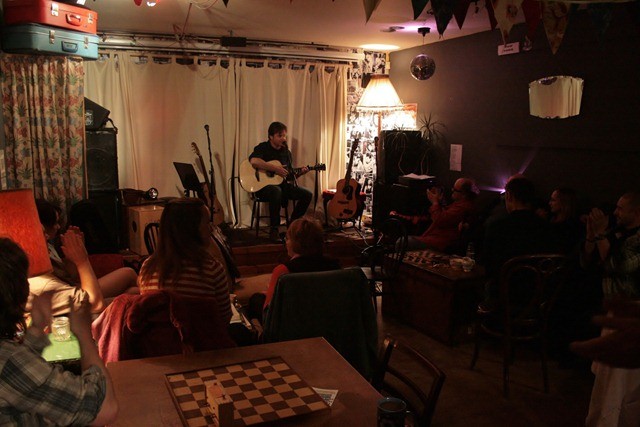 The Coffee Shop Sessions, the “brain child” of Rob Ellen, are very much part of the music scene of the Highlands . Matt describes one of the biggest benefits of the concept: “They are ‘listening gigs’ for singer songwriters who get a chance to have quieter, acoustic based pieces heard properly and for bands who like people to pay listen to their playing”. This obviously is helped by the setting, in that some of the challenges of playing in a pub are not present. Another advantage Matt identifies, is that “young people can come and play and watch and gain valuable gigging experience”. Combined these make for a unique event,” We believe there is nowhere quite like the Coffee Shop Sessions at the Tea Posy in the Greenhouse, Dingwall” Matt boldly states, but few would argue.

For the Autumn/Winter season of the open mic the format have changed a little with the intention of giving the opportunity for the Guest act to have the biggest audience and appreciation from the audience “the special guest, who plays a 40 minute set,  is rewarded with the takings from the ‘pass the hat”’Matt adds “With between 20 and 40 people at every open mic night this can be a decent amount”. So instead of “headlining” the event they take to the stage at 8 45pm, leaving time after 9.30pm for an open mic slot.It also means  the traditional ‘jam session’ at the end of the night has been reinstated.

Over the time of doing the open mic nights, it’s clear that Matt has seen a great deal of talent, Matt recalls some of his favourite moments: “Emma Mitchell singing ‘The House of the Rising Sun’ took everyone’s breath away. Viper Central – a bluegrass band from Canada – raised the roof. Ryan Golder was memorable as not only is he a great musician but is a great entertainer and Pete Macdonald from Shutter and The Little Mill of Happiness gave us songs worked up with Rebecca McDonald – a truly emotional experience!”. But it is the open mic that often the biggest surprises come:” The best sets often come from people at the open mic sessions – we have a great tradition of helping people develop and giving them the space and a place to try their songs – Greg Miller and Dean Morrison played an excellent set just before they formed the Ragazzi. Dorec-a-belle played in several guises at the coffee shop before forming their band. Megan Blyth played her early sets with us and Red Hook Rapids formed at the Coffee Shop.” A lot of the acts have progressed Matt notes  that they have “carved a niche in the Highlands and beyond with airplay on Radio Scotland and Moray Firth and Festival Sets all over Scotland”.

Those taking the guest slots in forthcoming nights include “Ailsa Jean Lyall Mathews, fresh from her Ironworks gig, Jim Kennedy from Rhythmnreel, Greg Barry from the Elephant Sessions, Howard Swindells from Highland Hot Club, Maria Hall and Adrian and Lucy Telfer.” However Matt is keen to bring even more talent to the sessions: “We definitely want more bands! We are really interested in young people who perhaps have not played much in front of an audience – we know there are great 14 year old players out there because a lot of them have already been to the Sessions. Rock bands who fancy an acoustic or stripped back set. We are happy to hear one song from a new face. You don’t have to a full worked up to play on the open stage. Poets and storytellers are also welcome.”

The best way to  get in touch with Matt is through Facebook, the open group name is Coffee Shop Open Mic Sessions.

Coffee Shop Sessions are on every second Thursday night at the Greenhouse with line-up details updated here.