Under Mountains is the first studio album by Rachel Sermanni. 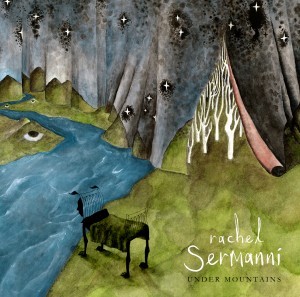 I’ve been following Rachel Sermanni since hearing her play a support slot in Inverness a couple of years ago. In a short space of time she’s progressed from these solo performances to touring with the piano and fiddle players (Jennifer Austin, Siobhan Anderson, Louise Bichan and Laura Wilkie) that feature on the album. The full band line up is completed by Glasgow based guitarist Leo Forde, along with Louis Abbott, Phil Hague and Joe Rattray from Admiral Fallow.

The album was recorded at the remote Watercolour Studios, situated above Loch Linnhe and near Fort William. The music reflects these surroundings, with spacious arrangements and relaxed, confident performances.

Rachel Sermanni is often praised for her storytelling, and the album supports this claim exceptionally. All too often the lyrics of songs are tailored to fit a traditional verse/chorus structure, particularly when written by younger musicians. Every track on Under Mountains is arranged to support the lyrics, which are full of imagination and substance. The only two times Sermanni comes close to a traditional chorus is in ‘Breathe Easy’ and ‘The Fog’.

Ian Grimble’s production of the album has been handled with a refreshingly light touch. The dynamics of the performances has been maintained throughout the mastering process, and effects have been used occasionally and unobtrusively. There’s a real variation in arrangement and instrumentation throughout the album. The use of backing vocals is a great example of this, from the rich textures created in Bones, to the the whispers in the background of Sleep and the interesting harmonies of the diminutive ‘Little Prayer’. The arrangement of ‘Waltz’ is a particular high point. Sermanni and Abbott’s voices work well together and it’s good to see this pairing featuring on the album (to hear more from the pair I’d recommend tracking down their cover of Low’s ‘When I Go Deaf’; which was featured on the ArtWork Scotland documentary on SXSW 2011).

Rachel Semanni is currently on an extensive tour of the UK and Europe to support the album release. The official launch of Under Mountains takes place in the unique surroundings of the Ptarmigan Restaurant, Cairngorm Mountain on the 13th October. Rachel can also be seen at HMV, Inverness on the 22nd of September.You can buy Under Mountains here.