You can’t help but love the Estrella guys, originating from Thurso, although adopting Aberdeen as their second home, the 70’s and 80’s infused rock creates more than a touch of nostalgia. Six months after our last interview we managed to catch up with the guys prior to their gig at Mad Hatters, Inverness on the 21st of September. 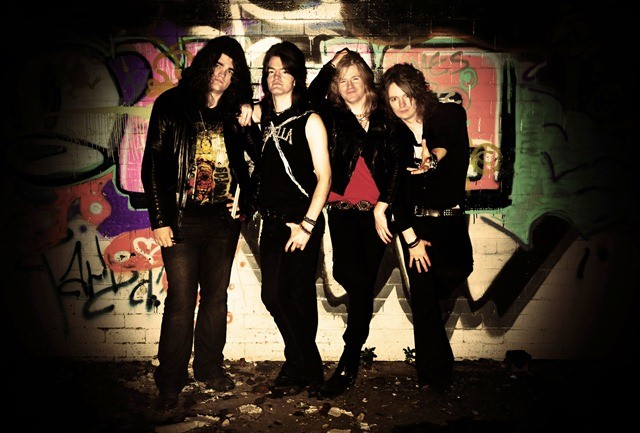 How has the last six months been for your guys?

Amazing!  As you know we released our debut album “Come Out To Play” in May this year and had 3 album launches!  We like to PARTY, excuse the pun, but we had one album launch in London’s Crobar, one in our hometown in Thurso and one in our adopted home in Aberdeen!

In fact, the first night of our, first ever, UK tour was kicked off with our London album launch.  It was a good night and, amongst some of the industry people on the night, Dave Ling, Classic Rocks Live/Reviews Editor came to see us which was a privilege in itself!

We’ve had a great first leg to our UK Tour – been in some fantastic venues – met some truly amazing people – we got to play our music and do our thing on stage – which we hope everyone enjoyed.  We think they did as we’ve picked up lots of new loyal fans and all the venues want us back soon which is a good sign.  We can’t wait to get back out to do it all over again, we loved the whole touring experience.

We have so many highlights from our first tour but need to mention some here – playing back home in Thurso was great for us and always makes us a bit hyper and, of course, we were surrounded by family and friends so that just all added to the night for us.    When we were up in Caithness we also played an acoustic set on the World’s Shortest Street!  As part of the tour in September we played alongside The Burning Crows – managed by Matt Goom from the Quireboys – in Glasgow’s Cathouse; and supported Furyon – who went down well at this year’s Download and Bloodstock Festivals – in Aberdeen’s Tunnels.

The second leg of our UK tour is continuing throughout October, November and December, so look out for us at Mad Hatters in Inverness on 21 September, The Stromness Hotel in Orkney on 6th October, Highway to Hell 3 in Glasgow 19/20th October and we have more dates being announced soon – keep checking for more details on Estrella Rocks!

However, for those who haven’t been able to Come Out To Play with us yet! we’ve set up our own YouTube channel, our favourites are the “Do It Til We Drop” live video performance showcasing us we think as a band and displaying one of our trademarks – great guitar solo from Luke Gunn.We’ve also teamed up with the Rock It Dancers, a truly unique video of the “Do It Til We Drop” track as well.

In the past month, we have also been nominated by Bauer Media Radio Station, Northsound, for their One To Watch Award in 2012.   The Northsound Awards is a celebration of local groups and individuals who have achieved the extraordinary or gone above and beyond the call of duty and recognises their achievements.  The awards ceremony takes place on Thursday 27 September in Aberdeen’s Music Hall.

“Come Out To Play” was released in May, how has the response been to the album?

Better than any of us could have hoped for our first album!  So that people could sample the album before they bought it we put together a Debut Album Taster Video which showed some actual footage of the recording of our debut album along with a short clip of each track – it can be viewed in the Blog Section of our official website and it has had almost 2,900 YouTube hits!

All the album tracks are available to download on iTunes and of course the CD is available to buy on Big Cartel, all good on-line retail outlets and in the local music shops in Thurso and Aberdeen.  We have seen significant sales for the CD not only in the UK but also in the USA, Germany France, Portugal, Spain, Japan, Norway, Sweden and Denmark!”

The album got to the Top 200 on iTunes Rock Chart getting a higher position than Led Zeppelin and The Beatles that day!! It also go to the Top 10 on Europe’s Leading Rock/Hard Rock/AOR Online Store AOR Heaven and Top 30 on North America’s Largest AOR/Melodic Rock Online Store NEH Records.

Tracks from the album are also getting lots of radio airplay too!  We wanted the album to have something on it for everyone and it certainly seems to be that way as it is not just one particular track that is getting the airplay – “One Love”, “Shout”, “Party”, “Whatever It Is”, “Chance of a Lifetime” and “Mona Lisa Smile” – all seem to be firm favourites.  We are really delighted too because Jim Gellatly – from the radio show In:Demand Uncut which is aired across Scotland –  who is known in Scotland for finding new up and coming artists – has been championing our music.  Aaron Philips, from In:Demand Uncut has also been playing us but again the airplay is not just in the UK we are getting played regularly in the USA, Portugal, Spain and even in Indonesia!!

The album has also received excellent reviews in some of the leading rock magazines. They include Metal Hammer descring the album as “ a raucous but accessible debut album – Paul Gunn is an extremely fine frontman and of course he knows it!” and Jason Ritchie, from Classic Rock, “’One Love’ is a perfect arena rock anthem with a big, catchy chorus and a nifty keyboard riff. The sound is not overly slick either, like Def Leppard meets Shy.” plenty more reviews can be seen on our website.

Come Out To Play has also just won a Scottish New Music Award for Loud/Metal Recording of the Year, we are also really proud to say that we were the runners up for Record of the Year too.  This was a great achievement for the band and our music as the Scottish New Music Awards purpose is to honour the music made in Scotland and recognise the artists and the industry that make it happen.

Since releasing the album we have also released an acoustic version of one of the album tracks – One Love – if your readers wish to receive an exclusive FREE acoustic version of our track “ONE LOVE” which has been going down really well at acoustic gigs around Scotland – simply sign up to the mailing list on www.estrellarocks.com and then send us an EMAIL:  estrella@estrellarocks.com SUBJECT: ONE LOVE and we will send an MP3 to your readers of the track by return.

Over the past couple of months too, we have also been getting some record company interest but up to now we’ve being trying to do as much of everything on our own in conjunction with our management company!  Having said all that, if the “RIGHT” record deal for us, as both a band and Management Company, came along we would seriously have to consider it . . . !

Are there any plans for a follow-up?

Most definitely YES!  We’ve all individually been working on new material, we’ve put some of it to John T Sinclair our producer (ex-band member Ozzy Osbourne, Uriah Heep and The Cult) who himself lives in Inverness and after our Inverness gig we are going to spend a week back in the studio.  It will be next year now before we release anything but really excited about some of the new material we have.

You played in The Surface Festival Regional Final , how was that experience?

Although we didn’t win on the night of the Regional Final, Surface has been a great experience for us as a band.  We’ve picked up lots of new fans in the Glasgow/Edinburgh area through playing the Surface gigs and have met some great bands who have now become friends and we are hoping to do some gig swaps with them in the future.   And to top it all we know we have a fantastic and very loyal fan base of ESTRELLA WARRIORS, as part of the voting process was to get your fans to text vote for you as you went through each stage, our fans always made sure we came out on top where text votes were concerned, and not just by some A LOT!!!

In general what motivates the band as a whole and how do you define success?

The old old cliché – we just love doing what we are doing – we don’t want to be doing anything else – the response to our debut album and being on our first ever UK tour has only fuelled that feeling in us all – we get such a buzz playing our music and getting the crowd involved – throughout the tour we met some really interesting people too that genuinely want to help us to go further in what we are doing.  Success to us would be to be able to make a decent living from playing our music and touring but we realise that we are probably going to have to venture into Europe potentially the USA to do that.  It would be great to get a major support band slot, that no 1 song or a record contract but we will just keep doing what we are doing and see where it takes us!

What are your hopes for the band?

Longevity, so that we can keep doing what we are doing!  Our sound is 70/80s infused rock – mixed with melody and riffs, thunderous beats and anthemic choruses – delivering a fresh new rock sound which we hope will have a place in today’s main stream music!

Before the year is out we are hoping to play a really special gig at the former family home, Netherton Cottage (in Brechin, Dundee), of the founder of the Harley-Davidson motorbike!  The cottage has recently undergone extensive renovation and the new owners have asked Estrella to headline the acts to play at their THANK YOU PARTY for all the contractors working on the project.  It’s a private function but we are going to do our utmost to stream the gig on YouTube for everyone to enjoy!  The restoration is the first phase in a proposed plan to create a Davidson legacy visitor centre and museum.

We are going to be the main support at next year’s LES-FEST but hoping we can get some more festivals under our belt too.

We are also planning a European tour for next year probably in the first half of the year, we are initially working with a German agent as there is a big rock scene over there so hopefully we will have some news on that front before the end of the year.

You can also look at our earlier Estrella interview.