We met up with Furry Vengeance prior to their debut as a band at the Winter Showcase, Ironworks, Inverness on the 29th of December. 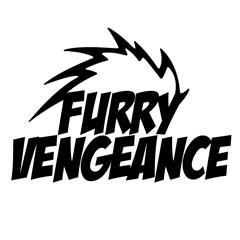 For the uninitiated Furry Vengeance was formerly (albeit briefly) My Property and before that was the acoustic duo Ryan Golder and Barry Mackay and before that Barry Mackay,although Ryan was very definitely around. That’s a busy year (sorry 5 months) by anybody’s book.

Furry Vengeance consists of the aforementioned duo with Andrew Stewart on Bass and Calum Macrae on Drums and Percussion, and we were lucky enough to catch up with them prior to band practice on a rather miserable Monday night.

Barry acknowledged that the transition to a band was almost inevitable, given the feedback from people that have listened to the music “they were always saying a wee bit of bass here, or a bit of drums there”.“ I had said that I wouldn’t be in a band again”, “That didn’t last long “adds Andrew with a grin on his face. The idea of getting a band together was not just to make it “noisier” but to make the music even better.

As for the name, Furry Vengeance, it was clarified,came about in a random way. “Barry just kept spitting words out” when they were looking for names. “It came from the TV guide” Barry concedes, (the film is about woodland animals taking revenge on property developers, it’s awful) although he is happy to blame Ryan’s fussiness in not being able to settle on a new name. “I think it sounds f*****’ cool”, Ryan suggesting it depicts the music as it’s all “furry”. “But we’ve rocked it up now” reassures Barry “and it’s more noisy”.

So how do the new band members feel being part of the bromance or “guy love”. For Calum it appears to have been a bit of a whirlwind “I am not sure how I got roped into it” although Ryan remembers it with more clarity “I sent you a text asking if you wanted to be a drummer, I knew what his quality of drumming was like”. “Average” Calum interrupts. Ryan, ignoring Calum, “That’s just the drummer we need”, Calum again adds “yes, average”. But clearly Calum brings a different more valuable strength to the band, “Pizza”. A future sponsorship deal from Domino’s may not be that far off by all accounts. “I would perform in a Domino’s uniform if I got free pizzas” Calum confesses.“This bands the best band I’ve been in” Calum is happy to add, “from a musical point of view it’s epic”. His previous band, he feels was “too rock and pop”, whereas Furry Vengeance is “more poppy and cheesey”. “It just sounds right”. Later he concedes “I like the music, in this band, previously I have played music that I haven’t liked”.

As for Andrew’s inclusion in the band, he asks Barry “you must have some really good blackmail on me, you always rope me into stuff”. “It’s like the cat from Shrek” with his eyes, he said referring to Barry’s power of persuasion.

The atmosphere around the band is very laid back, Andrew adds “I’ve been in bands where it’s almost been too serious”. “At the end of the day” Calum agrees “if you’re  playing music you want to have fun.. if it feels like a chore you shouldn’t be doing it”.

So with new members, there is new material coming along, with one of Ryan’s compositions almost finished and a couple of other ideas in the pipeline. But the band is an extension of what Ryan and Barry have been doing and adding a different perspective to previous songs. “The melodies have been pulled together and stretched” Barry says giving one example.

Of the Showcases, Barry’s looking forward to seeing Toby Michaels’ entrance (referring to Toby sliding down the bannister at a recent gig, which was missed by the person on lights).”The showcases are really good for”, Ryan is interrupted by Barry, “showcasing”. Full of praise for the quality on offer, Barry wishes this wasn’t the case “I wish there was a lot of s*** bands, that way we would do alright”. Calum notes that one of the challenges of selling tickets is that not many people know what Furry Vengeance is “I seem to be facing this challenge all the time” Barry concedes “It seems like every Christmas, I’ve got a f****** new band”.

After the showcase, the band are already booked to go to Liverpool as part of IPO 2013. Before that there are a few gigs locally in order to fund the Liverpool trip. They are looking forward to playing the Cavern Club and the increased exposure that a gig like that offers. There is also a gig in London, although confirmation is pending. Barry is setting his stall though “I don’t want to get famous, I just want to play some f****** good gigs” whilst he acknowledged the challenge of playing in front of a non-partisan crowd. “Calum wants to take us to America….. It could be possible”. Andrew adds “we’re just chancers” clearly indicating that they will take whatever chances that come along and enjoy “the journey”. With echoes from the last interview in May Barry’s ethos remains unchanged, very much “you’ve got to be in it to win it”.

So whilst I made move to leave the guys to practice, I noticed that the Monday night weather was  worse than it had been an hour earlier , but at least I had a smile on my face.

Tickets available for the showcase from www.IronworksVenue.com or from one of the band.

For more info on the band please check out Furry Vengeance Facebook.