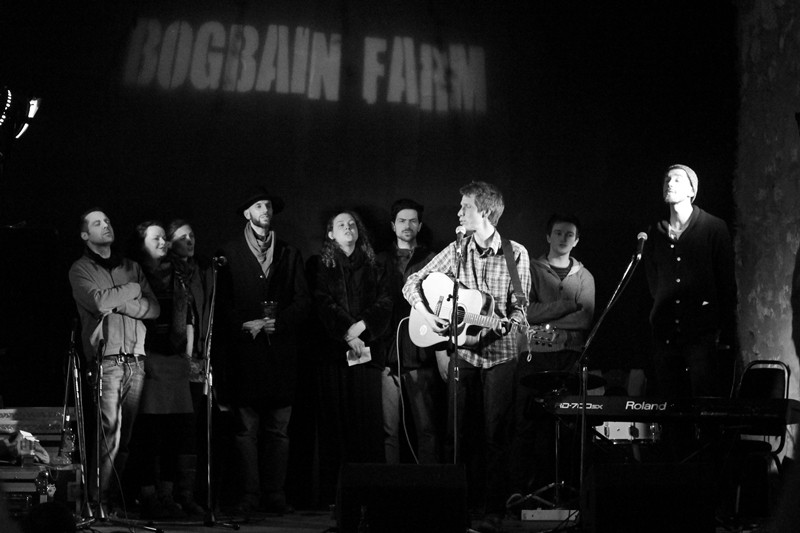 A review of of the Olive Grove Records Roadshow at Bogbain Farm on the 8th of March. 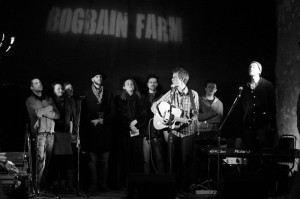 Tonight Bogbain featured a showcase of the talents of 3 bands associated with Olive Grove Records; Randolph’s Leap, The State Broadcasters and Jo Mango. All three are based in Glasgow and this was an ultra mini tour of two gigs in Bogbain and then at the Woodend Barn in Banchory  on Saturday night.

Bogbain was the perfect setting for an evening of relaxed tunes with lights draped like stars across the ceiling and hay bales for seats. It’s not for nothing that Bogbain won Venue of The Year at the Scottish Trad Music Awards. If you haven’t had the chance to pay them a visit then you really should put it on your ‘must do’ list for 2013.

“It’s nice to see people taking in their surroundings and being presented with sounds in unusual settings.” Adam Ross – Randolph’s Leap

“We really love to play in different places too. We’ve played in greenhouses, underground stations, panopticons, living rooms, barns – all kinds of things! I think for us, because we have such a tiny quiet small intimate kind of a sound, your average cave-like rock venue just isn’t suited to enjoying that to its fullest…” Jo Mango 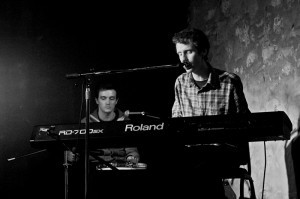 Randolph’s Leap were first on and Adam Ross (originally from Nairn) confounded initial impressions of yet another angst ridden folky singer song writer, by delivering witty songs, clever lyrics and a knack for telling a story, something that is all too rare in these times of insipid pop songs about love and rejection.

Standout highlight was ‘Isle of Love’ which could easily feature in the latest advert for the Scottish Tourist board, as Andy waxed lyrical about an Island on the North Atlantic and its wildlife. The final song ‘Going Home’ featured massed backing vocals courtesy of members of all the bands on tonight’s bill. A theme that was to be repeated throughout the night with band members interchanging and helping out with each other’s set.

“Collaboration is what music is all about. Music only really comes alive when you play it to people – so I like to think of performances as a bit of a collaboration with the listeners. They make it as much as we do” Jo Mango

“It’s something I very much approve of and is something we’ve done since our early days as part of The Wendy House Collective when we all played on each others stuff at gigs and even on records. I rather like the genuinely spontaneous ones best but most people these days seem to want to rehearse.” Graham Black – The State Broadcasters. 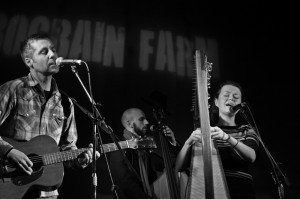 Described as ‘Quiet, Twinkly, Melancholy, Pop music’ on their twitter biog seems a fitting enough description for The State Broadcasters, although any melancholy was nicely balanced again with good humour and a refusal to take things too seriously. They continued the naturalist theme started by Randolph’s Leap on ‘Isle of Love’ by opening with ‘Kittiwake’ from the album ‘Ghosts We Must Carry’ Andy Ross appeared on stage again to assist with drumming duties on ‘Trespassers’ which for me was a highlight of the set with it’s 3/4 Waltz timing and refrain of ‘I will resist’. 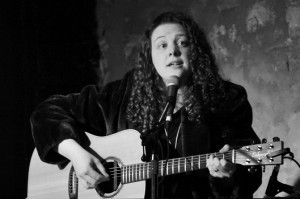 Jo Mango finished the evening off and again any melancholy in the songwriting was balanced with humour and possibly too much of an insight into her psyche! Be aware, if you buy her album ‘Murmuration’ from Bandcamp.com she will check your address in Google Streetview and possibly even leave a tray of lasagna on your doorstep!

Along with songs from Murmuration she performed her latest EP in full, which was, for want of a better phrase, a concept EP based on an old African Legend about a Princess receiving unwanted attention from an amorous king.  ‘The Black Sun’ continued with the ornithological references that kept springing up throughout the evening. A mournful ode to a starling that she found dead in her house after returning from holiday. This final song featured a ‘secret choir’, again of other band members who were scattered throughout the audience. Along with accompanying her singing, they fluttered bits of paper to imitate the starlings wings – a genuinely spine tingling moment.

Further Photographs from the night are on the Inverness Gigs Facebook page.

Randolph’s Leap will return to Bogbain in May as part of Brew at the Bog.

Information on the first announcement of Brew at the Bog 2013.