A review of the Ironworks Easter Showcase on the 1st of April , 2013.

The second night of this season’s Showcase gigs had as diverse a line up as the first. Opening the gig was Ailsa Jean Lyall Matthews, playing a mix of covers and original songs about troubled relationships. Ailsa has a great voice and her version of Teenage Dirtbag shows a flair for arrangement. It would be interesting to hear her bring in some more musicians to see what she’s capable of putting together. Most of her original songs finished quite abruptly, and this is one area which could do with a little polish. Ailsa did seem a little nervous, so this could have been the cause. This should be easily fixed, and based on this performance I’d expect to see Ailsa getting booked for a lot more gigs.

Dougie Burns was next up with some straight up, good fun rock and roll. The band could have been a little tighter, and unfortunately they were also hit with some issues with the sound. We couldn’t hear the lead guitar over the front of house speakers for the first two songs he played, and the guest vocalist’s mic was also pretty low throughout the set. The full band line up did a good job of raising the energy levels of the crowd, and for a band on so early in the line up they got a good response to the sing along chorus in ‘Driving in my Cadillac’ The harmonica performance was the standout highlight of the set. I’m not sure how he stayed upright until the end of the set, but I’d like to know his secret!

Another singer songwriter, Alice Bentley, was third on the bill and my thoughts were quite similar to those on Ailsa Jean Lyall Matthews. Her original songs covered the main themes of teenage life and the two covers were both interesting versions. She was spot on about the lyrics of Foster the People’s Pumped Up Kicks, and if (like me) you hadn’t listened carefully to the song before then it was an interesting revelation. Alice also seemed a little nervous, though in this case it could have been down to the throng of admirers lined up at the barrier. Her last song Scottish Rain immediately seemed more polished, with a nice melody and interesting lyrics. 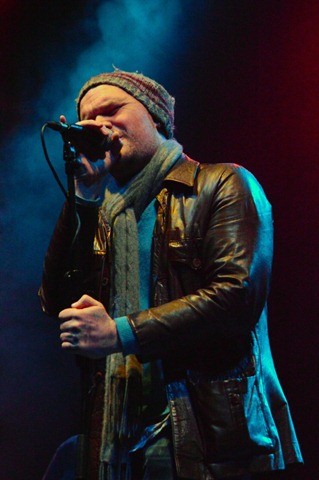 Fourth up was Little Mill Of Happiness. The last time I saw these guys was at the 2012 Summer Showcase, and to be honest I felt a little uninspired. I couldn’t put my finger on a specific difference tonight, but my opinion was changed quite dramatically by this performance. The band was rock solid throughout, with some excellent performances by all the members. There are some clever bits of arrangement with the three guitars, and plenty of nice riffs. I still think that in a live situation it would be good if all the guitarists didn’t play all the time (one of the most useful bits of science a band can learn is why something that sounds great in the practice room or on a recording doesn’t translate very well to large front of house speakers). Their last song was a more reflective number and the best song of the gig so far, really showing off the best bits of what the band are capable of. 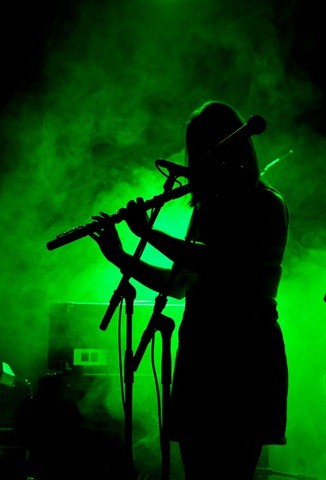 Following the theme of the evening we were back to a low key acoustic set with All Hat No Cat. The songs are eccentric enough to live up to the quirky name, delivering a refreshing set in contrast to the other bands on offer. The first song was heavy on the nautical nomenclature, and I couldn’t follow the story well enough to work out where the Johnny Cash references fit in. The arrangements set up with the looper pedal work well, though it’s operation could be a little smoother. The Sultans of Ping mashup (a result of a challenge from our very own Chris Lemon) is an interesting addition to the set and fits the band surprisingly well. By the fifth number they’re back to singing about sailing. And beer. Sailing and beer seem to feature heavily throughout the set. It wasn’t until All Cat No Hat’s final song, Drifter, that it occurred to me that Adrian Telfer’s lyrics and performance make me think of a young, middle class Seasick Steve.

Back on the main stage we were treated to one half of Chasing Owls. The duo are the best singers of the gig, and my first thought was that if the rest of the band live up to these two then they’re going to be a band to watch. Unfortunately they didn’t get the attention they deserved at the start of their set, but by the third song they had captured the attention of the audience back from the bar [it was interesting to note from Frank’s review of the previous night that the same situation happened with Washington Irving]. Their songs are emotionally engaging and full of dynamics, and they were the only band of the night to give me that Goosebumps reaction you get hearing a new band that are something special. Out of all the bands on offer it was Chasing Owls that I was checking out online when I got home.

In the next big contrast of the night,Blue Gum Ears were on next. By the reaction from the crowd they’ve got a strong fan base in attendance, though I’ve got to say that in my opinion there are better bands playing this style in the local scene. The lead singer has a good voice which suits the songs, and the band maintained the energy throughout the set. They’re not as tight as you’d expect from a good band of this genre and there’s not much variety in the set. Despite my opinions the crowd was at its most animated all night (and not just the four guys up at the barrier having the time of their lives), so the timing issues might just have been down to over-enthusiasm at playing to a home crowd on a big occasion.

Red Kites are worthy headliners, delivering a highly polished performance which shows off a nice range of influences and good attention to detail. All the musicians were very competent, and the arrangements were thoughtfully put together (though surely it’s bowing to social pressure to include a glockenspiel these days – last year’s indie band equivalent of chefs foraging for their own ingredients perhaps). The band is relaxed on stage and rock solid throughout the set, suggesting a lot of hard work behind the scenes. With the studio tricks available these days to tighten up a recording, Red Kites are the sort of band that you would only get a full appreciation for when you watch them play live. The last song of the set was superb, and gave the band a chance to show off a bit. I had to dash as soon as they finished their set, so I don’t know if they came back on for an encore – but I left the building to the crowd shouting for ‘one more choon’ more convincingly than I’ve heard for a long time…

See the review of the first day of the Ironworks Easter Showcase.