An interview with Larry Gott of James about Belladrum, the way forward and new music.

Speaking to Larry , guitarist with James, there is something very reassuring about the man; someone in control but still driven, not separated from the world by fame and success. Perhaps it is his Manchester accent or his very evident passion for music. We caught up with Larry, in between the band returning from playing Prague, in the Czech Republic, and preparing for a gig in Greece.

Whilst the band have not played in the area since 2007, they did visit Wester Ross in November last year. Perhaps not an obvious choice, but the opportunity to “make noise and not bother anyone” free from the distractions of London and Manchester was too great to turn down. Whilst not recording per se, it was a good opportunity to plan ahead; “more a writing session, we recorded the ideas for later.”

Larry is keen to express his gratitude at being asked to perform at Belladrum (“We were very honoured to be invited back”) and reflected back on some of the feedback they received about the gig in 2007. “It’s very special, very sweet, very touching”, he adds with a strong air of honesty.

Last time they were at Belladrum,  Larry had the opportunity to check out The Twang among others but this year, with him being joined by some of his family, the choices will be led by what they decide. They will also have less time as the band are playing The River Party in Greece on the Thursday night. “It’s a bit tight” reckons Larry, describing a flight from Greece followed by a bus trip up from London to get to Belladrum.”We’ll get there in plenty time” he reassures.

Larry is a keen advocate of new music, living in the Northern Quarter of Manchester with easy access to numerous venues from The Dry Bar to Night and Day. “I get lots of opportunity to see  live music. There’s some good interesting music coming out of Manchester as there always has been, carrying on the great tradition”. He refers to bands including Dirty North, Frazer King and The Travelling Band.

He acknowledges that a lot of bands can be “much of a muchness or copycat acts”. But what catches the ear for Larry? “Good music” he replies, and with some consideration he adds; “You see other bands and they’re not trying to be outrageously different, they just have something, a quirkiness in their sound that makes you listen. There’ll be a couple of really good well constructed songs”. With that combination it creates that Eureka moment or in Larry’s terms “we’re onto something”. Indeed it is that ability to see “a natural talent” that is important for him.

Talking about music for the festival, Larry is very attuned to what is expected for the slot and trying to match the desire for a party with a strong selection of tunes. But for the actual set list Larry takes a back-seat. “I stepped out of the debate ages ago”, he admits; “I can’t be done with this back and forth and analysing it and everything” His solution? “Just put some bloody good songs together and play them brilliantly”.

There will be room on the set-list for a couple of new songs, including “Curse, Curse, Curse” which he describes as having the “hallmark of a single break through,” he adds “you get that every now and again”.

Larry talks about the drive of the band; “We’re not chasing ‘it’ to get on people’s radar, we’re already on people’s radar”. However he describes the desire to produce new material that has the same effect as earlier material. “It would be nice to come up with something not historical ” referring to the danger of them being considered purely a “heritage band”. Larry adds “we don’t just play all the hits, we’ve got the energy and the vibrancy of a young band and the hunger to some degree, we’re still after that brilliant performance and it all coming together on the night“

The headline slot at the Garden Stage awaits James  and whilst the weather report may be hinting at something different, we have no doubt that, metaphorically, lightning will strike twice.

in late 2012. You can keep track of James at www.WeAreJames.com . 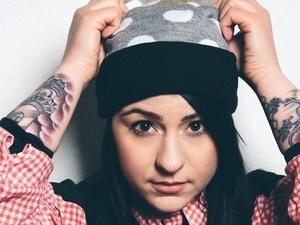