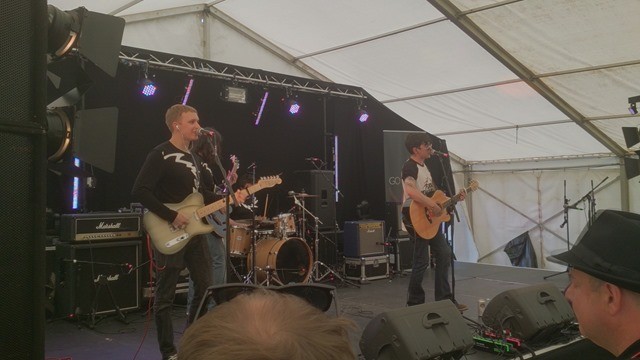 A review of Furry Vengeance  at Seedling Stage, Belladrum, 2nd of August, 2013.

This was Barry Mackay and Co’s first festival slot and from the outset they were determined to enjoy themselves. Furry Vengeance seem to be continually evolving and have fleshed out their sound even further with the addition of a sax player who appeared on ‘I Shouldn’t be Driving’ and ‘Love is a Beautiful Thing’.

A good size audience in the Seedlings Stage were treated to a band who are in form and clearly having fun. They briefly became ‘fluffy’ Vengeance as ‘Call My Name’ was described as being written for Barry’s wife. He then took no considerable delight in pointing her out as the poor lady blushed under the spotlight. The song itself is a sweet little ode and the lady herself seemed to enjoy it, so on that front it can be deemed a success!

Lyrically they may occasionally stray into the cheesy side of indie pop, but they play with such verve and enthusiasm that to hold that against them would seem churlish. ‘Little Ray of Sunshine’ is a minor hit on YouTube (20,000 views) and a cracking indie pop tune that certainly deserves a wider audience.

After the next few gigs FV will be taking a short break to concentrate on writing new material but we were assured that they would be back soon.