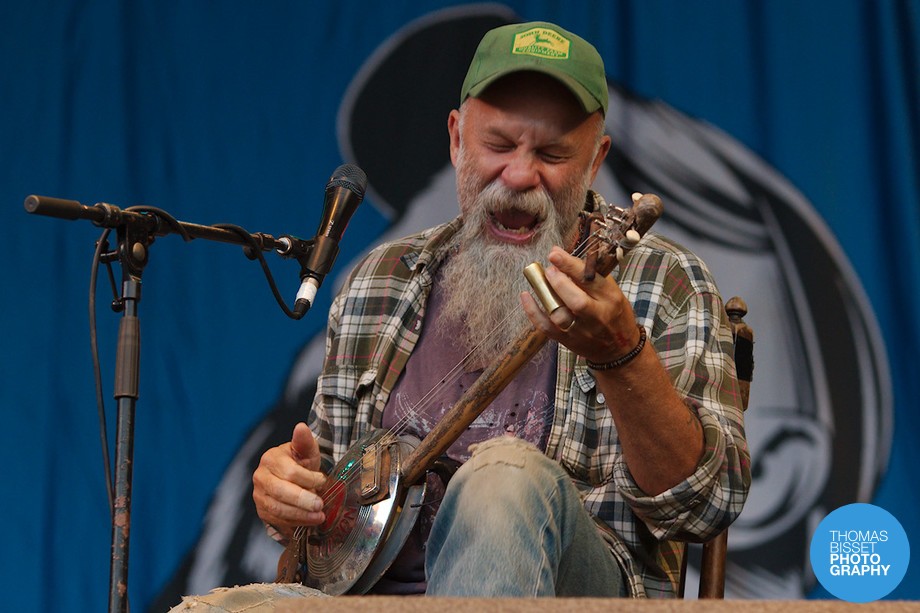 A review of Seasick Steve at the Garden Stage, Belladrum, 2nd of August Belladrum. 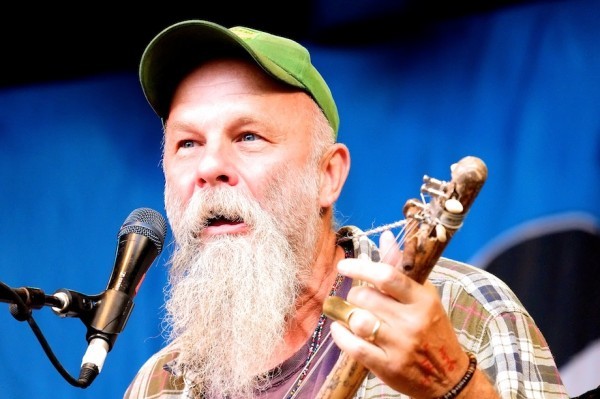 No sooner has he sat down and struck the first chord, a string breaks on his cigarbox guitar. ‘I can’t believe it’, a smiling Steve says, ‘ I’ve had the guitar six years and never once changed the strings, and it broke here of all places, where it all started’. Belladrum was the first festival he had ever played at after being persuaded to come by Rob Ellen. ‘The last festival I had been to was in 1969 and I didn’t like it very much.’ Of course after that appearance in 2006 he’s gone on to play on Jools Holland, other festivals all over the world and sold tractor loads of his albums. But he’s at pains to remind us that it all started here and it’s not something he’s going to forget it in a hurry. Arguably one of the best bluesmen of the modern age he plays an absolute blinder.

The cigar box is discarded for the Hubcap guitar and spotting a group of lads in the crowd decked out in John Deere branded clothing, he recites a poem about a farm before then playing ‘On the Farm’. Swapping instruments again he brings out what he calls the Diddley guitar, essentially a string nailed to a plank of wood, with the handle of a Chevy van attached to it (‘But that don’t do nuthin’) and we are treated to a ‘Diddley Bow’ and ode to the same. It’s impressive that he gets such a noise out of what is essentially a very simple instrument!

A brief pause in the set and he muses, ‘I just wanna borrow a woman’, so off he goes perusing the crowd for a likely suspect, he might be in his seventies but there was no shortage of volunteers. A young lady by the name of Saskia was guided on stage to be serenaded face to face with ‘Walkin’ Man’. You Say Jump, I say How High?… And you Say Walk, And I will Walk to the end of the line and back to you.

Although this wasn’t a homecoming in any real sense it felt that Seasick had returned to his origins in part and it felt that we were privy to something quite special.

Ballad ‘It’s a Long Way’ invited audience participation and elicited the response, ‘man you guys are cool’ from a clearly moved Steve.

Such was the enthusiasm for him that I got a row from a lady standing beside me who berated me for scribbling notes and not dancing. Duly chastised, I put my notebook back in my bag and enjoyed the music. Sometimes it’s nice to be reminded that while I’m here to review the bands I’m also allowed to enjoy them too. So that’s exactly what I did.

Photos below as watermarked or Roddy McKenzie.