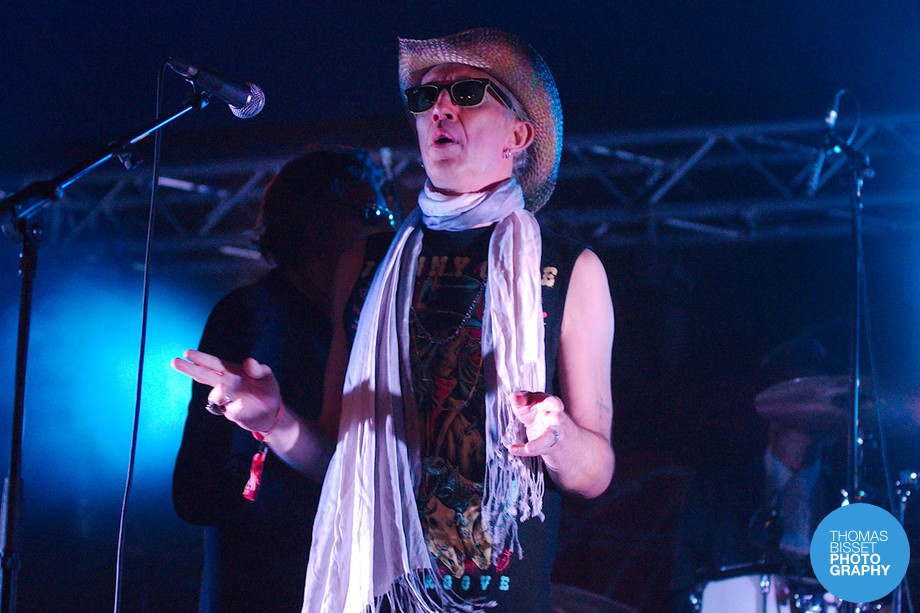 A review of Friday the 2nd of August at Belladrum 2013, including The Whiskys, Brown Bear and the Bandits, Dorec-a-belle, Miniature Dinosaurs, The Straits , Dingus Khan , The Oxides,  Prides and Alabama 3

Following the persistent rain of Thursday it was pleasing to see the ground was drying out as a traditional Scottish summer took another turn, this time for the best. It was hard to believe as we peered out from out tents that the ground that we had squelched across only 24 hours earlier, we would soon be sitting on.

A quick survey of the site revealed that steps had been taken to minimise the effect of the rain, as some groundwork had been enacted. It was also noticeable that by placing the Garden Stage out of bounds on Thursday it had a centre court presence of place as the grass looked in great condition to meet earlier arrivals. 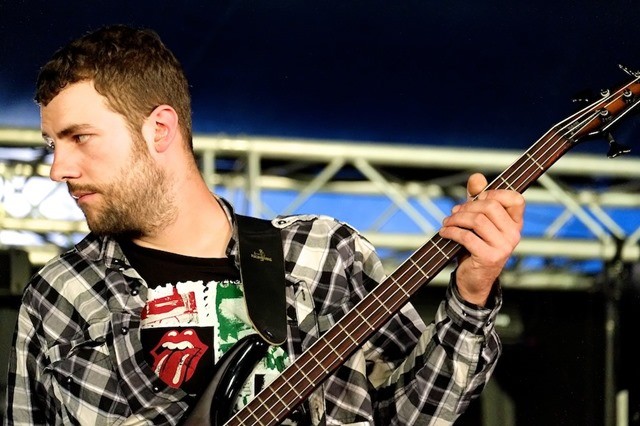 First stop was down at the Hothouse Stage and the Whiskys who were drafted in to replace Tich who had pulled out . The message may not have got across to all as a few were flicking through their lanyards to see if they had got their times mixed up. But to their credit they stayed and were rewarded by the first of two sets by the band today. The second set, which was planned, being on the Potting Shed Stage  was later in the evening. 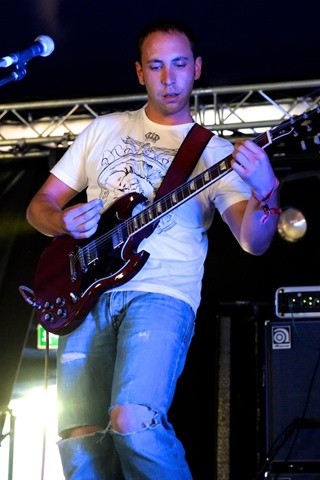 With the large tent to fill with their set, the Whiskys delivered their beefed up sound to maximum effect. For example, new song, ‘Subject to Change’ is heavily drum driven and the new dynamic is very evident in the delivery of this song. It is real angry edgy rock, straight from the roadhouse. Equally ‘Missed The Point’ rose to the occasion and was very guitar dominated. With a second album approaching it would be interesting how the first album would have sounded under the current line-up, although ‘Dark Cloud’ and ‘No Regrets’ still evoke the original spirit of the Whiskys. With it all too easy to play the familiar, the Whiskys wrapped up their set in fine style with new song, ‘Stay Lucid’. 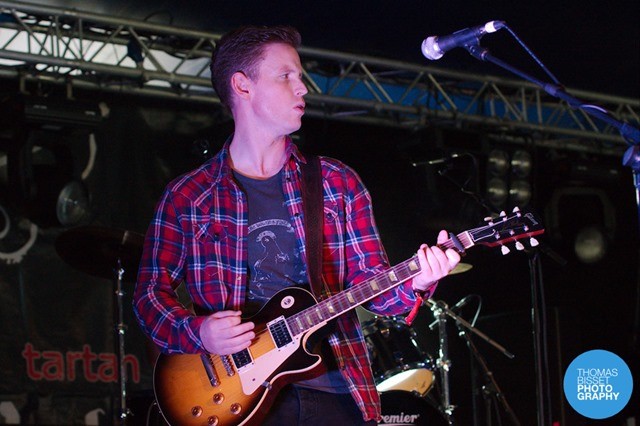 Brown Bear and the Bandits were next in the Hothouse, but the first two songs, although delivered powerfully, washed over me. It may in part have had to do with technical issues which were being sorted out as they played but a corner was turned at the third song ‘Soul Searching’. All of a sudden I was engaging with the band and the band’s energy and shape emerged. At their most raucous there were shades of the Arctics, but the uniqueness of Matt Hickman’s vocal lends itself to wide range that this three piece encompass. This was a far cry from my previous experience of them when I was left a little non-plused by an acoustic studio song, possibly from previous BBC Alba coverage, the sterile studio atmosphere lacked character but today it was blossoming. 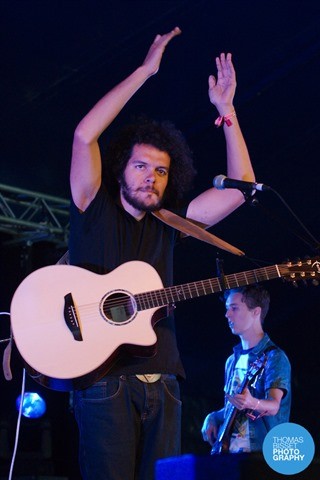 An instrumental is mixed into their set, which showcases the band’s passion and versatility, with a driving trad Celtic beat which encouraged the crowd to clap along. There is so much to like about Brown Bear and the Bandits as a love act, and the final song with it’s (extremely) drawn out pause was no exception. They have singles under their belt, and an album forthcoming. It will be awaited with great interest. 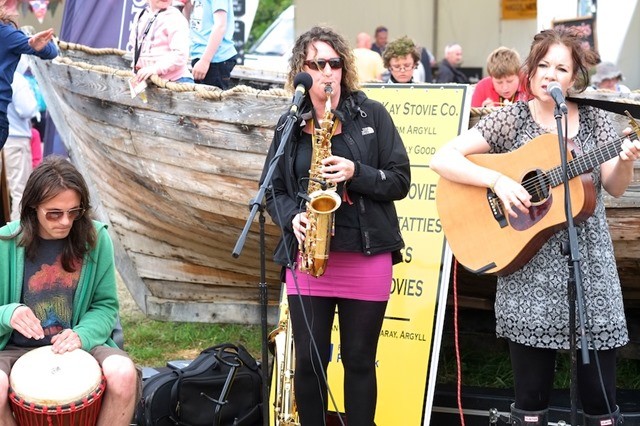 My wanderings in the afternoon took me to the busking stage in amongst the food village. Well, we all have to eat, and if back next year I heartily recommend the Thai pork curry! As always other meals are available. Luckily when I chose to dine, Dorec-a-belle chose to play! Having recently played the main stage at Wickerman today’s surroundings were a little different but their fusion of cafe culture and world music acted as a fine accompaniment even if their elevated position was somewhat blowy. 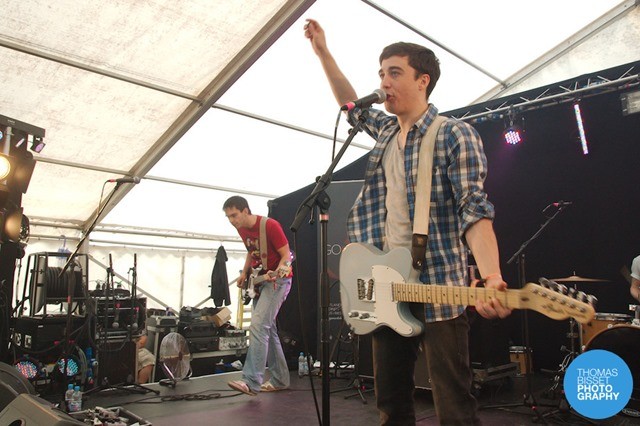 This led to a visit to the Seedlings Stage and turn of Miniature Dinosaurs. There is a great familiarity within their songs even if you haven’t heard them before they are so damn catchy. Take ‘Lemonade’, absolutely memorable with a dose of humour stirred in. Barry Maclean and Alban Dickson provide perfect foils for each other as their vocal mix is perfectly fused in a Killeresque and falsetto cocktail. Every song is really a single, including new song ‘Fly’ which, not unexpectedly, soars, as well as being particularly engaging. With a feel of Talking Heads there is so much to admire here. With Twin Atlantic showing how you can move up through the stages, there is no reason why Miniature Dinosaurs can’t take steps in that direction.

At festivals you tend to bump into people each year and spend a time watching each others recommendations. This year I ended up at The Straits with someone, who shall remain nameless, who told me they would cry if they played Telegraph Road. Thankfully they didn’t and it saved me from an awkward situation. This was effectively a greatest hits set played by a Mark Knopfler sound alike who had in his support a band made up of talented musicians and Dire Straits members Alan Clark on keys and Chris White who is known for his saxophone with the original band.

At times some of it was a little self indulgent but mainly it pleased a busy Garden Stage audience. For me, Romeo and Juliet was a highlight. I’ve always loved that song and was willing to accept it’s professional delivery over its less than original line-up’s provenance. Mind you that was tempered with Money For Nothing and Walk Of Life, two songs which may have epitomised the early days of MTV, but never came close to be favourites with me. Sultans Of Swing to end and they are almost forgiven. Tribute band? Offshoot? To be honest, nobody watching really cared. They enjoyed it and a dose of music snobbery over this won’t erase that. 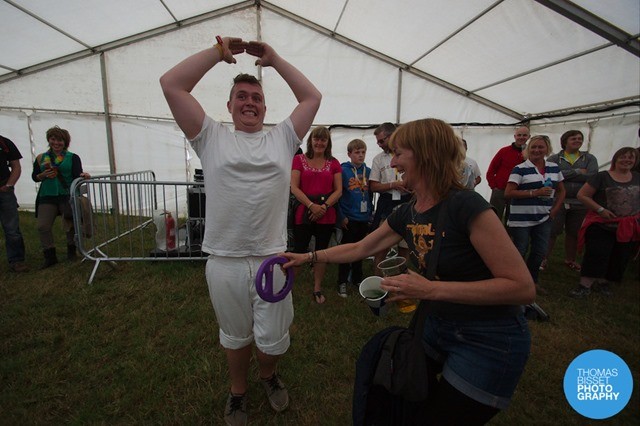 At the Seedlings Dingus Khan were creating a triumphant wall of sound. They have multiple everything; drums, guitars, you name it they have at least one. They also take turns in running into the crowd. If you are fortunate one of them may run between your legs. There is a lot of them and they all wear white, except the lead singer who wears a black smocklike outfit. This probably so that they don’t lose him. In amongst the antics, of which there were plenty, they create a wall of sound, and a really solid roughcast one at that, which may have something to do with the three, count ‘em, drum kits that they employ. However, there is subtlety in there but it is well disguised within their manic passion. 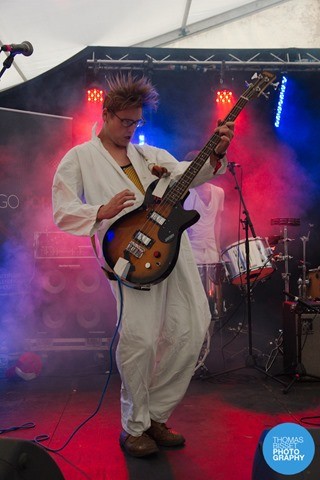 At times you feel they could convert (almost) to a boyband, but no, they assuage those moments and continue to deliver their well orchestrated cacophony. It’s perpetual motion and manic collusion, and ultimately an experience. One that one audience member was involved in when they were handed a guitar towards the end of the set. Who needs alcohol when a set can be that intoxicating. 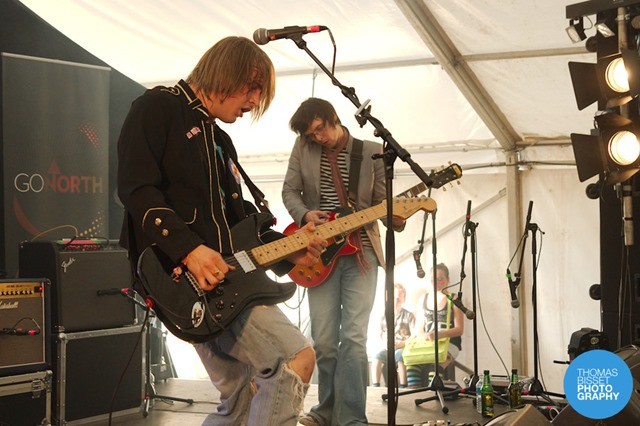 Also at the Seedlings stage The Oxides were delivering another explosive set. Eyes always focus on front man Jake, but today guitarist Pel was getting in on the action. I have never seen him so animated, so involved. There is a real character forming with the band and they have reached a whole new level with this performance. The songs may be familiar but they are being delivered with absolute precision. It’s great songs and a great performance. 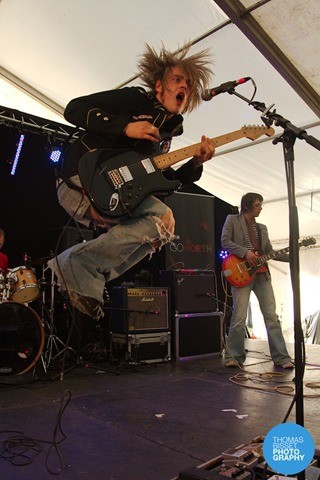 As Pel wilted, Jake never ceased. Some people are born to do this, and Jake is one of them. I really do not think he knows quite how good he is. They may slip in the odd cover and even a slow one, but  maybe, like a boxer going twelve rounds, even Jake needs a breather. When we got to ‘Going Overboard’ which rounded of the set we all got our breath back. In a word: wow!

Making it three acts in a row for me at the Seedlings were Prides. They are a relatively new band who are making waves, and a high profile slot at Brew at the Bog drew them to the north’s attention. They are making waves for a good reason; they hit a spot, and they hit it quickly. Such synth use evokes 80s memories but with the vision of today’s market. There is a level of euphoria, sometimes growing, sometimes obvious in each song and this lies in both the vocal and the instrumentation. There sound is, frankly, too big for the Seedlings stage. They are somewhat different to the formulaic line-ups and it will be interesting to see how far they can take this. ‘Cold Blooded’ a likely next release, and ‘Out Of The Blue’ were standouts; standouts from a very strong set. 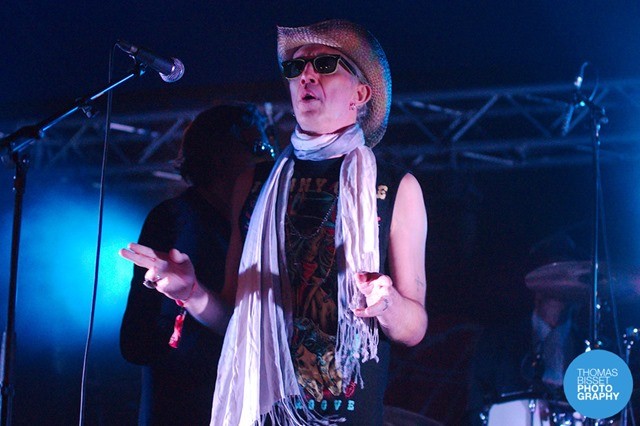 My night ended at the Hothouse Stage and Alabama 3. Their success lies in their live performances, and in particular their festival appearances, especially here in the north. In many ways it surprised me to see them in the Hothouse as I felt that their wide ranging appeal would have easily led to a main stage slot. But the Hothouse it was, and not unlike when Ed Sheeran appeared a couple of years back, it was overflowing. It was, however, good natured and all were happy to just catch a glimpse of the band. From the opening strains of ‘Woke Up This Morning’ they, and their audience were on united. 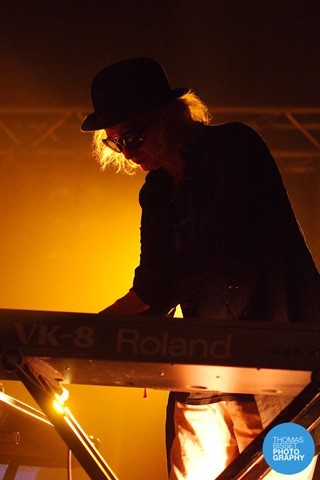 They whipped their followers into a frenzy, or their congregation as they should be known, as the driving beat showed no respite. It’s infectiousness poured over the festival goers and out onto the hill behind where many were happy to sit back in their chairs and receive it by a process of osmosis. Reverend D Wayne Love and Larry know how to conduct their choir especially those in the central pews who reacted with euphoria. Aurora Dawn lifted it higher as they brought the evening to a close. A large tent was made intimate and personal to each that attended. That’s hard to do, but the Alabama 3 did it.

With so much to see and do, the gloom of Thursday was well and truly a distant memory as Friday burned an indelible memory on each person that attended.

More photos of the acts: