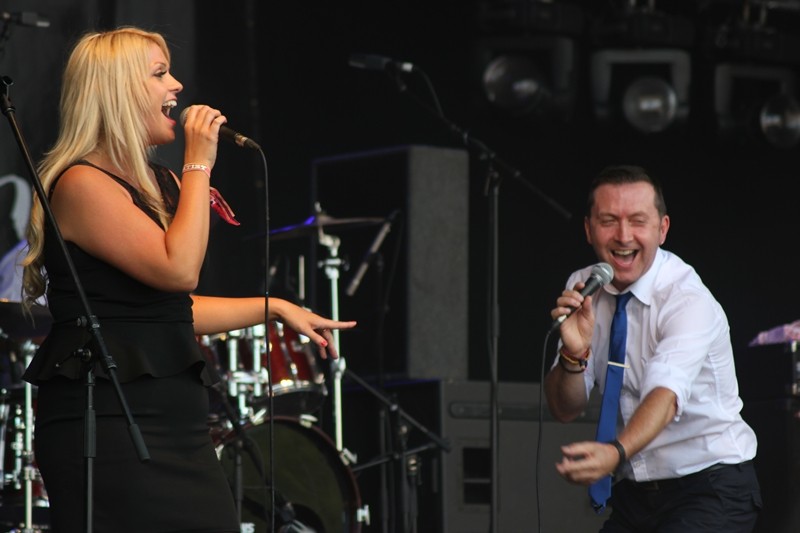 A review of Saturday the 3rd of August at Belladrum 2013 including Toby Michaels Rolling Damned, Dangleberries, Scooty and the Skyhooks, John Paul Palombo, Fat Goth and Pigeon Detectives. 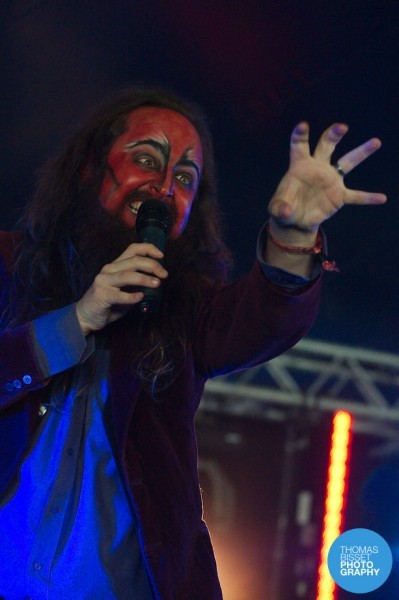 A Toby Michaels Rolling Damned performance is never your usual run of the mill, stand there and play affair, you always expect, and get, a lot more. When theatrical frontman Toby Michaels appeared with applied greasepaint you had an inkling that he was about to give a devilish performance. When he stated ‘Let’s Rock This Shit!’ then threw aside his jacket and shirt to reveal his Rolling Damned vest, you knew he was ready to rock. 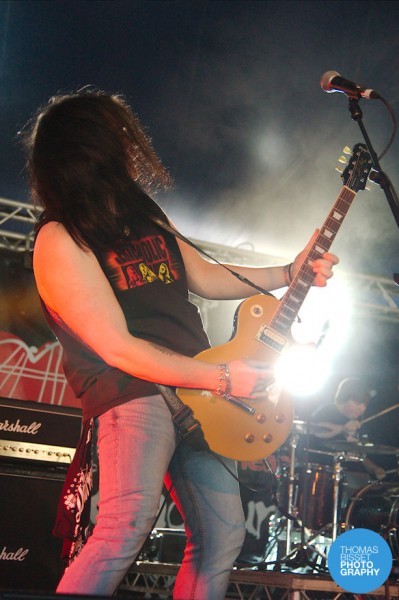 Toby strutted the stage as if it were a rock opera in the West End and with his Rolling Damned tore into a high octane set. As he powered through the set the make-up refused to run, even in the emotion of ‘Save Me’. Keen to spread the love he added a slower one, just for the ladies, before ramping it up again with ‘Hound Dog’. The Rolling Damned are a little bit of what everyone fancies and a red-faced Toby, make up or no make up, completed his allotted slot without leaving the stage. That in itself is quite some achievement. 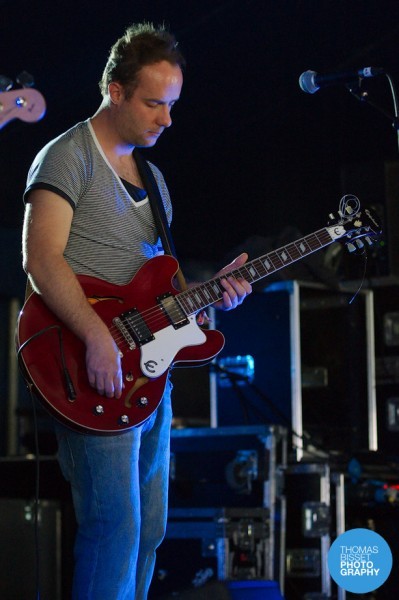 It is hard for the other band members to keep up with Toby, and it is probably best that they leave him to get on with although Johnny Gash at times imposes his personality on proceedings, leading the crowd with swaying arms. The Rolling Damned like their projects and I wouldn’t be surprised if the next one is Rolling Damned: The Musical. 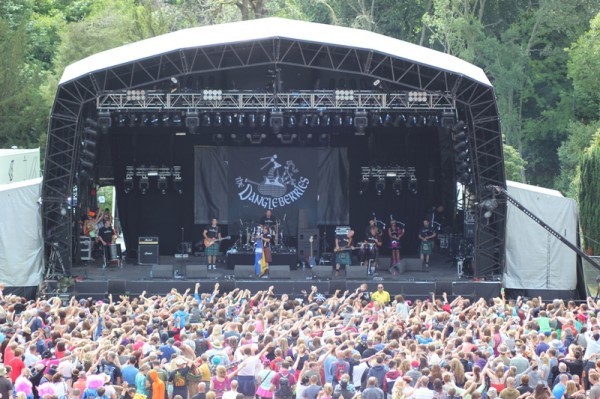 On the Garden Stage in their traditional mid-afternoon slot were the Dangleberries. Now celebrating their seventh appearance at the festival, no other band splits opinion as much as the Dangleberries. Those that love them turn up with their band t-shirts and flock to the front of the stage, and those that don’t are normally hiding back at their tents. Love them or loathe them you cannot deny they have a mass appeal.

The Garden Stage was rammed with festival goers, in what probably was the third biggest audience behind both headliners. It is all very manic with the mix of rock and bagpipes, and covers and originals. They even have their own version of the Happy Mondays’ Bez in Annie who puts more energy into the set and she just has a tambourine! The purists will say that they are murdering songs such as Snow Patrol’s ‘Run’ and Kasabian’s ‘Fire’ but the dad dancers and those with kids on their shoulders will no doubt beg to differ.

You can’t please everybody, but the Dangleberries please a very large number. So much so they play a second set up by the bar shortly after. Personally they aren’t my cup of tea, but I drink the green and peppermint varieties, so what do I know… 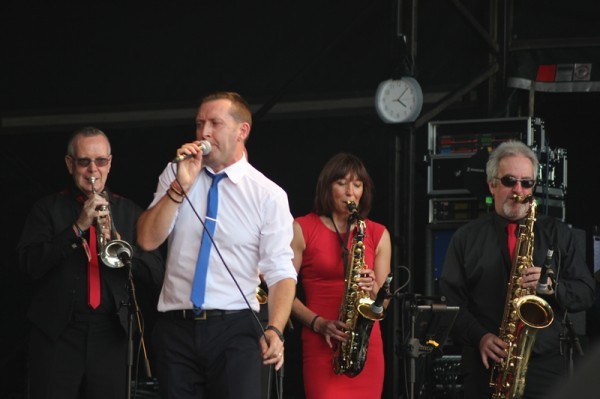 It would have been easy to have been pulled along by the exodus at the end of the Dangleberries set, but I was determined to go against the flow and see what the ever popular Scooty and the Skyhooks would be up to. The tide begun to turn as the Skyhooks struck up. The Skyhooks reformed in 2009 and have gone from strength to strength and are as popular now as they were back in the 80s. The line-up may have been adapted over the years but the current personnel are a tight outfit and put on a show which delivers classic after classic. 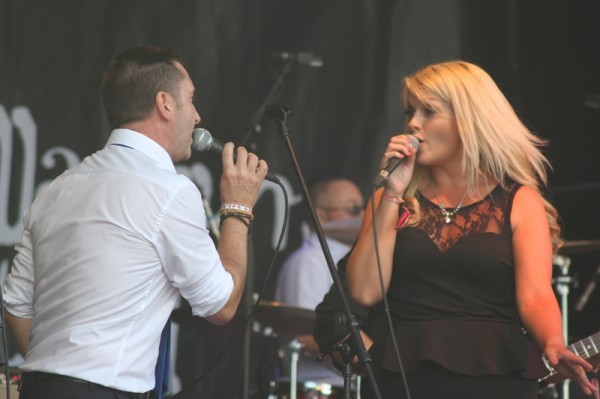 The energy of front man Davie Ross is matched by female lead, Sarah Mackay, and they show great chemistry when combining on the likes of ‘River Deep, Mountain High’. The horns section pack a real punch and the Skyhooks really know how to have a party. They’re a polished act; with the shine that you can see your smile in. 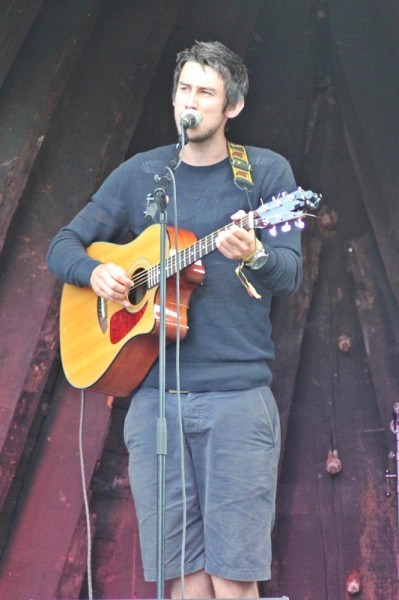 A wander down to the far end of the site and the Glachbeg Free Range Stage saw me take in one of those hidden gems that you find at Belladrum in the shape of Sheffield’s John Paul Palombo. Perched up high on the upturned boat come stage he wove magical tales in his songs. And each song did contain a story whether it be about being stuck with someone you don’t mind as in ‘Getting Along’ or his ability to take inspiration from from surprising places such as ‘Age Old Face’ a reference to his first gig in a band.

His first single ‘Jimmy’ was released in October 2011 and his second release’ ‘Heartstrings’ is due out in a couple of months. Such a long gap is due, no doubt, in his desire to get it just right. He ventured the once into cover territory with Kodaline’s ‘All I Want’, which is delivered with a haunting vocal. Occasionally he veers onto Ed Sheeran and Ben Howard territory but maintains a generally upbeat outlook. One to watch out for when he’s next back in the area. 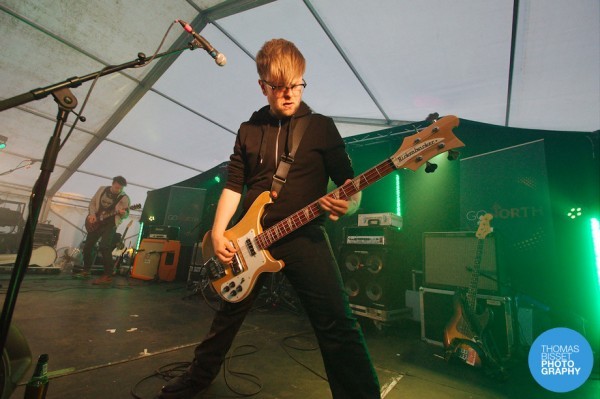 If there was one band that I didn’t want to see,  it was Fat Goth. I saw them tear the Market Bar apart at Go North in 2012, and swore that such a powerhouse display could not be repeated; one that was aided by its intimate and hallowed venue. So it was with a heavy heart that I made my way to the Seedlings tent. The memory of that night in 2012 wasn’t obliterated, but enhanced by the fact that they can destroy festival tents too.

Their sound is monstrous and pounding, but equally complex. They have a bit more banter about them tonight but those light touches take nothing away from their overall demeanour. It all appeared to be over all too soon, as they were told to end their set, but after an appeal by the audience, they were allowed to slip in a one final dirty one at the end. The surf may be down, but Fat Goth are well on the way up. 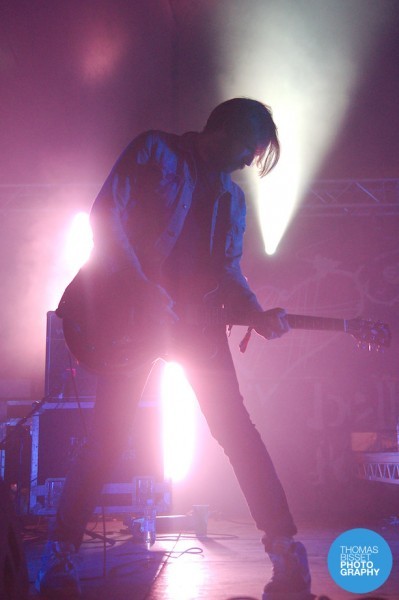 The penultimate band to play the Hothouse Stage were the Pigeon Detectives. The crowd were really up for this one and there was general movement towards the front of the stage in anticipation of their arrival. When they did appear, it was little less than carnage in the middle. Any energy that was left in Belladrum was used up by Matt Bowman, as he whipped up the crowd. Opening up with ‘I Don’t Mind’ from most recent album ‘We Met at Sea’ this is a return to those early days, in fact back to that time when the Pigeons last played Bella. The songs from the first album were arguably best received with ‘Romantic Type’ setting the tone early. 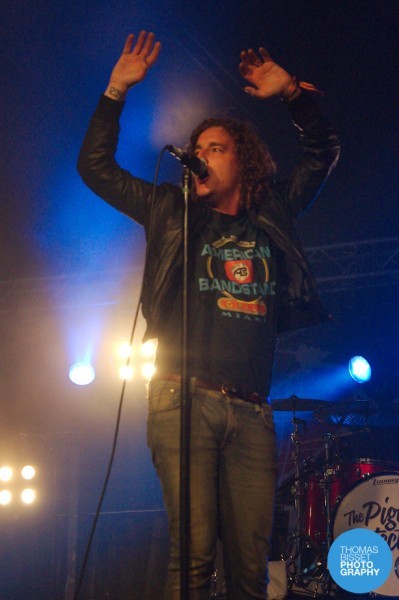 There is little variation in a Pigeon’s set, and it is more about the experience at times, so much to the point that you forget that Matt has a very able band behind him. He doused the crowd in water, indulged in crowd surfing, and made 100 plus get on each others shoulders to bounce along. As he said ‘we’re here to make memories’; he was right.

As we left the tent, I left the headliners for others. That was my festival complete. Every year always seems better than the last, part due no doubt to the freshness of the memory, but also due to the ability of the Bella organisers to never rest on their laurels and produce a festival that brings people back year upon year.

More photos of the acts: