Ed Muirhead describes his music as a combination of  “blues riffs, folk songs and jazz chords”. His most recent album, “Simple Life” is due out  in October and sees him play a 6 date tour of Scotland, which brings him to The Eagle on the 18th of October. We were able to catch a few words with the Dundee-based singer prior to his visit. 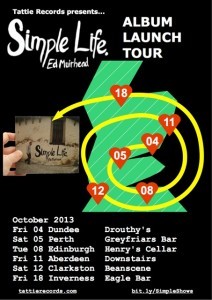 What was the thinking behind new album “Simple Life”?

I began this year working on a blues album, and had a number of songs in mind.  Then in March I spent time with Robin Wynn-Evans at TPot studio in rural Perthshire (had to trudge for 2 miles through snow drifts!) – the vibe of Robin’s place, his piano and my own mood that day led to another bunch of songs that are much more simple and flowing.  Some of these were sketchy ideas that got finished on the day (reading from my song notebooks).  I needed to get these out of my system – so in a short time I switched to an acoustic project and postponed the blues.

It was going to be an EP, but then a few more were added once I got home, and now we have 10 tracks on there…  The simple vibe is reflected in the album packaging: limited-edition card sleeves, handwritten lyrics and liner notes, and CDs that are being burned & lightscribed one-by-one!

You have an impressive way with an observational style  to your song-writing (from roundabouts to the end of the world) , how do you go about creating your songs?

The songs tumble out, from an idea or a picture in my brain.  In the past I played a piano or guitar and developed chords and choruses, but now the songs often come together before I reach an instrument.  Last year my day job took me all over the world, there was a lot of time travelling and thinking – and I wrote several songs with wee tune ideas on the page (Canada and France both appear on the album).  The Kingsway ode was written while driving from Dundee to Aberdeen, after getting stuck (again) at the traffic lights.  I managed to still remember the words and tune by the time I got home.

Sometimes they go through a few variations and changes of chords or key as they evolve, but the essence of each song stays.  I wrote “Stolen Moment” one evening from start to finish, based on a few words I’d had in mind for ages (most songwriters will know about these fragments that sit with you for months/years).  That song already earned praise from Findlay Napier at the Nairn Festival, he described it as “just a great song” – voting it runner-up in their songwriting competition.  I was delighted to sing it live for them last month during the festival.

How do you possibly follow up on the now famous “Ode to Kingsway”( a song about the now defunct double roundabout in Dundee)?

It’s funny how that song has really struck a chord with people, particularly around Dundee – I’ve been in the papers, on the radio and on television talking about the Ode to the Kingsway!  No plans for any other road-based tunes quite yet…

Who are your influences, both longstanding and contemporary?

One of my favourite things is listening to music – especially live – I get to gigs as often as possible and have seen loads of great folks in Dundee and around Scotland.  I love music that moves me, whether that’s physically with the beat or volume(!) – or emotionally – here’s some folks I’ve enjoyed live recently: AMWWF, Whigs & Rakes, Esperi, Kings & Cowards, Broken Stories, Strangers Almanac, Lidh, and last night a new discovery at a Rusty Hip Collective gig: Yawn.

For songwriting influences, there’s a long list, but I’ll pick a few that come to mind!  Paul Simon, hooked as long as I can remember… his way with words and tunes have stuck with me.  Stevie Wonder is a hero, the passion in his voice and his all-round general talent.  John Martyn is amazing, the essence of his performance was captured on Solid Air.  Adam Duritz is another big influence, ever since August and Everything After.

The life of a singer songwriter can be a harsh one, ever fancy returning to playing in a band?

I do still play in bands, pounding the drums for “Trampled By A Horse” (post-punk/alt-rock) and occasional keyboard duties for other projects…  – and will pull together a band for my own stuff to help give more life and breadth.  Particularly once I get the (postponed) blues album underway, things will move up a gear!