Carnivale showcases some of the best local talent in the Inverness area, Ross Smith and Claire/s Brother played the latest installment on Friday night ahead of Lionel’s set in Mad Hatters. 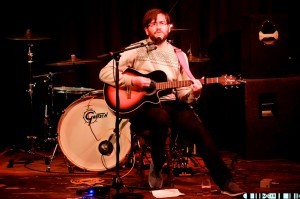 Making this his debut gig, Ross Smith took to the stage first. He made no secret of his nerves, yet continued to play a strong set. It would be fair to describe it as an intimate gig, with only a few in the room to witness his set, but for those of us who were there it was truly enjoyable.

Ross’ lyrics make his music easily relatable and interesting to listen to. He played through some of his own songs, such as “FCD”, “Writing On The Wall” and “Untitled” as well as a cover of BMX Bandit’s “Disco Girl”. He also allowed his charm to shine through between songs, there was never a dull moment.

In the spirit of things to come, Ross renamed himself as ‘Megan’s Brother’, which led us on nicely to the second set of the night from ‘Claire/s Brother’. This being the side project of Red Ronson’s frontman, Andrew Barnett. By this point more people had arrived to join what was sure to be an interesting journey through Andrew’s mind, playing his debut gig under his new pseudonym. 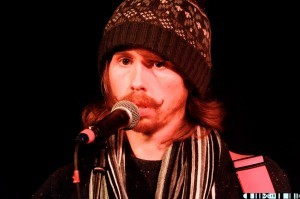 Never one to really be taken overly seriously, he played some songs which he pointed out were useful advice to his kids (we should all possibly take heed though…); “Don’t Bite Your Friends” and “Never Talk To The Filth”. Then moving on to “Boy Meets Girl” which has distinct similarities to ‘99 Red Balloons’ at times.

Ever the king of shameless promotion, he outed Red Ronson as his favourite band with the lead singer being his favourite member… he then continued to play through some of the bands best known songs, providing sing-along moments throughout. Acoustic versions of “Hate To Say I Told You So”, “Sweetheart Be Mine”, “Fall Back” and of course, “Salvador Dali” proved to be crowd favourites.

You can pre-buy the new Claire/s Brother album.

More photos of the night (including Lionel)