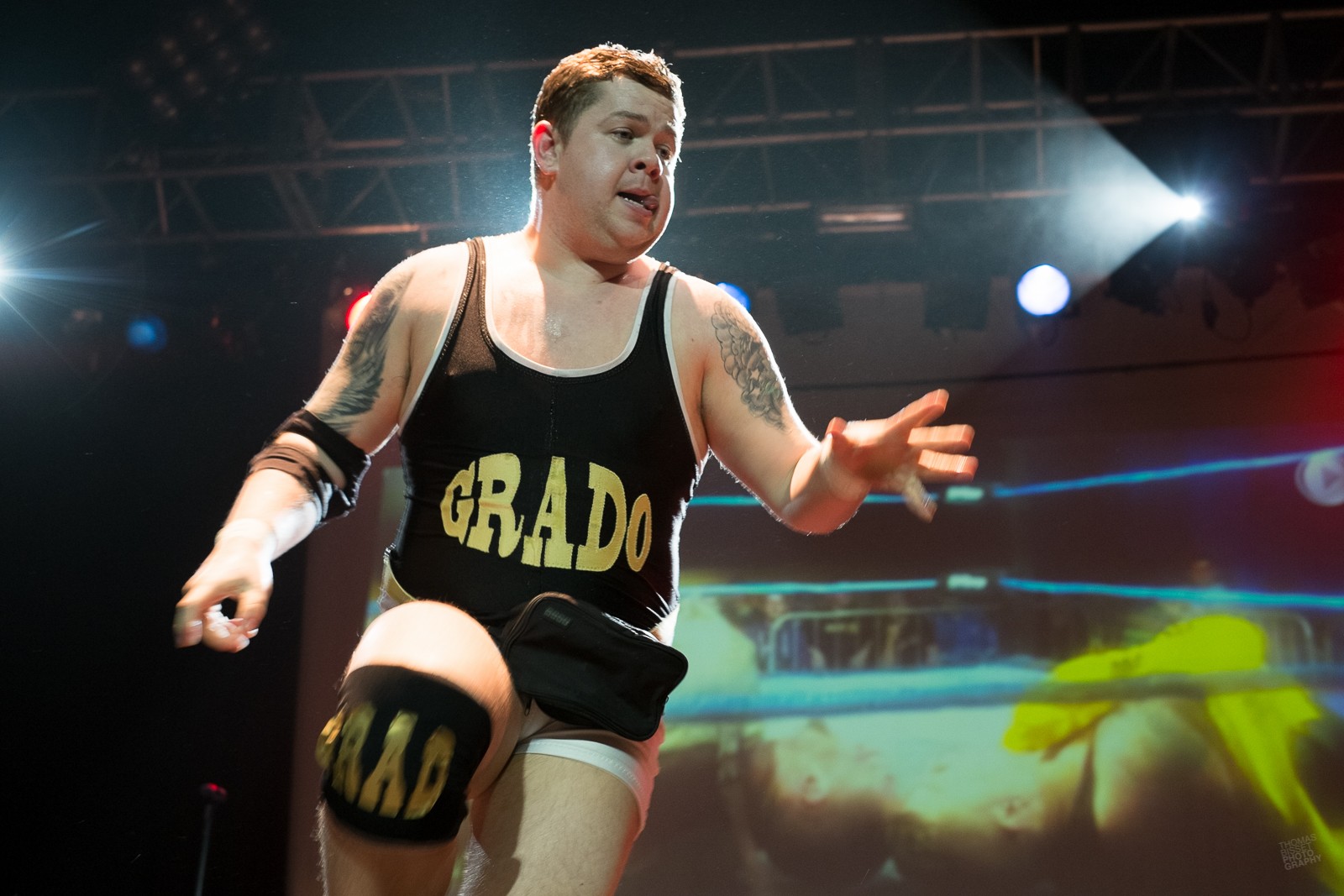 Whereas the first Rock ‘n’ Wrestle entertained a small, but lively, audience, tonight’s bouts were fought out in front of a packed Ironworks. The recent BBC programme about Insane Fight Club no doubt brought in many, but so too would the word of mouth from the first event.

The scene was set with a video of Premier British Wrestling to the soundtrack of Frankie Goes To Hollywood’s ‘Two Tribes’. This was followed by the introduction of the first bout of the evening, a transatlantic match up between Sonjay Dutt from the US and England’s Marty Scurll.

Bad boy Marty took pelters from the crowd as they got firmly behind the American. Comparisons to Peter Andre did not go down well with Marty. In a fast action meeting, Sonjay brought it to an end with two momentous back flips, one of the top rope, to get the three count on Marty.

The attention then turned to the music and the appearance of Toby Michaels Rolling Damned. The Rolling Damned know how to rock an audience and they did that tonight with their two songs. It was clear that Toby was in the mood as it looked more like a warm up for a match. However, Toby spent a lot of time on the floor, and I really hoped that this wasn’t a taster of what was about to come.

The third bout was to be the the long awaited grudge match between Jack Jester and Davey Blaze following the controversial end to their previous contest at the Ironworks which required Toby Michaels to be helped from the ring. Unfortunately due to injury Davey Blaze was unable to take part, and Jack Jester was about to leave the ring when he found out that a replacement had been found in ‘Unstoppable’ Andy Wild.

In Andy’s corner was Toby Michaels who was noticeably staying clear of big Jack. A gallant Andy Wild put up a brave battle against but to the dismay of the crowd Jack Jester once again prevailed. However, it didn’t end there.

When Toby Michaels got into the ring to tend to the prone Andy Wild he was attacked by Jack who had managed to get his hands on a chair which he whacked Toby on the back with several times.

He followed this up by ripping off Toby’s shirt and then giving him the corkscrew treatment on his back. Strangely some of the crowd were getting behind Jack at this point; maybe they were Ross County fans who didn’t have time for Toby and his ICT antics.

Once the dust had settled it was time for local DJ and wrestling fan Tich McCooey to announce the arrival of the next two to take to the ring, that being Kris Travis and Ricochet. They spent the opening few minutes strutting like peacocks before the bout exploded with some of the fastest moves of the night. The spectacular work of Ricochet gave him the edge over Kris Travis and put the crowd in fine spirits for one of the most eagerly awaited contests of the evening.

So it was mixed tag team time with Red Lightning and Carmel with Charles Boddington in their corner up against Kay Lee Ray and fans’ favourite Grado. Not unexpectedly there were dirty tricks aplenty as Grado and Kay Lee were set about by not just their adversaries but their cornerman Charles Boddington.

This match entertained with some great comic sequences instigated by Grado much to the annoyance to their opponents! Even the end of the bout was comedy as Grado pinned all three opponents to the floor to win it in style. The crowd got what they wanted there and more.

The penultimate match up was between Joe Legend of Canada who is now fighting out of Germany against Scotland’s Wolfgang. These were two big lads and there were some really heavy throws mixed in. At the end of the struggle Wolfgang, who played the Scottish card throughout, took the spoils even waving the Saltire on his victory.

Last bout of the night saw the return of champion ‘Bad Boy’ Liam Thomson against challenger for his title, Jay Lethal. The crowd were behind Jay Lethal throughout as Liam spent more time taunting and not actually wrestling. A lot of the wrestling took place outside the ring and a number of the excitable kids who were getting close to the barriers got much closer to the action than they were expecting.

With the match going the way of Jay the whole bout turned on an incident when a mistimed kick by Jay took out the referee. Liam was trying finish the fight off with the ref out cold as a replacement ref charged into the ring only for Liam to be denied. However, Jay’s concentration had gone now with his concerns for the referee and Liam claimed a fortunate victory. All this was mixed in with Carmel making an untimely appearance only to face Kay Lee Ray who set about putting her in her place.

So just as it looked as if the crowd were going to leave disappointed the intervention of Grado brought the show to a close when he dealt out some of Liam Thomson’s own medicine to him. Now, that would be a match-up that the fans would want to see. With Liam having left the ring the lighter atmosphere led to a bit of fun between the remaining wrestling heroes and some young fans.

So a full house at the Ironworks and a crowd were sent home happy, and once again some parents would have kids who they would have to scrape of the ceiling when they got home as their excitement was still evident when they left the building.