Garden of Elks return to Inverness in April as part of The Ironworks Easter Showcase. We caught up with Niall Strachan and ended up talking about about the band’s sound, new EP and their fantasy festival.

One review of 2013’s EPs described it as “ a gloriously noisy DIY effort” Is that what you set out to produce?

Well we did do it in our friend Matthew Scott’s studio in Glasgow (Bakesale Recordings) so I guess it wasn’t a pure DIY release as he did all of the recording work but I will accept we can be noisy and we released it ourselves so as pigeon-holes go we can’t complain. Better than ‘shit dull poor effort’.

We recorded all of our music in our first year with Matt and there is a definite lo-fi aesthetic that we embraced as wanted to move forward quickly but we are moving towards a much bigger sound for sure at the moment.

You were nominated in the “Best Rock Alternative” category for the SAMAs 2014. Do such nominations validate what you are doing as a band?

It was really flattering to be nominated as we feel we are only getting going with this band but it is not something you can pay too much attention to. Being nominated doesn’t validate what are we doing but it does give you a wee tingle in the antlers to realise people are into what you are trying to achieve as a band.

The only things that validate what we are doing start and end with the music we are making. The sense of fulfilment you get when a song you’ve been working on in the practice room comes together is really more than enough validation. It spurs you on to keep trying to top the last song you wrote, and hopefully make you a better band.

2013 was your first full year as a band, and a successful one it was, but where do you see yourselves going forward in 2014?

Well we have been writing a fucking shed load of songs and we are now in the process of drilling the best ones in our practice room as we plan to record our debut album pretty soon. All the songs are sitting well together and it is just a case of picking a few days to record and battering it out. So we will have our debut album out this year for sure.

We have just finished recording a new EP which we are putting out real soon and we have a friend working on a video so keep your eyes open and your ears clean. The EP release could maybe tie in with our show at the Ironworks on 20th April and we are also playing Glasgow with an awesome Canadian band called Solids on 6th May. After this we will be recording and maybe playing some festivals….who knows??

We would love to get down to England later in the year when our record is done. And maybe elsewhere in the world…but people will have to buy t-shirts and stuff before we can afford all the petrol.

You are back in Inverness at the Ironworks Easter Showcase as a GoNorth act. How important is goNORTH, not just to you, but to other emerging acts? 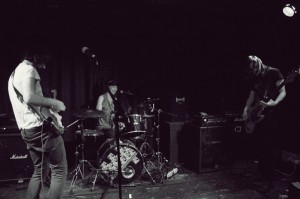 goNORTH has been great for us and have supported us from our first release. They are on organisation who are really fighting to get bands/artists great opportunities in Scotland and further afield and are a real positive force to help you try and get to that place you are picturing in your head

With festival announcements coming out for the summer, if you, as a band, were curating your own stage at a festival, who would you have playing it?

I think if we had the chance it would be a bit weird and wouldn’t go for the ‘safe bet bore’ programming that an increasing amount of festivals are falling in to. I always love to find new bands at festivals i have never seen before. Do you really want to go and stand in a field and see a band you have seen 20 times before play all the same shit?

Bring back the sense of discovery that they have in a lot of European and American festivals.

The stage would be called The Elk Garden Stage and here is the line-up;

Garden of Elks will next be seen “up this way” at The Ironworks Easter Showcase on the 20th of April, 2014. Tickets are available via the bands or The Ironworks.