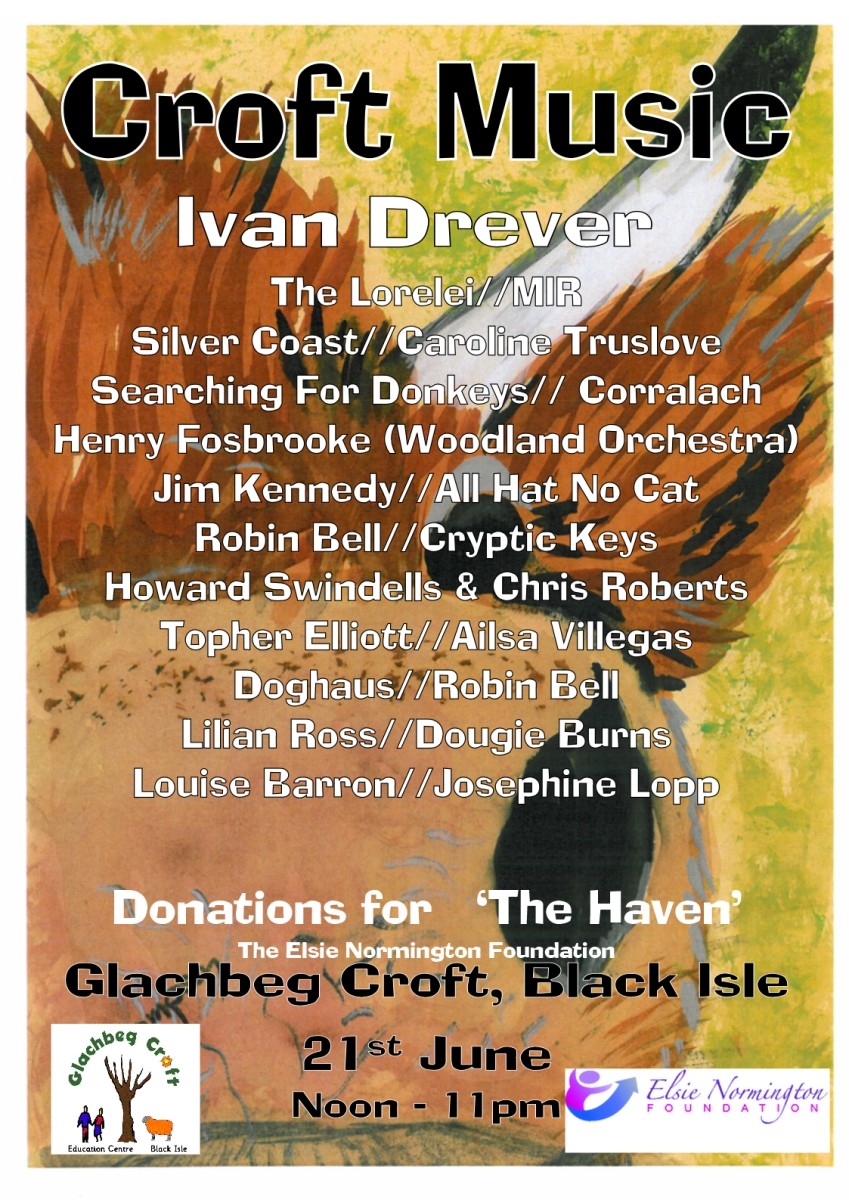 Glachbeg Croft have announced the line-up for the one day music fundraiser.

The event, first of it’s like at the venue more commonly known for it’s regular folk club, will be headlined by Ivan Drever. The Orcadian folk singer, songwriter and guitarist recently released Volume 1 of “Music From The Vaults” which includes some rare recordings and impressive collaborations including Kris Drever and Jim Hunter.

The Lorelei have always impressed when we have seen them, their blend of folk and rock have graced many many festivals and stages including Belladrum and The Wizard, they also hosted an impressive photo mashup competition on their Facebook Page :).

MIR, with the sassy and quite brilliant Miriam Campbell leading proceedings, for the retro Rock ‘N’ Rollers. Searching for Donkeys, who we predict will be playing everywhere this festival season, will no doubt bring their ‘Weathergirl’ and all their other tunes that provide the perfect soundtrack for Summer.

The well respected Caroline Truslove (we are guessing she may bring along a friend or two) will be joined on the bill by the alternative/indie Silver Coast fresh of the promotion of debut single ‘Believe’. Another local band with a good bit of momentum are the three piece Cryptic Keys who are fresh from playing a successful set at the Easter Showcase.

Other acts on the bill include the highland folk of Corralach, Dougie Burns without the Cadillacs but with his Blues/ Rock ‘N’ Roll, Henry Fosbroke (Woodland Orchestra), Robin Bell (twice apparently(look at the poster!!), Doghaus, Louise Barron, Josephine Lopp and Howard Swindells & Chris Roberts.

And of course it would not be a Black Isle party unless Adrian Telfer was invited, so All Hat No Cat will be making an appearance.

Anybody who has been up to the folk club or ventured to their stage at Belladrum will know to expect decent tunes accompanied by a brilliant welcome, we are so pleased to see this event take fruition and have no doubt that it will be a great day.

The event will be held at Glachbeg Croft, Black Isle, on the 21st of June from Noon – 11pm and will be raising funds for the Elsie Normington Foundation.