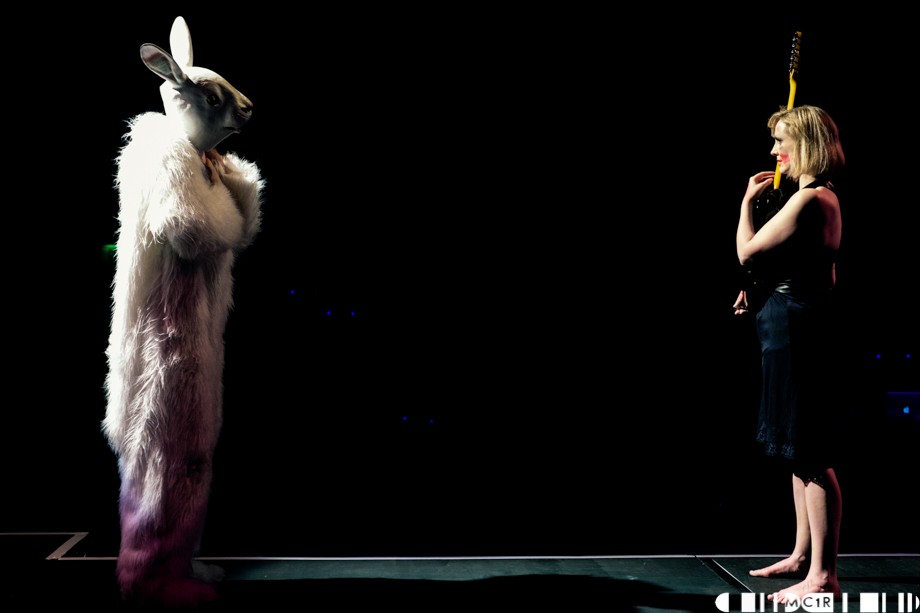 So, the back-story. Some 25 years ago Pippa Bailey created the theatre piece Biding Time, the narrative was concerned with an aspiring young actress called Thyme, essentially a commentary on misogyny and with the intention of creating an on-going conversation with other female artists about their experiences and the challenges they have faced. Pippa Bailey approached Louise Quinn with a proposal to respond to the original and the end result is this multi-media event, Biding Time (Remix). 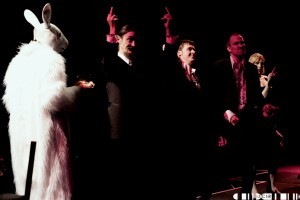 It is theatre from the start – you are given headphones on entering, the wee blue lights of which add a curious dimension to the spectacle – it was kind of like being in a Star Wars pub with some blue eyed tribe watching a show. There is a techno inspired soundtrack and on stage two members of the band are already in place: bass and drums sit perfectly still for a good 10 minutes while two screens project rapidly changing images.

First up – the sound quality was amazing, next up, it signalled the theatre that was about to unfold, essentially the band stayed ‘in character’ throughout. The headphones amplified what was an entirely immersive, participatory, provocative and evocative experience, as what might normally be considered a communal experience is rendered individual and personal.You are essentially an audience of one. This is Louise Quinn’s story, but quite quickly you start to appreciate that while there are universal motifs being played out here, you are in dialogue with aspects of her experience that resonate strongly with your own.

Roddy: for my part, I have heard myself make some of the puerile offensive remarks that the band had been subjected to during their time. I blushed. It also brought back strong memories of playing in a band where the lead singer packed it in because a review in the local press referred to her as ‘just a piece of tinsel on the end of a microphone’. Recently I have been reflecting on the whole punk thing in a rather rosy nostalgic way – I made some friends for life and had some truly great times, but the reality was that it was just as often nasty, vicious and tribal: horizontal violence was rife.

Niamh: as a young female submersed in the technology rich era that I have been brought up in, Biding Time (Remix) really appealed me to me in so many aspects. Obviously music is something of a major influence in my life but it does come and go in the day-to-day, sometimes with no thought at all and sometimes only with a quick negative judgement cast, before tuning into one of the million other options out there. It made me think, how bizarre that something I barely consider, might just mean the entire world to somebody else.

The performance had a pungent message about the role of women not only in society but particularly in the creative industries. At one point in the story, the female protagonist is encouraged by a character, who I would say represents the modern music industry, to sing what can be seen as a sexually suggestive song in order to increase the band’s popularity.

The thing that I found humorous but also horrifying is that it could quite easily be the lyrics sung by most of the female performers worshipped in today’s popular culture, some for being the beacons of ‘girl power’. As a young woman, it really does raise questions about projecting what it means to be a strong, successful female and what it means to be perceived as one by the public.

The screens don’t just project images, characters come and go in dialogue with the audience and performers developing the story and of course adding another dimension to the performance. Among other recurring characters on screen are Louise’s mum while Drag King, Diane Torr, as A&R man Mr Big is a touch of genius. And then there is that rabbit.

Now it is possible to overthink this, rabbits are a recurring motif, Frank the Bunny, Harvey and of course Alice in Wonderland and that rabbit hole (lets leave Rodger and Bugs out of this for now). But, rabbits are either all fur or all teeth and the rabbit on stage manages to represent this particularly well.

It is multi-layered, a unique character in itself; it carries Louise onto the stage; it represents an aspect of her personality and experiences, and, it is a device that moves the plot along beautifully on the night. As a feature/character, it was utterly engaging, perhaps no more so than when channeling Louise’s mother, or even more acutely, when frying lambs heart on stage. True.

So, a multi-media performance chronicling the real life experiences of Louise Quinn and highlighting the manipulation, depersonalisation and commodification of the individual. In the course of which the protagonist is alienated from the band and her sense of self and subject to competing life and peer pressures – settle down and have a family versus go for it. There have been enough males telling their own very similar stories, the challenge is for an honest appraisal of those features that are in a sense common in the ‘industry’ while admitting that for females, it is has, in addition, more than a few unpleasant layers.

It’s not new, have a read at Helen Reddington’s excellent book, ‘The Lost Women of Rock Music’, and quite probably Viv Albertine’s new book (Clothes Clothes, Clothes, Music, Music, Music, Boys, Boys, Boys) won’t pull any punches on this theme either. It seems the contemporary challenge is to stop turning a blind eye to it all and to become aware of our own behaviours and attitudes that perpetuate this deeply unpleasant aspect of culture.

So, the show, does it all work? From an aesthetic perspective, it is spectacularly good. Aesthetics aside, this kind of ‘ethnography of the self’ performance rests not just on whether you connect with it on any level, but in whether you trust it and whether it feels authentic – and on both counts, absolutely.

Finally, and of course, we have music from a Band Called Quinn. Lyrically, it offers astute commentary and as you might expect we have a pop/opera crossover feel at times. Essentially the compositions add enormously to the emotional content of the show and musically, good enough to purchase the CD on the way out.