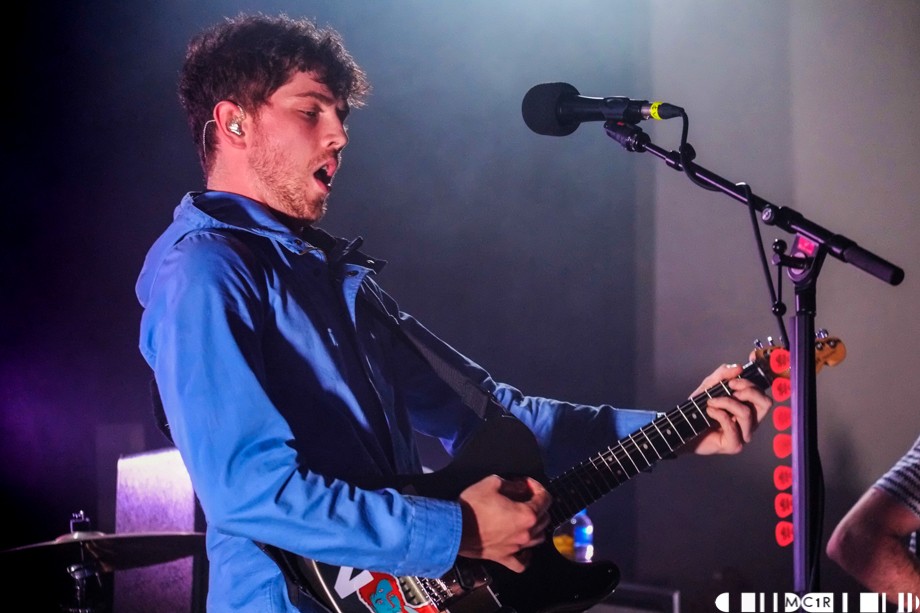 Twin Atlantic with support from Michael Cassidy at Strathpeffer Pavilion on 19/5 2014: a review.

Whether a long term fan of Twin Atlantic or a new member of the family; two things can be agreed upon about their performance at Strathpeffer Pavillion on the 19th May:

1) It rocked.
2) Without trying to be gross – it was the hottest, sweatiest gig of all time.

The evening begun with support from Michael Cassidy, an alternative folk artist hailing from Paisley. Hints of his Paisley twang shine through in his easy going banter with the crowd and in his choice to ‘sing in the vernacular”, no mid-atlantic tosh here.

It has to be said that the excited atmosphere of the crowd, who were giddy with anticipation of Twin Atlantic’s appearance, did not provide the best conditions for truly appreciating this talented singer/songwriter. The Pavillion (what a great venue!) was bustling as people gathered, met with friends and travelled back and forth to the bar for drinks (except those who were determined to keep their spot at the barriers). Although he was warmly applauded, it was a struggle to get the full attention of the rapidly growing crowd.

Cassidy played the majority of the tracks from his successful EP ‘Michael Cassidy’. I can imagine fans of artists such as Colin Macleod would particularly enjoy Michael’s charming voice and stage presence.

Expressing his gratitude to Twin Atlantic, who he has been supporting for all four Highland tour dates, Michael Cassidy will be playing in The Phoenix Bar as part of the goNORTH festival on Wednesday 4th of June. Go see him, well worth catching, and rumour has it the last time he played Inverness it was a pretty awesome gig.

it was incredibly hot and sweaty in the Pavillion

To the main event and alt-rock band Twin Atlantic took to the stage – although not before the Strathpeffer crowd proved themselves to be truly ecstatic in a bouncy sing-a-long to Bohemian Rhapsody. From the off it was clear this was going to be a 110% all-in performance. 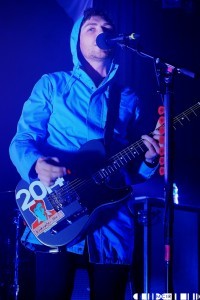 The set opened with Yes I Was Drunk from their 2011 album Free and consisted of songs spanning across all of the band’s albums. To the delight of the crowd we were treated to several from their new album Great Divide

(due to be released on August 18th) and the new single Heart and Soul – along with everything else – went down a storm with the Strathpeffer crowd.

As front man Sam McTrusty said himself, it was incredibly hot and sweaty in the Pavillion featuring full-on head banging, jumping, moshing and stage-led arm waving. Drummer Gus Munro, who normally plays with rock band Sucioperro, accompanied Twin Atlantic on this tour. You have to be impressed; with Craig Kneale unable to participate in this tour for personal reasons, Munro learned 17 songs in as many days.

After seven magnificent years of huge appreciation from Highland fans, you would think that the lads would be used to the huge response they get – but it was clear that they were still incredibly grateful and taken aback by the reaction of the crowd, especially as the entire venue sung Crash Land nearly in its entirety without needing help from Sam.

They played a three song encore before disappearing off stage to roaring applause. Over the years a great relationship has formed between Twin Atlantic and their Highland fans. They truly appreciate the tremendous support they have found here from day one and even after increasing success and public acclaim, they still take the time to meet with fans.

There is no signs of the fans adoration for these guys waning any time soon, and hopefully that means that they will continue to come back and play for us, even in the hottest, sweatiest of conditions. Bliss.

Of course there are plenty more pictures of Twin Atlantic and Michael Cassidy.