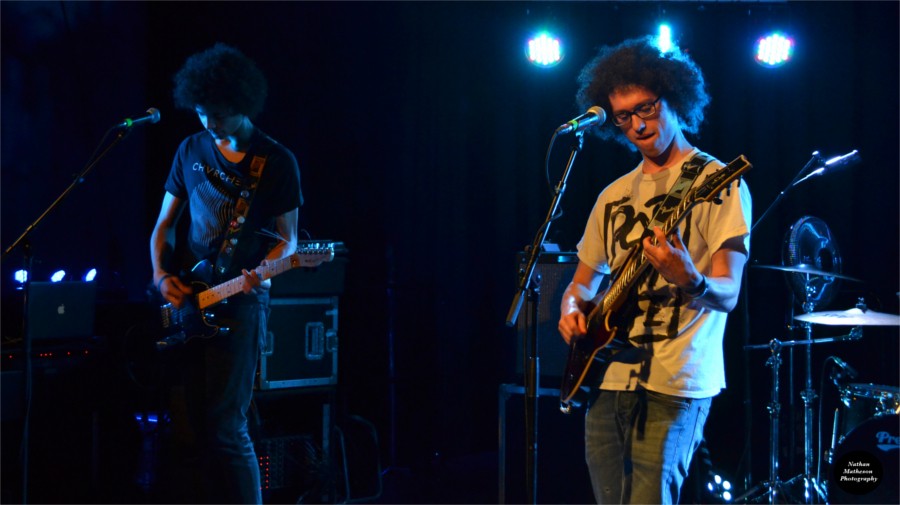 Saturday night saw the North Highland College UHI put on showcase of four acts mixing not only present students but students of the past and launch their students CD;  a CD which was also recorded and mixed by the HNC Sound Production 2013/14 students. With admission priced at either £5 with a CD or £3 without, it was a bargain whatever way you looked at it.

The opening act was The Kitty Black Band who were kicking it off ‘with a bit of rock ‘n’ roll’. Lead singer, and current sound production student, Kim has a big voice and is the focal point to their 70s and 80s influenced rock set. With guitarist Paul Thompson only recently joining the band I’m sure we can expect to hear some big guitar solos in future. New single Lights brought their set to an end, and their experience showed the kids a thing or two about playing.

Next up were a group consisting of first year NC Music Performance students going under the name of Autumn Sun. For a group that did not know each other a year ago they have gelled remarkably well. Russell Moffat on bass and John Aitken gave the band a solid base from which to deliver. Initially their music had a real melodic Coldplay feel to it with Ben Lightley adding rap lines which did not feel out of place. With Coldplay comparison made, they duly play a cover of ‘Fix You’ where, in particular, the vocals of Neil Cannon and Stephanie Hirst combine to great effect.

A reworking of Tracy Chapman’s Fast Car is then provided with Neil covering the song with breaks for Ben to give it an Eminem makeover alongside. I’d seen them do this at Glachbeg earlier this week and it had the same positive effect with the audience tonight as it did then. The final focus fell on Neil who sought a bit of audience participation as he led their set to a conclusion.

Just before Silver Coast sat down to play their acoustic set, an impromptu announcement was made of the result of a poll of students as to who was their tutor of the year. Robbie Dunsmore, in his first year in the role, took the award and was a little surprised and lost for words in accepting their congratulations.

Silver Coast may spend a lot of their time supporting high profile acts in full band mode, but tonight it was the turn of a more intimate set up. They are, however, equally comfortable in this arena. Take ‘The Fight’ for example. It translates well into an acoustic setting and still allows Aaron’s vocal to grab the attention. There is a lot of belief within this band at the moment and it was fitting that ‘Believe’ rounded off their turn.

If Silver Coast were there to mellow us out, then Spoke Too Soon had the job of shaking us up. We certainly wouldn’t be found sleeping as they rattled out ‘Insomnia’! Spoke Too Soon touch upon areas of rock, punk, metal and wrap it up in a tightly delivered parcel with a stars and stripes ribbon. Instead of finishing on a new single they went with their ‘hit’ single, ‘Sideways On A Bus’. A fine way to round off an evening.

Throughout the night thanks were given by each of the bands to both tutors, Peter Noble and Robbie Dunsmore, and also to sound and lighting provided primarily by Gareth Ince and Calum Martin.