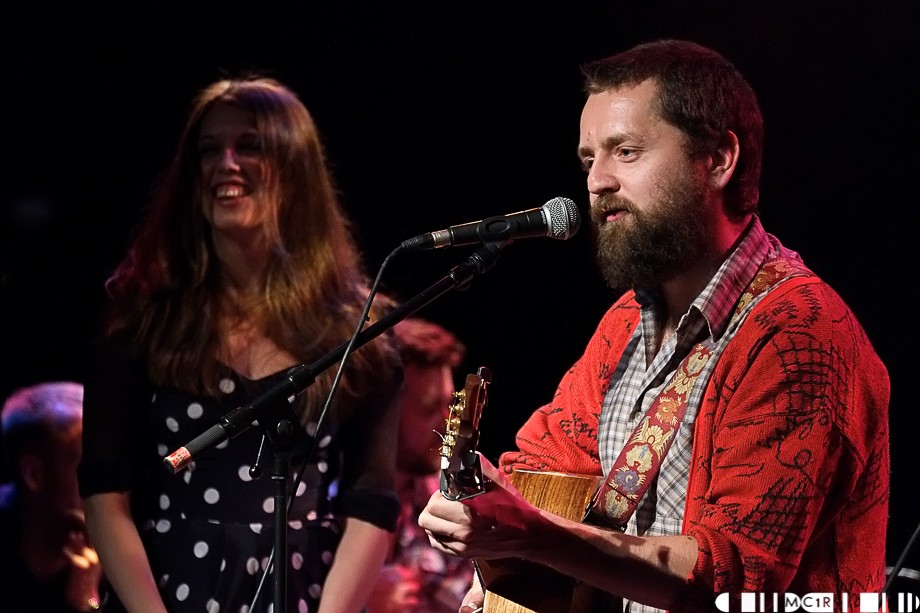 Northern Roots Festival, One Touch Theatre at Eden Court on Friday 30th  May: a review. 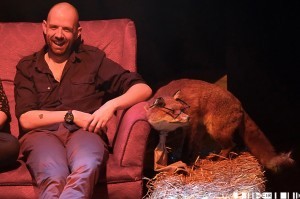 The Northern Roots Festival kicked off on Friday night with some of the finest talent from the world of traditional and folk music. In an homage to the festivals own roots at Bogbain Farm, The OneTouch Theatre stage was transformed into a cosy bar set up, creating the impression that you were attending a wee session in a local pub.

There was an onstage bar for the musicians and some quality taxidermy on display, all adding to the character of the set-up. Whilst each act performed, the rest of the artists were present on the stage, cheering on from the couches or sitting at the bar. Bruce Macgregor who organises the festival was also on stage, conducting Northern Roots Radio interviews with each band or artist individually, a really nice aspect to the whole evening that the audience really bought into – a great idea and a success.

First to own the stage were The Dirty Beggars. A five piece Americana/Bluegrass band hailing originally from Peebles; there is a lot of talent here. The band comprises of guitar, banjo, fiddle, mandolin, double bass and occasionally harmonica, along with lead vocals from Kieran Begbie. Such an adept group can scarcely stay quiet for long, literally and figuratively.

Their 2013 EP has had a very good reception and the boys have proved popular not only here, but overseas. The lyrical content of tracks such as ‘Unforgiven’ and ‘Bury the Past’ make the Beggars add to the authentic sound but the instrumental composition and the harmonious chorus’ are lively and fun – audience participation guaranteed. The Dirty Beggars ended their session with a sing-song cover of a classic, The Weight, originally performed by The Band.

Next up was Blue Rose Code fronted by Edinburgh-born Ross Wilson. Ross himself described The Blue Rose Code as ‘As Scottish as haggis and heart disease’ and this is true but their influences are clearly broad with hints of Americana and Jazz and slightly alternative folk. Ross says that theirs is a love hate relationship between him and the Folk circuit; he loves them and they hate him. For the very traditional, I can see that his take on things might seem a bit avant garde but to me, Blue Rose Code are a breath of fresh air.

Their time on stage had a very relaxed, conversational feel, they very casually went from song to song, all of which amplified the beauty in the music. The roots of their music are most definitely in Scotland; drawing heavily on Scottish landscape, nature and history in an appreciative way. For their last song they were joined on stage by just about everyone, including Northern Roots Radio host Bruce Macgregor on the fiddle.

One of the great things about an event such as Northern Roots is having the opportunity to see musicians appreciating and influencing the music of their peers in a very friendly way. Collaboration and mutual appreciation was writ large throughout.

Will Pound and Emma Sweeney teamed up to take us into the second half of the evening. I’m going to get my gushing admiration out of the way early here; I was utterly blown away by Will Pound, and I don’t think I would be exaggerating to say that every other member of the audience and the other musicians were too – seriously, three standing ovations during the set.

Following open heart surgery at a very young age; Will was given a Harmonica to help with breathing exercises, but he never put the harmonica down and now he is one of the top harmonica players in the world. If you look at a harmonica, and then look at it again, closely I would never believe that such a sound could be created with it. Emma Sweeney’s Irish-trad fiddling perfectly accompanied Will Pound.

She also played us some of her own pieces such as the ‘Flying Statue’ – high in folk credential being inspired by a very amusing backstory about a flying Virgin Mary. This pair became a hard act to follow but folk singer of the year 2014 Bella Hardy did a great job, joined on stage by Anna Massie on guitar and Angus Lyon on piano and accordion.

Bella is a talented singer and fiddler, with a natural ability for story telling. Her song ‘Herring Girl’ which she performed for us won the BBC 2 Folk Awards for Best Original Song Award in 2012.

It tells the story of a Herring Girl; whose occupation was to gut the Herrings as the fishermen came ashore with them. It was captivating. Bella is able to sing her stories and play the fiddle simultaneously which is very impressive; it’s sort of the musical equivalent of patting your head and rubbing your tummy.

Hardy successfully brings ancient Scottish history and folklore to a modern foreground without it feeling foosty or outdated. Ross Wilson joined Bella for several songs, they have struck up a musical friendship after touring together earlier this year.

For the encore, the entire roll call came to the front of the stage for a busy cover of John Martyn’s I Don’t Want to Know. It was an energetic end to a night which showcased some of the best talent from the folk scene at the moment and an evening the audience didn’t want to end.

Please have a look at our other coverage and photographs of the Norther Roots Festival 2014.