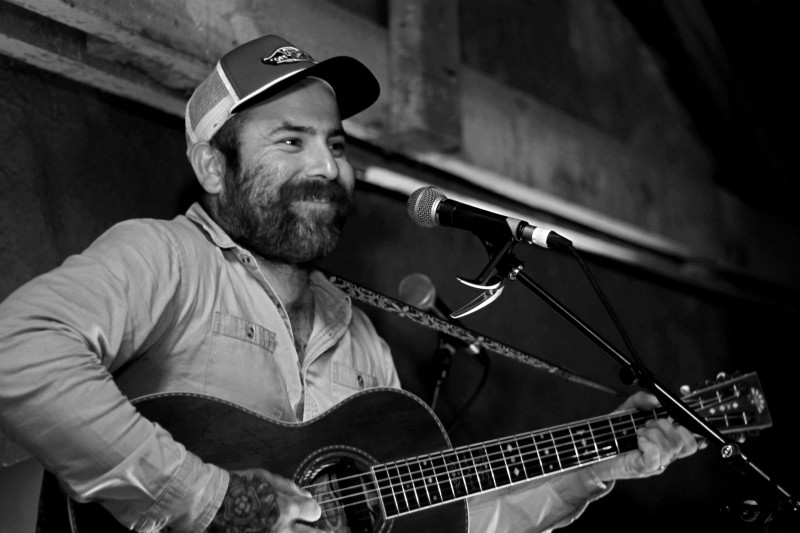 Compared to other events at the Black Isle Brewery, and by that I mean Jocktoberfest, Saturday was always going to have that more laid back feel to it with a lunchtime kick-off and a sober 9pm finish.

It wasn’t just about music and the ubiquitous beer today but also cheese. No, it wasn’t an afternoon of 80s hits but the matching of beer and Connage Dairy cheeses.

Popping along mid-afternoon the parking amongst the hay bales set the rural scene and once in the familiar setting at the barns behind the brewery the layout was self-explanatory. To the right the bar, in the centre the cheese and beer tastings and to the left the music stage with a clear area set to the front for those lively enough for a dance.

Behind that it was bierkeller style seating with hay stacks for seats and waney edged timber set upon beer barrels for tables. A similar set up was in place over the yard in the open barn.

At £5 a head it was very much a drop in and enjoy as you please day. Thankfully I dropped in just as Esperi was about to take to the stage; a stage raised above the barn and slightly obscured by the timber balustrades. This was a little unfortunate as a large part of what Esperi, or Chris James Marr as he is also known as, does is visual.

The start of the set was a more traditional acoustic affair but as it progressed the unassuming Mr Marr glided between instruments with effortless ease creating sublime songs from instruments from both the adult and child’s worlds.

The culmination was sublime. The intensity grew hitting a new level when he mixed bow with electric guitar looping us towards a triumphant end as he drummed his way to a conclusion. Half an hour just isn’t enough but with a gig in the evening the softly spoken Mr Marr bade us farewell.

With half hour gaps between acts it gave way to a leisurely afternoon with no rushing between stages. With a pint of Goldeneye in hand the next act up was young singer songwriter, Dougie Scott.

There is a youthful freshness to Dougie that sat well with the afternoon and his songs, although generally short, caught the afternoon’s audience’s attention.

There is a breathy element to Dougie’s delivery which mixes well with the setting and also the day’s relaxed atmosphere. He’s a young lad who enjoys, not just a song, but all that goes on at festivals too by the sound of it.

Dr Wook, that is Kris of the Whiskys, was my final act of the afternoon. Dr Wook sits well in these rustic surroundings as he slips comfortably between the bayou and the blues. Earthy with a bit of grit Kris has really grasped this solo venture away from his beloved Whiskys. Mixing beer and cheese may be alien to some, but you could say the same when Dr Wook covers a Kylie song. Unexpected combinations really do work.

The spend an afternoon on a farm with beer and music works well. It brought out a different audience to what many of the acts would have been used to playing to. It also gave the opportunity to try a few new beers and cheeses too. Not a bad way to while away a few hours in the countryside.

Information on tickets and line-up for Jocktoberfest 2014.