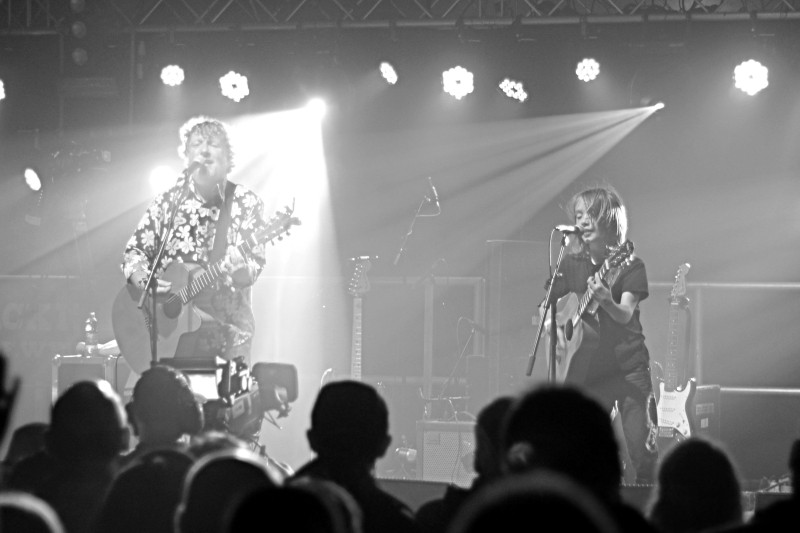 Review of Glenn Tilbrook on the Grassroots stage at Belladrum, 8th of August, 2014.

There was something about Glenn Tilbrook when he walked on stage that I just knew that this was a set worth hanging around for. That ‘something’ was a smile as wide as the stage itself. His effervescence was contagious as he hooked and drew everyone in with opener ‘Best of Times’.

It was only fitting that he drew on the Squeeze back catalogue as his infectiousness gave rousing applause for each song almost to the point that he wanted the audience to stop. ‘Up The Junction’ was even extended to accompany an impromptu sing-a-long. Songs from recent album ‘Happy Ending’ were equally well received as were the stories behind them such as ‘Persephone’.

Glenn, showing his age, mentioned that he never really liked those father and son acts that you saw on Opportunity Knocks but then went on to introduce his son Liam to the audience. Liam then showed his prowess on his electric guitar and then joined his father to accompany him on ‘Take Me I’m Yours’.

He also made later return which brought further rapturous applause. Glenn described his son as ‘keen’ which is a bit of an understatement in describing a young lad who has the ability of a seasoned musician. Oh just one other thing, Liam is eleven!

Over the set Glenn switched between electric and acoustic guitars as a wave of nostalgia filled the tent as he went between his solo material and his Squeeze collection. Whether it was ‘Slap and Tickle’, ‘Is That Love?’, ‘Tempted’ or one of the many others, everyone heard a favourite tonight. Or at least it sounded like it as Glenn left the stage.

“We are not Grandmaster Flash”