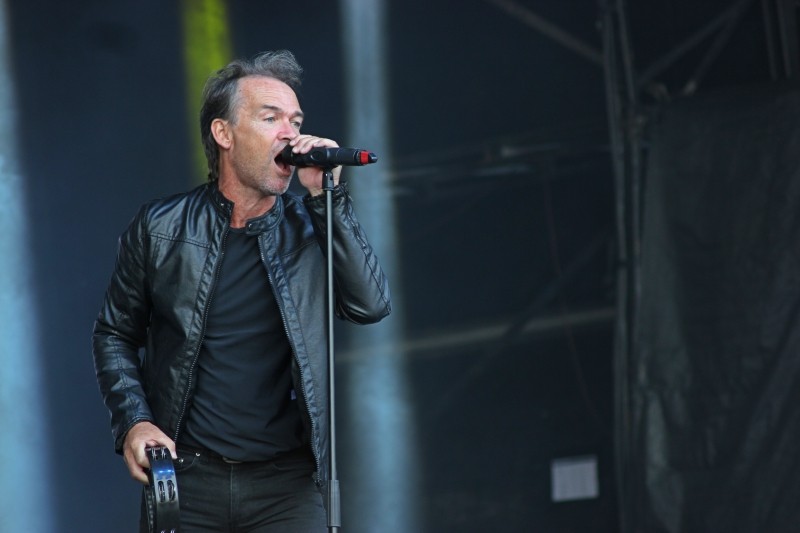 Review of Ex Simple Minds on the Garden stage at Belladrum, 9th of August, 2014.

Ex Simple Minds or to give them their snappy title, XSM, are a sort of Simple Minds tribute band. I say sort of as original drummer Brian McGee is a mainstay of the band so that makes it a little less of a tribute.

In simple terms they are a band that play the music of Simple Minds that have the original drummer. That simple explanation was enough for the fans that gathered down at the front for their performance.

Brian’s brother Owen Paul is the frontman. although he is no Jim Kerr, and he doesn’t pretend to be, he has enough charisma to carry off the front man role.

If you are wondering where you’ve heard his name before, and I’m aiming this at the fortysomethings, you should cast your mind back to the 1986 and his solo hit “My Favourite Waste of Time’.

What they do, they do well. They take the Simple Minds collection and play it through all eras of the band.

Opener ‘Waterfront’ provoked a surge of dad dancing which lasted unabated all the way through to finisher ‘Sanctify Yourself’. In between they touched upon the early years of ‘Love Song’, through the stadium years of ‘Alive and Kicking’ and were even able to throw in an acoustic version of ‘Speed Your Love To Me’.

For many it was Ibrox and 1986 all over again, in fact Owen Paul could have sung his aforementioned hit and they would have been none the wiser, but that’s the appeal of a few beers and memorable tunes.

XSM are one of those bands that suit the main stage at Belladrum. The Dangleberries do it, Scooty and the Skyhooks do it; they are bands that play the familiar and gee a party along. That’s what they wanted, that’s what they got.