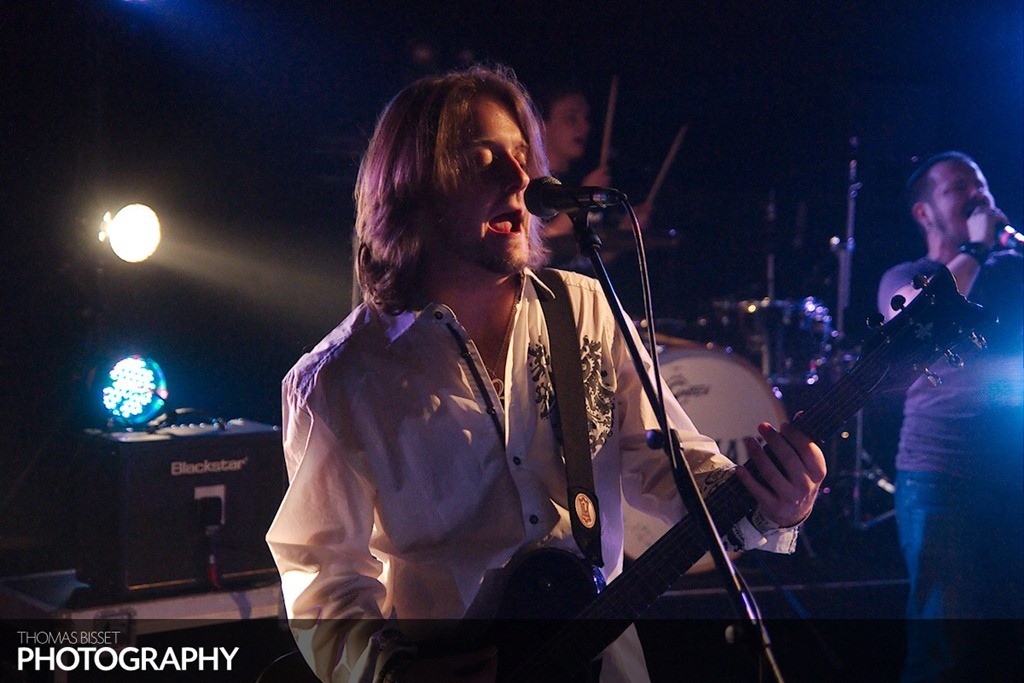 An interview with Ross McEwen of ROADWAY

Following recent personnel changes and a return to recording and live gigs we caught up with Ross McEwen (RM) of ROADWAY for a chat.

The biggest, although not the only, recent change is the addition of new lead singer Ross Holland (RH) of Devil’s Queen; RM acknowledges that he has been keen to work with Ross for some time. The two went to school together although RM didn’t know he could sing until Devil’s Queen came on the scene.

When ROADWAY’s previous singer (Dougie Greig) left, it was an obvious step to invite RH to the band although this was not without it’s challenges “(RH) has a different voice.. a much lower range, a much stronger voice and more bluesy”.

His recent Easter Showcase being one gig that particularly stood out for RM “I think he did amazingly well, a big stage and a reasonably large crowd for that time of the night”.

“He was a “fan” of ours already, he knows what we want to achieve and he is easy to communicate with and he has some great ideas ” RM handily points out.. “There’s three Ross’s in the band”, not confusing at all then :).

In announcing the change of lead singers on their Facebook page they clearly identified that RH’s selection will allow a different dynamic and approach for the band;

“Dougie Greig is very much a unique individual with regards to his composing and vocal talent, so rather than wearing ourselves out trying to find a copycat we’ve enlisted the services of a man with a very different voice to Dougie’s, a more classic rock/southern rock voice that represents some of the direction we will be going down with the new record.”

New members to the band also include Finlay Cable on bass and Mark Hunter on keys (although he had previously played with the band). “The band have not met each other yet” RM candidly adds (they have now -Ed, see below), due to the fact that the band members are split between Glasgow and Inverness. “It worked ok last time so there is no reason why it won’t this time” RM notes.

Despite the personnel changes there is no doubt who is incharge, with Ross proudly describing the pride he takes in the organisation of the bands right down to hotel bookings and bus scheduling “I’m confident in my ability to do these things”.

Subsequently they have started recording 3 new tracks whilst also revisiting previous recordings and plans to get some new videos too. RM reflects that previous recordings “have the best sounding CDs in terms of sonic quality” with RM relating this to the the investment both in time and money that has been put into them.

Looking back at the most recent release he describes it as much heavier and much more progressive “I found it too far away from what we did before”. The ideal for RM? simple; “a big chorus, a song you can whistle to, that’s it”. This time round there is a return to classic rock, RM describing one track as “Johnny Cash stepped into AC/DC for a day”.

As a band ROADWAY have been together for four years despite members changing, RM is clear of the band’s status “it’s a very part time band” . The advantages of this for RM are clear “we don’t play eight times a month as you end up broke and angry with each other and you won’t achieve much”. RM adds that despite this approach the appetite for the band is still apparent from the audience “we’re still getting asked when we are play, it’s very humbling”.

Indeed the first gig with the new ROADWAY, albeit it in it’s abridged and acoustic form will be at Mad Hatters with Mike Tramp.“Playing Inverness (including festivals) is important to me “ but RM is clearly aware of the risks of overplaying the area or “doing it to death” , although he notes that ROADWAY in their existence have only played the area two or three times.The opportunity to return to Belladrum where they played in 2012 at the seedlings stage, is an obvious goal for the band and RM in particular. “Belladrum has a charm.. it means something to us”.

First things first though, the full ROADWAY line-up will debut in Glasgow at Nice N’ Sleazy’s with Sonic Templars on the 19th “it will be loud and noisy the night” Ross promises.

It is hoped that the revamped full ROADWAY line-up will return to play Inverness in October, although this is to be confirmed.