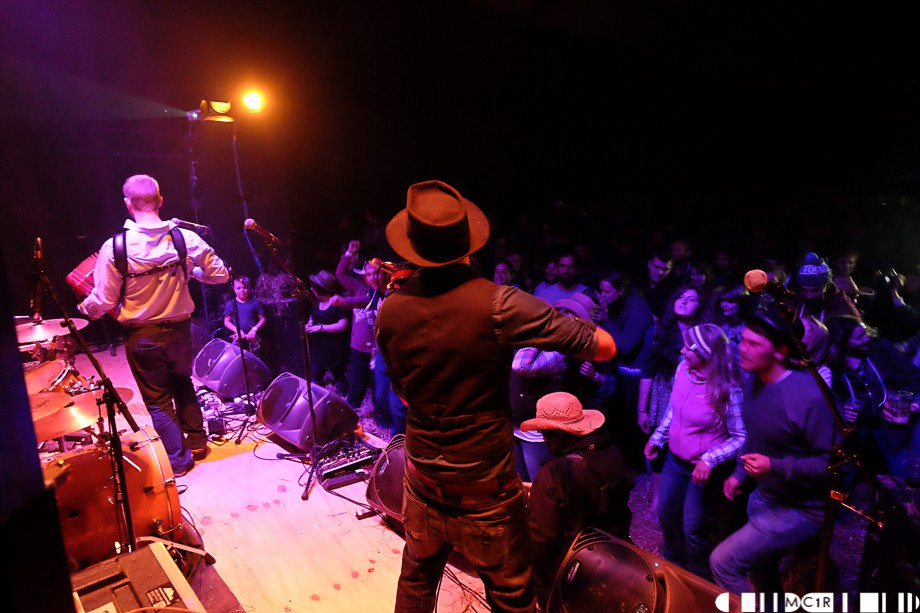 Arriving at the Black Isle Brewery, the venue for Jocktoberfest, we were greeted with a surprisingly full field of cars. Friday night is really a warm up night for the campers to get them settled in. It could well have been the quality of the acts but the majority of the festival goers had made the effort to make their way on site, that’s campers or otherwise.

There is something quite magical about the venue. As you walk towards what appears to be more akin to a makeshift field tent you are greeted, once you have had your wristband put in place, by, as one of my companions put it, ‘another world’. It really is as if all that you know is suspended and this little festival takes over. The lighting, the bunting, the split logs on fire create such an ambiance. Each bay of the steading draw in little groups while others mingle in the central area. Those keen for the music to start congregate in the Dutch barn.

First act were Lionel, although I did discover later that Kris Douglas of The Whiskys played an impromptu set as the number of early site entrants swelled. Lionel arrived with a burgeoning reputation which was certainly confirmed by their glowing introduction by compere, Netsounds’ Jamie Macdonald.

They may have been one man down as keyboard player Gogo McKerrow had taken leave of the band for a holiday in Ibiza. It must be the rock ‘n’ roll lifestyle as this is a band that live and breath it.

Joshua Mackenzie holds his own as a frontman. The brooding depth of his voice coupled with some hard edged dirty distorted guitar, especially on ‘Over and Over’ captivate. They really shook the barn down. A very impressive opening act who had set the bar high for others to follow.

Next up were The Whiskys. This is the first time that I’d heard them since their re-emergence and boy were they tight. The early part of the slot was very measured; keeping a lid on what was to come. This was well a well constructed, bringing the audience with them, kind of set. It ramped up through ‘Live on a Wire’ and ‘Take You There’ and reached real audience acclaim with new song ‘Open Water’.

It may well have been its spaghetti western backdrop that enhanced the performance but it was roundly very well received. As the applause died down I heard a voice behind me say ‘very impressive’. I couldn’t agree more. ‘No Regrets’ has also found new roots, reggae roots, and this Kingston Jamaica start made way for a full on rip by The Whiskys. The Whiskys are back, straight up, no mixer added.

If you are going to get a crowd warmed up on a cold night, and the temperatures were dropping, bring in a ceilidh band. And what’s more, bring in one that can relate to the wild west theme. That’s what Tweed did.

Opening with some dueling fiddle and accordion in a truly Deliverance style they more than won the crowd over. From that western start they moved homewards and onwards east to inspire a little Russian dancing as they lit up and warmed the Dutch barn. They know how to take a crowd with them, and this they did with ease.

The opening acts were more than enough to whet the appetite for Saturday.

Have a look at our other Jocktoberfest 2014 features.