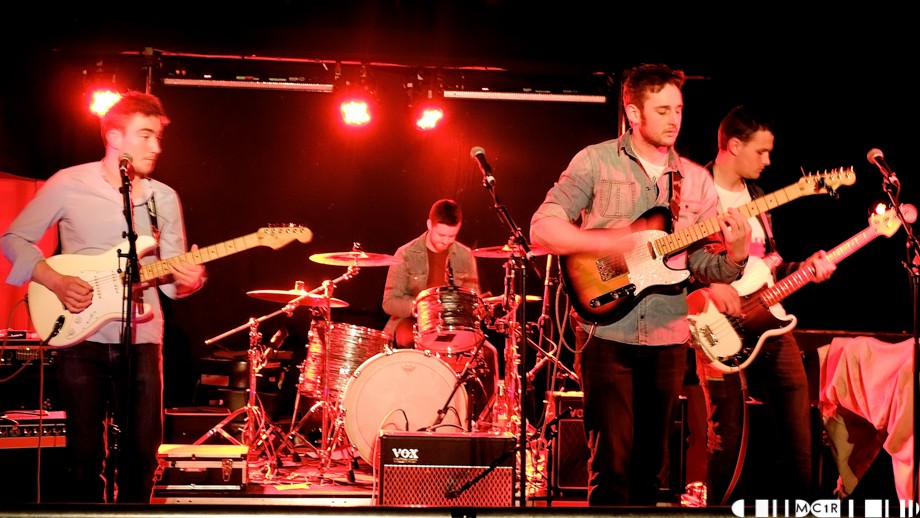 A very productive 2014 has seen the four piece progress quickly, support slots for the likes of Casual Sex have been complimented by a Belladrum slot and a recent showcase appearance that saw their sound described as “big and full and pop laden”. We catch up with the band prior to their EP launch at Hootananny.

Bite Night , for us, conjures up images of B movies from the seventies and eighties, where did the band name come from?

Well the name Bite Night came about due to a mutual love from us all for Robert Paterson. No but seriously the name came about after we had all been out drinking after a practice one and toward the end of thebeing lads we were all toy fighting, Ben Rait (guitarist) was on the wrong end of most of the violence and out of know where he has bitten the top of my finger and held on for 3/4 seconds before releasing leaving me needing 3 stitches in my finger.

Should have had him locked up but he’s too good on the guitar and far too pretty for prison.

How important is it for the band to stay true to your influences?

Well as far as staying true to our influences goes Ben Rait the lead guitarist has the entire Bass hunter and DJ Cascada catalogue in his collection of music, Kenny Lyall (drummer) is disco kid with the likes of CHIC and Cool and the gang in his.

Lisle Geddes (Bass) only listens to Huey Lewis & the news and I am heavily influenced by the likes of the Carpenters and Spandau Ballet. We would like to think that all of the above shine through in our music.

From Battle of the Bands to Belladrum, you’ve had quite a year so far, what have been your highlights?

Yeah a lot has happened so far this year it was obviously great to get asked to play Belladrum. We all really enjoyed the summer showcase at the ironworks as well recently. But for us all, I’d say a gig we played up in Ullapool in june in the Frigate was the best so far. Its a fairly small place but with a band of friends locals and tourists the place just went mental. That’s what its all about at the end of the day.

Can you tell us about the process in creating your first EP?

The process of making the EP was simple. A friend of our Richard Bell has a recording studio on the Black Isle Kildoran studios and we just set about it. To their credit Kenny and Lisle recorded the drums and bass on their own first. Then myself and little Ben came in and did the guitar parts and vocals.

The recording process has definitely helped us in finding backing for the songs it was great to be able to just sing along and pick out bits that suited.

How difficult was it to pick the tracks for the release and which ones are you particularly proud of?

To be honest we could release 4 eps or even just an album of songs that we all really love so it was a tough decision. We basically all just picked a track we liked and stuck it on. As I’m doing the interview id have to say ‘Beers to Tears’ is a song that i personally am very proud of but they are all great haha.

When we spoke earlier in the summer you mentioned the aim of the band as “having a bloody good time doing something that we all love but also because we put together a set of tunes that we all really enjoy playing/listening to”. Does the Ep and increased gigs outside of Inverness mark a change in the ethos of the band?

No not at all trips up north to Durness or down south to Glasgow or wherever we play are all part of the fun. we have played at a lot of cool wee venues and drunk a lot of free beer so id say we are still having ‘a bloody good time’.

The EP is something that people constantly ask us for at gigs so we thought why not, its also been a lot of fun recording and making up the art work etc.

Tell us something that we should know, but don’t, about the band?

We officially invented the dance move called ‘The Dodgem’.

What’s next for Bite Night?

T in the park and Jools Holland or failing that goNORTH festival next year if they’ll have us.

Bite Night are supported by The Ragazzi and Fraser Gallacher at their album launch at Hootananny, 12th of September from 10 pm