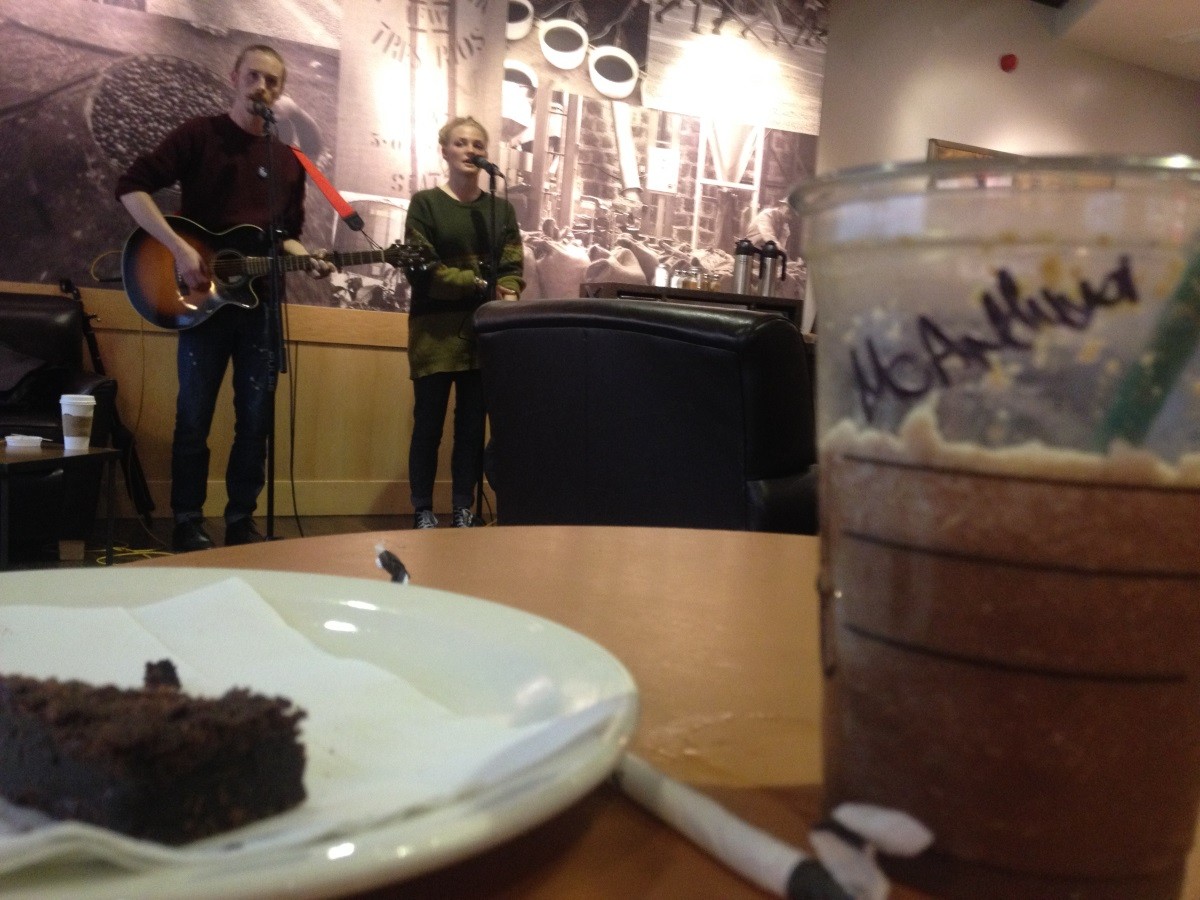 Red Ronson at Starbuck on the 18th of September. A review.

The evening of Thursday 18th of September saw the second acoustic night organised by Fried Gold Music and Inverness Gigs, at Starbucks Eastgate.   After really enjoying Megan Blyth kick things off 2 weeks before, I returned with some pals for the perfect after-work antidote to keep us going until the pending weekend and that wasn’t just getting my frappuccino fix.

This week we were blessed with the fabulous Red Ronson and I was intrigued at how much Red or Ronson we would get or if some of Andrew’s alter ego Claire’s Brother would be present.  Much to my delight and love of the female voice Andrew Barnett was joined by fellow band member Iona MacInnes, who had quite literally just got off the train from Edinburgh giving them only 5 minute rehearsal/warm-up before they stood before us.  You wouldn’t have known it when they sang together, their contrasting vocals intertwining like they hadn’t been 150 miles apart just 3 and a half hours ago.

Love songs not just about being so deep in love where you can’t believe how close you can be with someone or how you dote on them like a ‘Princess’  (Prince in my case) – but also a contrasting tale striking a cord with me about being that ‘Fall Back‘, we have all had one or more unfortunately been one.

I kicked myself I didn’t take advantage of ‘ladies choice’ suggestion and get up for a wee at waltz to the delightful track Carousel, a twirl on the coffee shop floor would have made me blush and taken me right our my comfort zone (which is something I am working on), but most importantly it would have saved me from the chest and brain freeze which shortly followed.  Drink frozen drinks responsibly!

I learnt something new today about the inspiration of the song ‘Salvador Dali’ which the band released last year, the inspiration was a moustache shaped car air freshener and of course a “nutter” ex girlfriend, a lyrically winning combination to make a great track and as always an award winning moustache from Andrew.

Votes have been counted and the results now in, but let’s not forget that this Thursday was an epic day for all and I was more than a little distracted at work that afternoon.   However, surrounded by captivated, friendly faces made up of those there for the gig, and those just getting a bonus beyond chocolate sprinkles on their cappuccino it was the perfect place to escape from the madness outside and in.

Andrew felt it too, letting us all know at the end how this was the most fun he had had at a gig in ages, and this was saying something as he played last week to hundreds at the Ironworks! Sometimes less is more, something we all need to remember more often.

You will find music along with cold and hot beverages, at Starbucks Eastgate Shopping Centre every second Thursday at 6pm – up next Hannah Finlayson on Thursday 2nd of October. My advice?  Get there early and stay late so you can blether to your mates too, what could be a better!

For future notifications make sure you check out the succinctly titled That Fried Gold Music and Inverness Gigs Thing page.