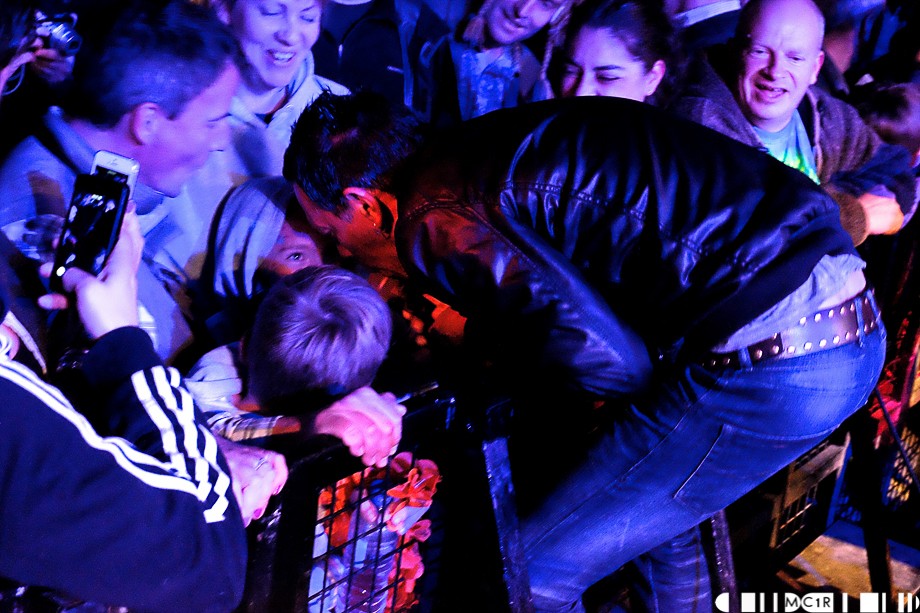 From past experience, it can be quite difficult for the first act of the day to draw a big crowd on day 2 of Loopallu festival but Vigo Thieves big indie synth sound drew people to the big blue tent.

These boys have developed quite a following in their hometown of Glasgow and I can understand the appeal; big, energetic sing-along sounds makes for a great gig atmosphere.

I wouldn’t dispute that Vigo Thieves have got a great, catchy appeal but they are trying to find space in a very crowded market.

With so many indie bands aiming for that same huge sound, it’ll be difficult to remain fresh and distinguishable but I think the Thieves are definitely on their way up, rather than on their way out. Vigo Thieves are currently on tour around Scotland, with Loopallu being the sixth date out of ten.

Now, who needs a band when you’ve got Kim Churchill? Hailing from Australia, Kim Churchill was second to the stage on Saturday and was one of those acts that made you question what you’re seeing. In this case ‘Am I really watching this one man make all that sound?’

Let me just paint the picture; Kim was playing a harmonica, an acoustic guitar, a drum with 3 pedals and a tambourine all at once. Not to mention, blasting out some fantastic bluesy/rock vocals when taking a breather from a harmonica.

It might seem like he’s bitten of more than he can chew there but it really worked and it was one of the biggest, pleasantly surprising sounds of the weekend. I can imagine it won’t be very long before we’re seeing a lot more of the barefoot Aussie Kim Churchill.

White. White are a band made up of some former members of a band that many knew and loved called Kassidy. This band is not Kassidy. New frontman is also known as an independent artist who goes by the name Roxy Agogo.

In no small part is Mr Roxy inspired by art rock band Roxy Music, he may as well go by the name Bryan Ferry. Former Kassidy members seem to have trimmed their beards and moved on to this new, incredibly 80’s inspired sound. It’s all very art school. Roxy Agogo is quite the exhibitionist, two songs in to the set at 2 o’clock and he’s down on his knees, dirtying his pale blue suit whilst he dramatically clutches the microphone.

At one point his performance extended to tugging on his lead guitarists beard whilst he played his guitar solo; it was all very bizarre. The drummer for new band White has previously played with band Garden of Elks and is incredible. They make a big noise and its an interesting draw on 80’s influences but their live performance did seem to leave an audience divided.

One band who the audience got behind fully was Hunter and The Bear, who drew one of the biggest crowds of the day. I instantly got a warm feeling from them and that didn’t diminish as their set went on. The band fall comfortably into the Folk Rock genre and their sound is defined by a steady, hearty beat layered with the intricacies of the mandolin and guitar with some beautiful vocal harmonies thrown in.

It’s hard not to mention Mumford & Sons when talking about such a band, but there are distinct similarities. Hunter and The Bear however have managed to create their own sound, and it has a more wholesome, earthy quality to it that is entirely pleasant.

From the sincere, hearty side of the folk genre, to the whimsical and absurd. Mark Radcliffe and the Foes are like The Singing Kettle for grown ups. and I mean that i the kindest way possible. They are colourful, fun and a bit silly. Mark Radcliffe and his four foes took to the stage in their self branded s*@te shirts -matching floral patchwork shirts-.

Loopallu was the last stop for Radcliffe and the Foes on a tour that has taken them to Iona, Mull, Skye, and Stornoway. They had the crowd in stitches at times with their repertoire of folk and drinking songs.

From the jovial to the edgy, Alabama 3 returned to the Loopallu stage. They played an Unplugged set covering A3 favourites such as Woke Up This Morning, Hello…I’m Johnny Cash and U Don’t Danse to Tekno Anymore. The personas of the band members really contribute to the atmosphere created in their performance.

Although at times, it’s a bit hard to tell how much is a persona and how much is just…real crazy. They kindly shared stories of their last visit to Loopallu which involved a fair amount of police intervention and cussing. Great fun! Their gravelly country/blues went down a treat with festival goers.

To round of the big birthday celebration were headliners Shed 7. Shed 7 reached the peak of their success in the 90’s contributing the Britpop genre that influenced many bands at the time. They opened with Getting Better which was the first track from their successful 1996 album A Maximum High.

It was clear that Shed 7 were going to provide a high energy finale from the beginning of the set, with front man Rick Witter jumping into the audience during the first song.

It was a pop tastic finale for the Best Fest in the West. Another year, another near-miss with the weather, another enjoyable lineup. Until next year, Loopallu!

Click for more <a href=”https://invernessgigs.co.uk/loopallu/”>Loopallu coverage</a> , to keep up to date with what’s happening on Inverness Gigs, press the button below;
&nbsp;
[maxbutton id=”1″]