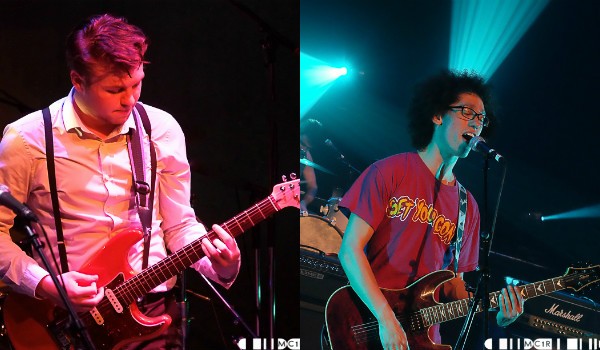 As we reach the last couple of interviews for the Winter Showcase, we turn to Lionel and Spoke to Soon to cast their eye on the year that was, the year that will be and ,of course ,their choice of festive chocolates.

Lionel – It’s impossible to choose a favourite as far as gigs this year go. Belladrum, Brew at the Bog, the Easter Showcase and goNORTH are all personal favourites for us though.

STS – There’s not as many to choose from as the last few years, but the one with Carnivores and Press To Meco at The Eagle. It was such a good line up to be on. We already knew Carnivores were gonna be sick but PTM just blew us away. I think Hunter’s watching them in Glasgow as I write this actually.

STS – Steve says The Xcerts, “cos their new album is da bomb” and I’m guessing Hunter would say Biffy Clyro since he was lucky enough to get tickets to all three of their album shows. Kieran says Press To Meco, and New Found Glory comes first to my mind.

Lionel – Havent really had the chance to go to many gigs this year other than our own. Have been impressed with fellow Inverness band Bite Night every time we’ve see them though. Casual Sex as well of course and The Outsiders put on a fairly epic show at their recent EP launch!

STS – If it has to be one, ‘Go Down In History’ by Four Year Strong seemed to be on all summer. If it can be more than one, I’ll add all of ‘Abandoned By Bears’ latest EP.

Lionel – For 2015 we just want to continue progressing at the pace we are at the moment. We haven’t yet hit a ceiling, so we would like to keep it that way. Nothing too unrealistic.

STS – For Kieran to move down the road with us! We miss him on these cold winter nights. Need to record something with Stephen as well.

STS – Christmas. New Year is always way too much of an anti-climax.

STS – Quality Street because Heroes are just small versions of things you can eat all year round. Roses trump the two of them though.

STS – What does Cliff Richard even do these days? The only place I ever see him is on calendars. And Band Aid is just a club for self-righteous popstars to pat each other on the back.

Lionel – Cliff. Even if he is convicted, that’ll only make him half as much of a sleekit goblin as Bono and Bob Geldof. Best of an absolutely rotten bunch.

Lionel – we are headlining the Ironworks Winter Showcase on Saturday the 27th and playing King Tuts on January the 16th.

STS – We’ve got some fun Christmas-y things planned for the showcase, so try to stay in the festive spirit at least a couple of days longer than you might normally!

Check out our other Winter Showcase Interviews (including We Came From the North), you can buy tickets for the showcase from the bands directly (see the above links).