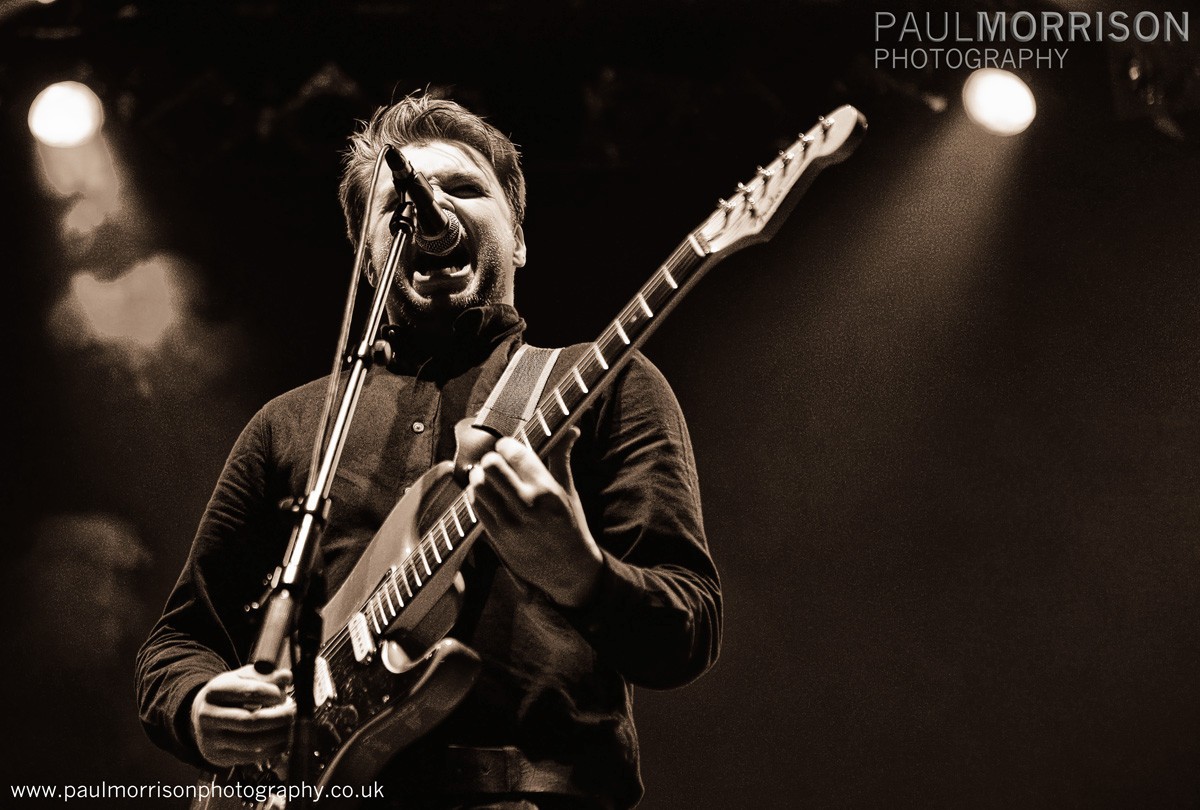 Bands at the Winter Showcase, Ironworks, Inverness on the 27th of December, 2014. A review.

Called up as a last minute replacement for the cancelled Medals, Iain McLaughlin manfully steps up to take on the job of warming the Ironworks punters up with a short acoustic set. I’ve only ever heard him play with the full band before so this acoustic set was a first for me. Stripped down to the basics, he played a mix of tracks from the debut album and the latest EP ‘FalIing Through the Dark

Even with ‘just’ an acoustic guitar to hand he still puts on a fine performance, raw and passionate, not a man to shy away from wearing his heart on his sleeve he still has the ability to pull you up short and pay attention. He was at pains to remind later me that my focus should be on the other bands tonight,claiming that he’s an old hand at this the newer bands are more deserving of my attention. I argue that he’s doing himself a disservice. This was as good as anything I’ve seen him play before and certainly merits this short paragraph.

Impressively, considering it’s that awkward period between Christmas and New Year, there was a good turnout of enthusiastic punters to give the bands the support they deserve. Ross-shire rockers Atlas are young (so, so young!) raw and inexperienced but they deliver an assured set.

It would be too easy to give them a virtual pat on the head, but that would be a) patronising and b) unfair. They might have been new to most of us in the Ironworks last night, but with a combination of drive, passion and musical flair they proved that ‘young’ needn’t mean ‘can’t put on a good show’.

They play good solid rock music, with the odd little foray into eighties AOR. You know the kind of thing, a touch of reverb here, a dab of the chorus pedal there, a smidgin of a widdly guitar solo, big singalong choruses and the opportunity to hold lighters (or smartphones!) aloft.

Extra credits should also be given for the frankly brilliant cover of Adele’s ‘Rolling in the Deep’. I have little truck with the warbling overpaid harpie and Atlas’ cover was better, louder an more impressively, lead singer Cameron Grant bloody well goes and pulls it off.

Spoke to Soon seem to flit between structured verse/chorus/verse to a riotous cacophony and the initial impressions are of a band that don’t seem too sure which skin fits best.

I’m not wholly convinced that the use of the synth added an awful lot either. The odd death metal growl further defies attempts to pigeonhole the band. Plus points are that they have cross party appeal, downside is that it all sounds a bit muddy and disjointed. But they gave us a Xmas song and the afros are rather magnificent too. (read our recent interview with the band.)

The heavy bass driven instrumentalists We Came from The North seem to be filling the void that Shutter have left. Or they would do if they hadn’t relocated from Inverness to Edinburgh!

Highland bands have a knack of matching the landscape; from moody and bleak before switching to a triumphant crescendo in the space of a few bars.. The kind of music that suits a drive through misty glens or as the accompaniment to a Scottish winter climbs video where Dave Macleod desperately scratches his way up an exposed North face or a scene where a skier plunges through snowed up Cairngorn gullies.

The difficulty instrumental acts have is being diverse enough to hold an audience’s attention. These guys manage this though, building on wave upon wave of sound and some properly colossal bass lines. The between song banter is jovial, which is slightly at odds with the music being performed on stage!

Lionel are easily one of the best local bands of this year and during 2014 they impressed audiences across the Highlands with a series of seriously good performances. What do you say that we haven’t already said this year?

They’ve matured certainly and the songs sound crisp, jagged and edgy. The tight riffs are efficient without being soulless and I’ve seen fully signed bands put on far less of an effort and pull in less of a crowd too!

Front-man Joshua Mackenzie reminds me a lot of Orange Juice era Edwyn Collins, he’s a confident and commanding presence on stage and seemed genuinely aggrieved that too few people were dancing.

A few wee technical gremlins threatened to cause problems but the band pulled through and delivered a belter of a set leaving the Ironworks crowd baying for more.

You can catch all our other Ironworks Showcase coverage here.