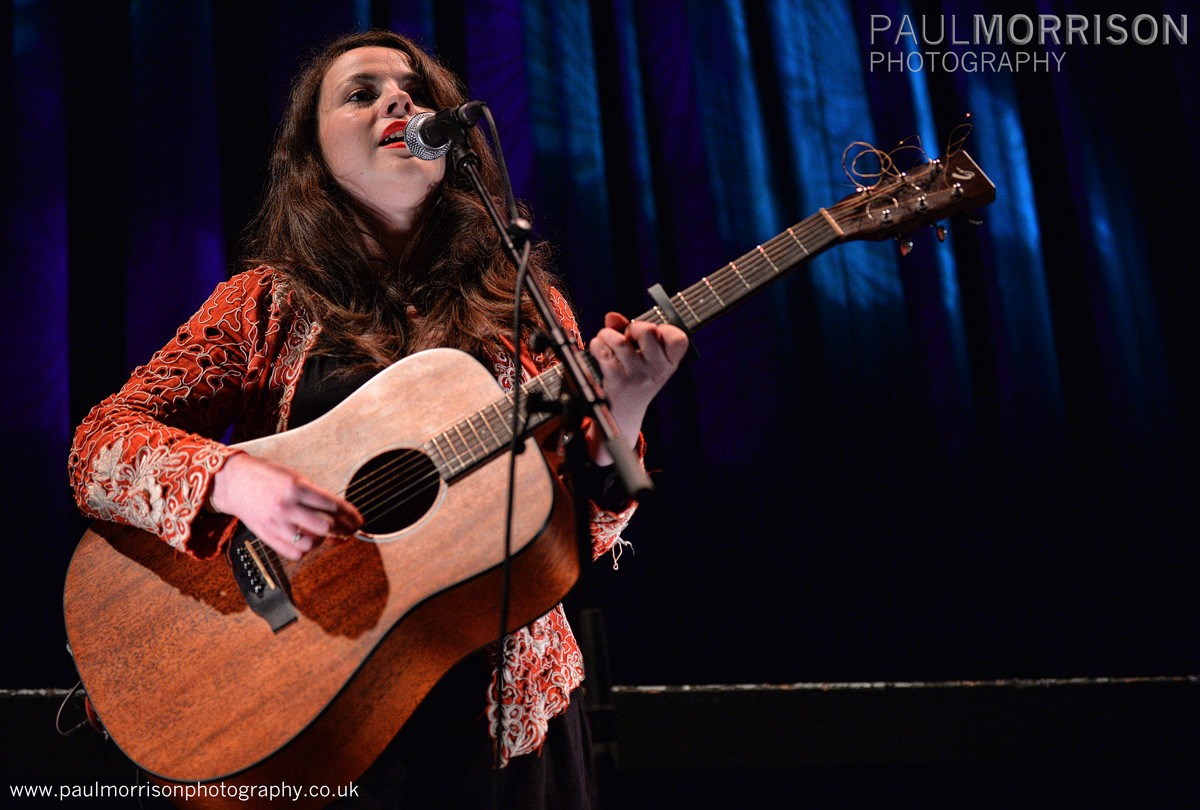 Acts at the Winter Showcase, Ironworks, Inverness on the 28th of December, 2014. A review.

The musicians took to the raised platform on the floor of the Ironworks one by one to entertain a full house- tables like a canteen, though tonight feeling more like a fancy restaurant, there were very few free seats in the room.

First up was Imogen Islay Hay; a unique experience at the Ironworks playing a Clarsach or Celtic Harp. Playing guitar and singing simultaneously is difficult enough as it is, but the harp and singing at the same time seems damn near impossible, yet Imogen managed to do both to such a high level.

I first saw Imogen back in August at Glachbeg Croft Folk Club on the Black Isle and since then she has thoroughly earned her Ironworks slot. This youngster to me has synthesised a new genre of music- Harp Pop, and I hope to see her progress further in the future. Imogen was recently involved in a project called Music + where she was mentored by Claire Campbell, AKA Abigail Grey. The two co-wrote a song “Red Apples” which really highlighted Imogen’s talents, especially with the instrumental in the middle; truly staggering to watch.

Some of her songs wouldn’t seem out of place in Disney’s “Frozen” (I haven’t seen it), though perhaps as the words of a young highland lass, “Brave” might be a better example.

I have seen Josephine Sillars a number of times, but for this showcase she was on top form.

“My name is Josephine and I’m gonna play some songs”. A simple but accurate introduction which underplayed her true ability.

For an acoustic showcase, it was amazing to have got the first two acts without seeing a guitar, Josephines piano playing is a true talent and her song writing impressive. Sweet, quirky, and I’m sure she won’t be upset for me to say slightly geeky, she stormed through a set of catchy songs.

Josephine played a unique cover of The Front Bottoms’ “Twin Sized Mattress” and explains how she got a dirty look from their lead singer when she went to see them live, stating “no matter how amazing the songs are, all bands can be considered whiny.” Along with her latest single “Hello” which showed off Josephine’s powerful voice, we were treated to “twice internationally acclaimed” “Little Footsteps”, and I’m glad that she played my personal favourite “Hurricanes”.

Craig Robertson, ex The Frues singer took things up a notch with a much less delicate sound than we’d had so far tonight. He started with a short instrumental track joking “that was just to make sure my guitar was in tune.”

Craig has a classic rock voice, slightly growly and slightly American in sound, definitely a strength of his, at times Craig’s voice reminded me of Axl Rose (in a different pitch), though Craig is a lot less of a dick. One of Craig’s songs flopped half way through and came to an abrupt stop and honestly told the crowd that he hadn’t practiced that one enough. A cover of “The Fresh Prince of Bel-air” was a pleasant surprise, though at times Craig seemed unsure of the words.

Overall I would say Craig was a bit unrehearsed for the show, with a make-it-up-as-I-go-along setlist, and it’s a shame because the Showcases to most people are a big deal and something worth a bit of effort. Despite this, I still enjoyed Craig’s well humoured feet tapping set, and I look forward to seeing him again.

Music +, as mentioned earlier is a programme which gives opportunities to young musicians to learn more about the music industry through mentorship and practical experience. For each young person the experience is tailored towards their needs and in many cases gives the young musicians the opportunity to play at some of the north’s festivals.

Like Imogen earlier, Hollie Atkinson is another talented youth who has been taken into the scheme. Not that Hollie Atkinson needed the festival slot aspect of the programme as she had only gone and won Bella’s Got Talent in 2013 to secure her slot earlier this year!

She started with a song called “Whisper”- simple chords, simple melody but catchy and enjoyable. From the second song Hollie showed that she needed no backup, with a percussive guitar that drove the set along. Hollie had a very supporting audience of friends and family, what seemed like half of Nairn had turned out to see her.

As the set went along, both her voice and her guitar playing improved; not that she seemed nervous at the start, but perhaps she was more relaxed towards the end. One of her songs as a chorus “Won’t stop until you’ve won”- perhaps, hopefully, this is her attitude to music and she will do everything she can to succeed. Her final song, “Hold On” was my favourite from her set, instantly familiar and a real credit to her ability.

Strange to call someone of just 19 a veteran, but after starting so young and with such a high reputation, Megan Blyth was the most experienced solo musician of the night, though by this point, and by no fault of hers, the room had began to unsettle. From her first song “Ashes”, it was clear that she was the most competent guitarist of the evening. Megan’s voice was shown off to it’s full and impressive dynamic range in all songs.

The only issue I have with Megan is her articulation, where sometimes I struggle to understand her words, though this is but a small issue compared to her talents. A particular highlight of her set was the title track from her EP, “The Devil’s Own”, a song based around a quote from William Blake; “In the universe, there are things that are known, and things that are unknown, and in between, there are doors”. Megan Blyth finished off with a fine cover of Bonnie Raitt’s song “ Angel from Montgomery”.

There certainly was some great music tonight. If I could make one little quibble it would have been the order; audience attention might have been easier to keep if they’d used the the clarsach and the piano to break up the repetitiveness of guitar.

You can catch all our other Ironworks Showcase coverage here.