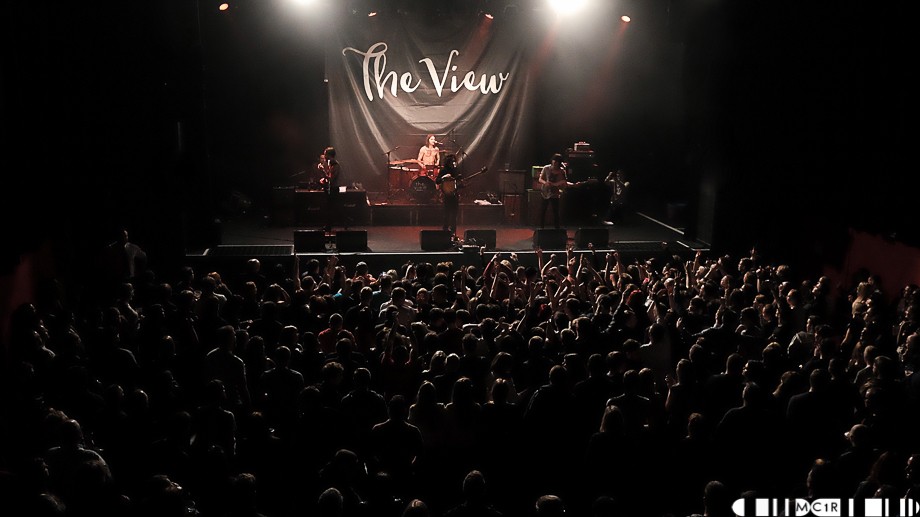 Vladimir, Brownbear and The View at The Ironworks on Sunday 29th March. A review.

There’s no two ways about it, Dundee’s Vladimir have been working hard and attracting a fair bit of attention.

Nominated for a SAMA last year in the Best Rock Alternative category, they’ve supported the likes of the Twilight Sad and sold out their own headline gigs as part of a UK tour, including King Tut’s.

They are four young men in black who describe their music as ‘bleak’ and include making a sound engineer cry on their CV. They were loud enough, but not in the same league as say Mogwai, and bleak in an 80’s Thatcherite kind of way with hints of Theatre of Hate but with a stronger flavour of Bauhaus.

Their cover of Underworld’s ‘Born Slippy’ was however, exceptional.

They do seem determined to classify themselves as outsiders so I don’t know if they’ll thank me for liking them and recommending that you make an effort to check them out – I’m genuinely hoping they venture north again sometime soon.

Vladimir put in (sorry, had to be done, they do ‘like the East’ after all) a fine shift although the full-stop cry of ‘We are Vladimir!’ was a tad too ‘This is Sparta’: minus the six pack.

To melt the bleak the latest incarnation of Brownbear. I think this is about the third time I’ve caught Brownbear, initially with the Bandits and then a Matt Hickman solo at Belladrum; and I’ve enjoyed the performances every time.

There is warmth and craft and subtlety in what was a strong set from start to finish.

I do have a liking for the particular acoustic alternative folk sensibilities that Brownbear deliver.

The acoustic guitar sits right at the centre with everything else spinning off it and held together by the aforementioned Matt’s excellent voice.

They close the set with their first single ‘Olive Tree’ (which for me defines what they’re all about particularly well), followed by their most recent release “Dead or Alive’. The latter dials up the rockier side of Brownbear just a tad.

Hmm, fans of The View – of which there are many – might want to look away now. I tried, I really did. I hadn’t heard anything of the band before tonight so I did a fair bit of research and trawled through the usual sources checking out videos and was, well, underwhelmed.

And then I turn up and park beside an impressive tour bus, and the fans are jumping and chanting 20 minutes ahead of their appearance on stage at an almost full Ironworks.

So I’m thinking, maybe they are one of those sensational live acts that lose something in the studio . . . Nope. I could’ve watched the drummer Steven Morrison all night, but that’s about it.

I mean they have an impressive track record. Well mostly – it kind of reads like a parallel of the UK economy: boom and bust followed by a slow steady flat recovery (of which their current UK tour appears to be a part of).

But it seems to me that they have en route plundered every nook and cranny of the truly vast indie catalogue (and sometimes within one song). As a consequence while that makes them instantly accessible, it also makes them equally forgettable. I didn’t ‘actively dislike’ them, I’m just never under any circumstances going to be wearing the t-shirt.

But hey, they have been going down a storm on this tour and have by all accounts been on fire with, for example, a particularly impressive gig at the Barrowlands. Not for me, but if I am to be totally honest, I think I was in a minority of one.