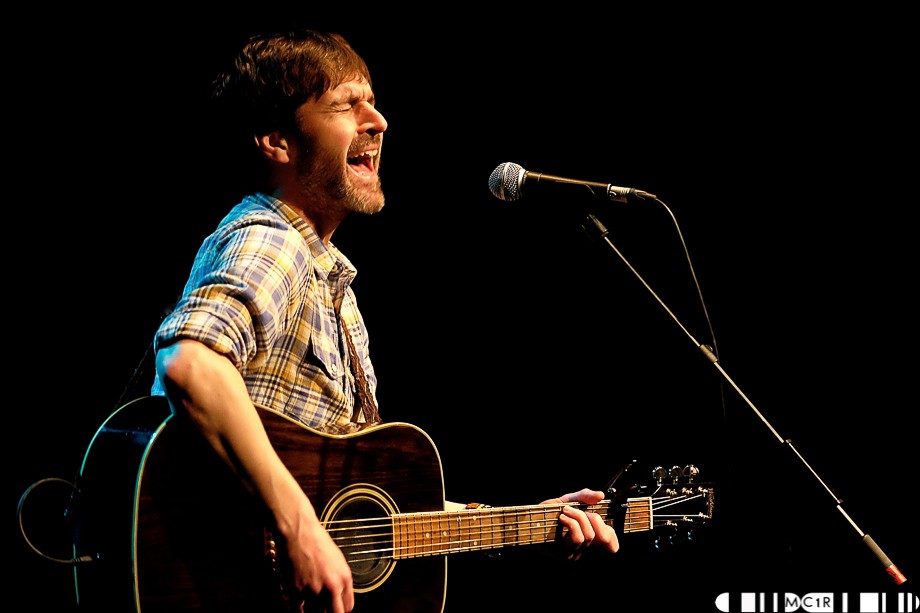 Dr Wook and Mark Morris at the One Touch Theatre (Eden Court) on Friday 8th May 2015. A review.

The One Touch Theatre at Eden Court just might be one of my favourite music venues. It certainly is from the perspective of an attentive, considerate audience with no loud chatter competing with the acts, which is particularly important in respect of this evening’s two acoustic performances.

Dr Wook (a.k.a. Kris Douglas) gave me a few of my favourite songs last year since when he has added Paul Elliott (Pel) to the mix providing what Kris calls ‘ambience’ to the songs. I suppose before I go any further (in an effort to clarify noms de plume, etc) I need to cut to the end of the set.

This is the third time now I have seen Dr Wook accompanied by Pel and while songs, sets and acts inevitably evolve I wasn’t sure whether Pel was a permanent feature or an experiment within the context of the set and sound. So when Kris signed off with “We’ve been Dr Wook’, it would seem then that Kris and Pel are, Dr Wook. Hope that’s all clear and I do of course stand to be corrected.

Kris is one of my favourite performers (solo or otherwise) generating an intensity in performance few can match. He has also, as alluded to above, a genuine song-writing talent. So I’m not going to mess with his judgement here, but, if ambience is about developing the aura, mood, tone and tenor then the addition of Pel has certainly done that: but it’s quite a different flavour from a solo Kris Douglas.

All of the songs that feature on the Never Behind E.P. and a fine cover of ‘Love Vigilantes’ are aired this evening. The set was well received by an appreciative audience including a couple from Edinburgh celebrating their first wedding anniversary (that’ll be paper). In a nice touch towards the end Kris had the house lights turned up so that he could see the audience to thank them. Meantime, look out for new E.P. Street Crawler due out this autumn.

Mark Morriss was this evenings headline act and while he does perform with a full band at times, tonight it is one man and his guitar. Now, to be honest, the vast bulk of that Brit-pop stuff left me cold and I was delighted when it passed, so The Bluetones have never even registered with me.

I wasn’t going to mention that Mark Morriss is former singer with said Bluetones, I had intended giving him a break from the constant references because I assumed he would be eager to showcase his solo stuff in it’s own right and put some distance between then and now. But when he opens with comments like ‘I know you didn’t come here just to hear old Bluetones’, I am left reflecting that, once again, I am unable to read peoples minds.

So, tonight’s set then consists of old Bluetones and solo work from Mark’s last two albums and his soon to be released album of covers. I was more familiar with the material from his last album Flash of Darkness and indeed he opened with ‘It’s hard to be good all the time’ from that album.

It’s an interesting album; to new ears (teenagers) it will sound refreshing and accessible. What I heard was Crosby Stills Nash and Young and an overall Laurel Canyon vibe: all late sixties and ‘indian summerish’. To be fair he carries it off well but with one qualification. Laurel Canyon was more metaphorical than geographical and value judgements aside a lot of the time composers were, well, stoned.

Mark’s compositions just sound too clean and a bit self-conscious: a bit like The Monkees on (old) Saturday morning telly. In fact my favourite song from the album ‘This is a lie and that’s the truth’ would sit comfortably on a Monkees greatest hits album. But I do like it.

On stage he is relaxed likeable and funny. He took some time to explain the genesis of his forthcoming album of covers. Essentially he had writers block and recording covers kept him going, but, he liked what he was hearing enough to commit to an album. He is a self-confessed Scott Walker fan, so tonight he sings Duchess: personally I much prefer the original. Inexplicably that song almost segues seamlessly into Laura Branigan’s ‘Self Control’ which he gave up on before the end; strange call.

I suppose by the end of the set my lasting impression was that whether old Bluetones, his own compositions or covers, it all sounded a bit ‘samey’.

Morriss is a hard working artist with a fine voice and obvious stage-craft, but there is of course a difference between a song conceived as acoustic versus a song conceived on an acoustic. Sometimes a tune stripped back leaves no more than a sonic skeleton; like popping a balloon in an anechoic chamber. I thought that was the difference between the two acts tonight, Mark Morriss was good, but all of the light, shade and intensity belonged to Dr Wook.