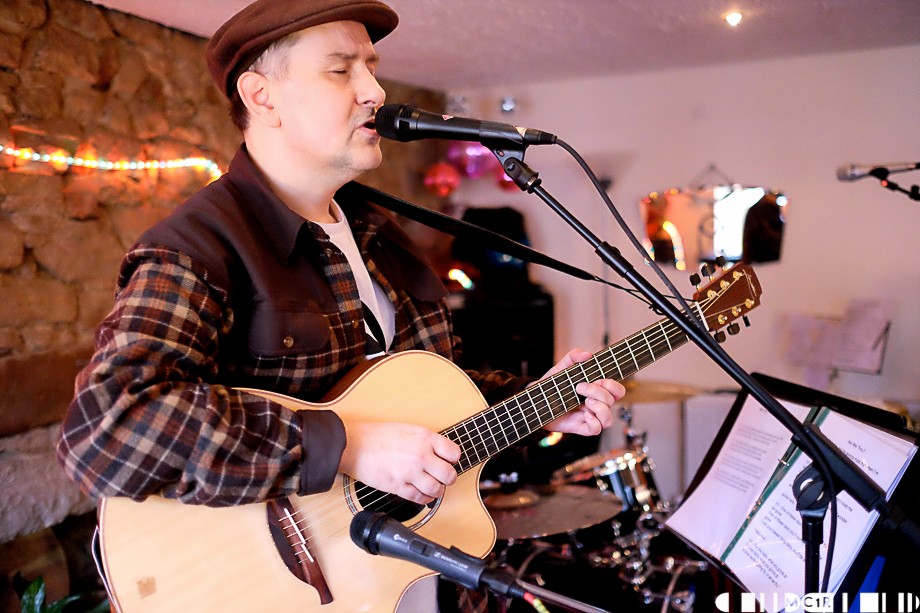 The new look Andy Gunn Band ,sees Andy being joined by Andrew Davidson, Luke Ellis and Fraser Mclean. The band will be debuting the live set at the Keppoch Inn on the 20th of June. We caught up with Andy and Fraser about the band.

The Keppoch gig will see the debut of the new look Andy Gunn Band, how did the line-up come about?

Fraser: Ive known Andy Gunn for several years and always liked his music and trying to catch his gigs so when he told me he was needing to put a band together I took it upon myself to get it sorted. I knew Andy Davidson (Drums) was always wanting to play/jam some blues but wasn’t sure how much time he had spare to dedicate to another band as he was still playing in The Whiskys at the time. He came along for a practice 1 night and that was that. Luke Ellis (Bass) is a friend of Andy Davidson and has just kinda fitted in perfectly.

How does the line-up change affect the dynamic of the band?

Andy G: Well, it’s great having Fraser on the rhythm guitar, as it frees me up to concentrate on the lead. I can breathe a bit more now, I don’t have to worry about filling up the sound playing lead and rhythm at the same time. And the guys on bass and drums sounded tight right from the start so it was an easy choice.

With ‘Miracle of Healing’ nearly reaching a year old, how does the album feel in context now?

Andy G: The album was put together by our friend Martin Stephenson of the Daintees. I was in hospital with cancer at the time and he just worked away quietly in the background getting the sessions together for it. Given this and the fact I never met half the players, I think it’s come together surprisingly well. I stand by it!

Musically where does the band go now?

Fraser: Personally I think we are gonna get this set as tight as possible and get some gigs under our belt which hopefully will include some festivals we will also will be writing and recording new material and hopefully produce a beast of an album in the very near future.

Andy managed a cameo at The Ironworks last month, would a return to the venue with the full band be something that interests you?

Fraser: Yes I definitely think a return to The Ironworks with a full band would interest us. Not Necessarily as a blues band as I think our set will cover a lot more genres, so support slots will be easier to fit into. I like the idea of The Showcases so maybe we will get an invite to one of these.

There has been strong support for Andy whether that be in audiences at gigs or peers helping out with band duties,how do you explain the support that you have received?

Andy G: Cos I’m just such a great guy haha! But seriously, music is a great healer, it brings people together and I’m grateful to all the musicians I’ve played with over the years. You can learn something from everyone. And of course I’m grateful to the people who come to the gigs and support us.. that’s why we do it.. to reach out and touch someone with the power of music..

What forthcoming gigs do you have, and what are the plans for the rest of 2015?

Fraser: We are currently looking at gigs for the future and we have a lot of offers which are pretty cool but we are going to concentrate on our first gig at The Keppoch and make a plan after that. Our plans for 2015 as a band are really to get a real good album out there and just generally have a bit of craic but also have time to enjoy family life at home too. That’s whats its all about at the end of the day.

Keep up with the band via Facebook and catch them at the Keppoch on the 20th of June.