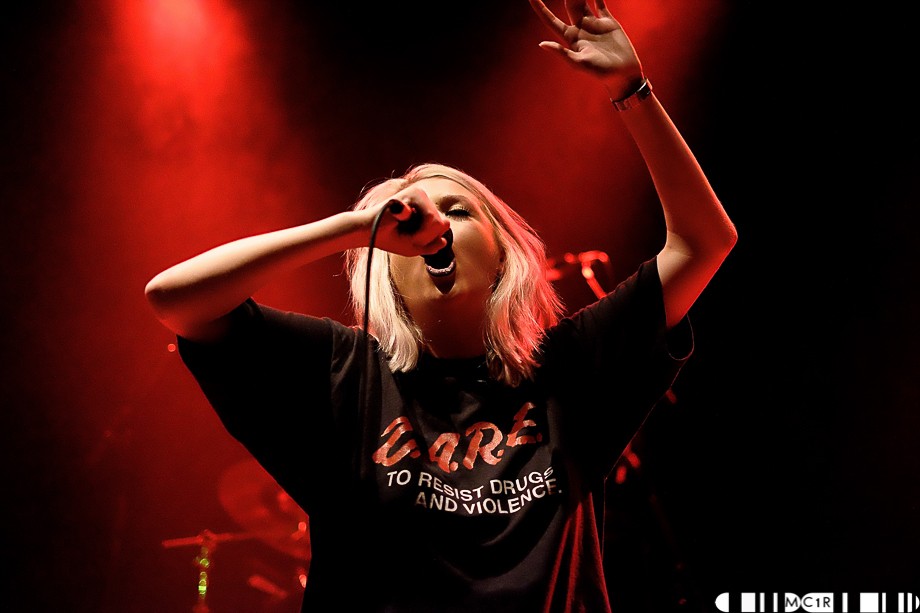 Womps give the Market Bar a good kicking with a superb blast of garage rock. They’ve been here before under the guise of Algernon Doll and I’ll admit to a feeling a bit of trepidation after giving their previous incarnation a less than glowing review. I’m a firm believer in keeping an open mind though and in this instance I’m glad I did.

This is good stuff, loud as hell, plenty of attitude and some fine fuzzy riffs. They’ve been recording with none other than Steve Albini and the man’s influence has clearly rubbed off. Keep an eye and ear out for this bunch, I think we’re going be seeing further rumbles in the future.

At the other end of the spectrum (and the town) the anticipation is growing in the Ironworks for some of our own home-grown hip hop in the form of Spring Break. The Departure Lounge EP has been on most of my playlists over the last month and I was keen to see if they lived up to expectations. And they do.

It really shouldn’t work, rapping about tractors (with its own wee dance routine) and about a bloke so mad he could punch a dolphin is so utterly ridiculous that audiences should be walking away in droves. But it’s all delivered with tongue firmly in cheek (there’s no danger here of anyone taking themselves too seriously) and they go down an absolute storm, a particular highlight being a cover of ‘Pumped Up Kicks’ by Foster the People with the chorus changed slightly to ‘Jumped Up Pricks’.

Tracks from the EP all feature here, Degenerative Eloquence and The Slouch all sounding as good if not better performed live, ‘What’s the fascination with procrastination’ is still one of my favourite lyrics of this year so far.‘Tractor Tractor, Tractor Tractor, Digger, Digger, Digger and a Dumper Truck’… an earworm to end all earworms.

If you hadn’t already noticed, we had the honour of hosting our own stage for XPONorth in The Room featuring local act Bite Nite The Mirror Trap from Dundee and AmatrArt from Glasgow along with fellow Glaswegians Nieves. I managed to catch AmatrArt during their set and was mightily impressed with their musicianship and a superb rhythm section. It’s complex music and hard to pin down, having me flitting between comparisons of Paranoid Android era Radiohead, a bit of prog and math rock along with harmonies and some fairly haunting vocals.

A sweltering Mad Hatters hosted Yuko Yuko from The Netherlands, billing themselves as ‘psych pop and new wave’ it’s hard to find a better genre to pin them down to. They are certainly infectious and inspire some lively dancing with their upbeat melodies and punky pop tunes. European bands seemed to have tapped into early nineties indie-pop of late and they were making me very nostalgic for the days of the Sugarcubes, B52s and even the Pixies to some extent. Again the Hatter’s sound doesn’t always help bands here and they did on occasion succumb to a bit of murky noise.

I had never seen Hector Bizerk before, up till recently being fairly cynical about Scottish hiphop ‘scene’, but the likes of Stanley Odd and Spring Break have reversed that opinion and the buzz surrounding Hector Bizerk’s appearance proved too much to resist. What quickly comes to the fore is that he is a compelling and energetic performer. There’s no messing about, this is pure and unadulterated raw rap. It’s mostly just him and a drummer with little in the way of musical accompaniment; however he still manages to make a colossal amount of noise and the lanyarded XPONorth attendees lap up every last syllable uttered by Mr Bizerk.

‘Wee Charlotte’ joins him on stage to soften the edges for a while but this is for the most part Hector Bizerk’s church and the masses drop to their knees on his hollered command. He’d said that because he’d been up this way a few times before, he wanted to try doing something a bit different and judging by the reaction of the audience and in the opinion of this reviewer, it had the desired result. As a rule we don’t mark gigs out of ten at IGigs but if we did, this would be a 10/10. Superb.

The finale of the whole event was given to Kloe, who it would appear is being touted as another ‘next big thing’ for the pop industry and on the whole she seems to fit the bill. Starting off as another singer-songwriter armed with a guitar, she’s worked with the likes of Lewis Gardiner from The Prides to flesh out and develop her own sound and it seems to be paying off.

The downside? Her vocals were far too low down in the mix and it was very difficult to hear what she was singing. In fairness to her she did her best to get that sorted out and when it did briefly get fixed out she sounded good. Vocally there’s bound to be a few Ellie Goulding comparisons bandied about but that needn’t be a bad thing at all.

Please check out our other XpoNorth coverage.

Lionel ramp it up

Here we go with Xpo