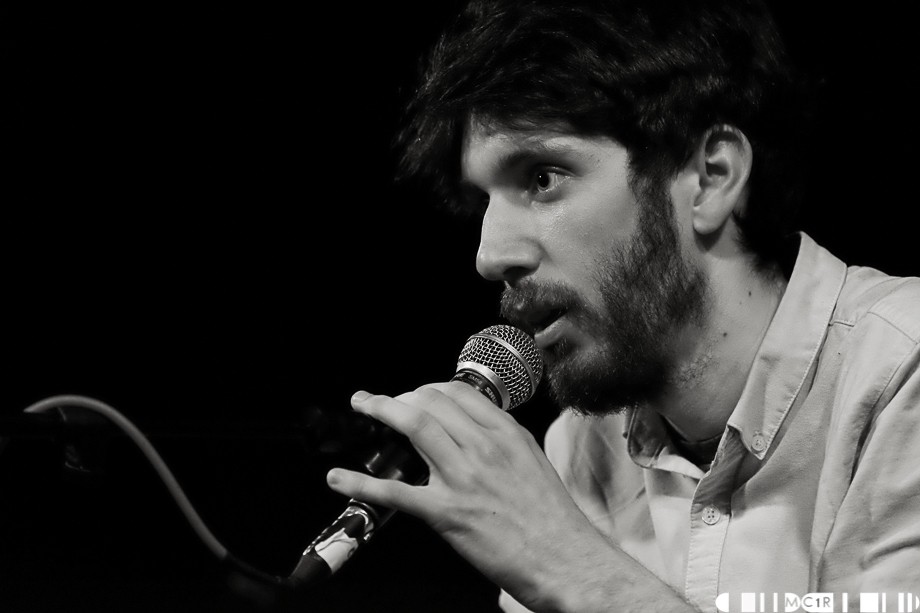 XpoNorth. A brief reflection on some personal highlights.

This year I took the time to plan my XpoNorth exploits with the emphasis on taking more time out to listen (taking photos affects my hearing, true). I stuck to my pre-festival plan with the exception of missing out on We Came from the North, but found myself caught up instead with a really fine set from Møgen.

So, to my highlights, of which there are three.

Hector Bizerk were sensational at The Ironworks. I wasn’t fretting in the least that it hadn’t been that long since I last caught them and in any event needn’t have worried about over-exposure.

This was quite a different experience with a return to ‘the old days’. Louie and Audrey treated us to some of their older material accompanied only by their flag bearer dancer alongside regular collaborator, visual artist Pearl Kinnear.

Stripping it back to essentially voice and drums served only to emphasise the power of both and gripped an audience that chanted, danced and smiled throughout.

Hector Bizerk were joined on stage at one point by Charlotte Brimner, an artist I had caught at last year’s year GoNorth. Now she too is re-branded and emerging from something of a musical metamorphosis as beat boxing, rapping, sampling and singing Be Charlotte, at the core of what she does is still her very fine voice.

Be Charlotte shared vocals with Louie while Audrey took to acoustic guitar – I understand we can expect an EP from Be Charlotte produced by Audrey in the near future. Meantime, I’m searching the calendar for the next opportunity to catch Hector Bizerk live: I’m hooked.

Perhaps as close to the opposite end of the performance spectrum as you’ll find is singer songwriter Finn LeMarinel. He may be quiet, there may be space and emptiness in there, he may have a voice that is delicate, sweet and even fragile, but he makes a massive impact.Instantly had me thinking of the likes of Joanna Newsom and Justin Vernon but his picking and opening up of the percussive elements of the guitar reminded me also of RM Hubbert.

While Hubby is drawn towards Latin influences, Finn is more African. His determination to try and make the guitar sound like the African kora has produced something blindingly exquisite.

The end product is sparse and deceptive in that it is not simple: it is complex. It was a full house at Madhatters and I’ve seen a few of those over the last few years. But this was the first time that any artist had beckoned the crowd toward the stage – “because I’m quiet” – and then asked them to sit on the floor, which they duly did.

I loved the naked minimalism of this live set, from what I’ve heard the material that Finn has recorded can include more that just guitar and voice, but it is no less special for that. On my shopping list then is his new EP, released on Electric Honey (Belle & Sebastian, Biffy Clyro, Snow Patrol) ‘Love is Waves’.

I popped downstairs to catch what turned out to be (for me) the gig of the festival: Kathryn Joseph. Showcasing her album ‘‘Bones You Have Thrown Me and Blood I’ve Spilled’

, this was a performance that made me put the camera down quicker than I might usually.

First up she has a distinctive voice, although not wholly unique; if you haven’t heard Kathryn but are familiar with Julia Stone or Melanie Safka you’re in the right area. But it’s never as simple as ‘sounds like’ – this is the voice Kathryn Joseph was given and in that respect I have always admired artists who work with their vocal gifts without trying to modify them too much, there is an honesty to that. Indeed I think it is that quality, honesty, which lies at the heart of all she does.

Bearing in mind what I said about Finn, I have to say that Kathryn Joseph took the performance aspect up a notch: she inhabits the stage with one of the most engaging persona’s I have met in some time. I suspect being caught in her gaze would be akin to sitting across from Marina Abramovic during one of her performance art pieces: in fact if Abramovic could sing . . .

And then there is her companion on stage, Marcus Mackay who provided extraordinary percussion throughout. He is also responsible for recording Kathryn on his Hits the Fan label (Frightened Rabbit) and ,I think I’m right in saying, for persuading her to commit to the recording process in the first place. This was an album that had been lurking around for some three years or more, and I’m grateful for the alignment of circumstance that let it see the light of day.

The album is precisely that: emotionally engaging songs that appear in a very specific order and are not to be messed with, each of them a short story in their own right. Not one for the sample and skip culture it is to be listened to from start through to finish. You don’t need to know the words to sense that there is personal investment here, catharsis, the overall feel is a set of songs sitting somewhere between a personal psalm and a prayer: piano and voice working together perfectly. But the lyrics in themselves are spectacular. The album is not on my shopping list, already got it.

All three of these acts had performance at their core. To perform is to engage with an audience on various levels – specifically to harness the present, to entertain and to excite. And all three had that truly organic quality, they gave a lot of themselves on stage and their material is deeply personal and drawn from the stuff of life.