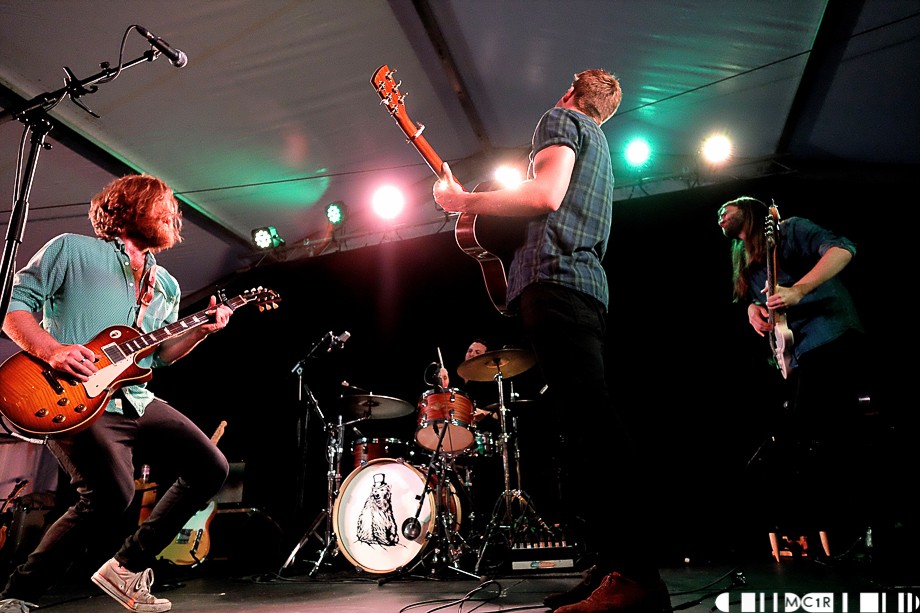 The Tent on the Pier, Ullapool, starring Eilidh Anderson, Spring Break and Hunter & the Bear: a review of the evening.

At the risk of flogging a dead horse, once again social media came up trumps in the promotion strategy toolbox, alerting me to the Tent at the Pier event at my favourite stop on the A835, Ullapool. An evening intended in part to entertain the crews of the skiffs rowing their hearts out in the three-day regatta, it was a sold out tent, a crowd in good cheer and a well judged trio of acts.

It’s always good to be introduced to a brand new act and tonight that role was handed to local girl Eilidh Anderson. Still at school (I think she is 15, 16 at most) I was impressed by her confidence on stage – I should qualify that perhaps by saying that if she was at all nervous she really didn’t show it.

Equally impressive was that she took on a thirty minute set containing only one cover. A big voice with an impressive range, a hatful of self-penned songs strong on melody and a stage presence that belongs to someone with much more experience, this was a memorable first encounter.

Eilidh of course hasn’t just suddenly appeared from nowhere on the night, she has been playing gigs locally and on the strength of this performance I’ll be surprised if she doesn’t make an appearance at the end of season Loopallu festival. Good technique on the guitar, some picking strumming and drumming allied to that voice – definitely one to look out for.

Sharpen your suits dig out your shades and open your ears, next up was T-Breakers, Spring Break. Well not quite, Emily Mackinnon was unable to make it this evening and her vocal duties were taken on by the very able Ashley McKay – and what a great job she did too. Spring Break weren’t going to showcase any new material, not this close to Sundays appearance at T in the Park, but talking to the rapping raconteur DJ Butterscotch, new compositions are under construction. Meantime, their live act is currently one of my favourites and I take some enjoyment in watching crowds new to Spring Break slowly figure out what was is going on. And then the shuffling, dancing and smiling kicks in.

The now familiar (to me anyway) favourites were given a run out. I’m becoming increasingly fond of the melody break in The Slouch, Dolphin Puncher is aquatic genius and I swear that if I had had one more tin of beer I would have taught the rest of the crowd the dance that goes with Tractor Tractor. As it was they were in very fine voice. Eilidh Anderson’s evening wasn’t quite over; having included Pumped Up Kicks as the one cover in her set she was invited back on stage for the Spring Break version. A quick tutorial from Ashley and off they went – cracking set and of course, we wish them good luck for T in the Park.

My first introduction to Hunter & the Bear was at last years Loopallu and I – and a really good sized crowd – had very much enjoyed their set; so it was good to see them take to the stage to round off the evening. They are not necessarily a genre-defying band but they do mix and match wonderfully well, roaming freely across folk rock, country rock, and Americana among others. They pay homage to their influences, particularly in delivering a welcome cover of Springsteen’s The River, but it has to be said that Hunter & the Bear have a lot about them that is unique to them – they really do have a well defined sound.

I think what I like most about them is their on stage dynamic, what comes across strongly is that here you have four guys who really love music, love performing and who really like each other – that really does reach the crowd in ways that some other ‘too cool too move’ bands never will. They mix the set up beautifully, they can really rock out and they toy with jazz inspired themes with each of them having a personal introduction accompanied by a break which all adds to the theatre. The strong melodic base to their set is fluid with the introduction of mandolin signalling a subtle shift here and there, and then for Wounded they take it right down to three vocals and an acoustic guitar. On that note, Will on lead vocals has a really fine voice and, with three other singers in the band, the harmonies that feature prominently are quite special. Their seventy-minute set fizzed past leaving the punters wanting more – job done.

See more pictures from the night.