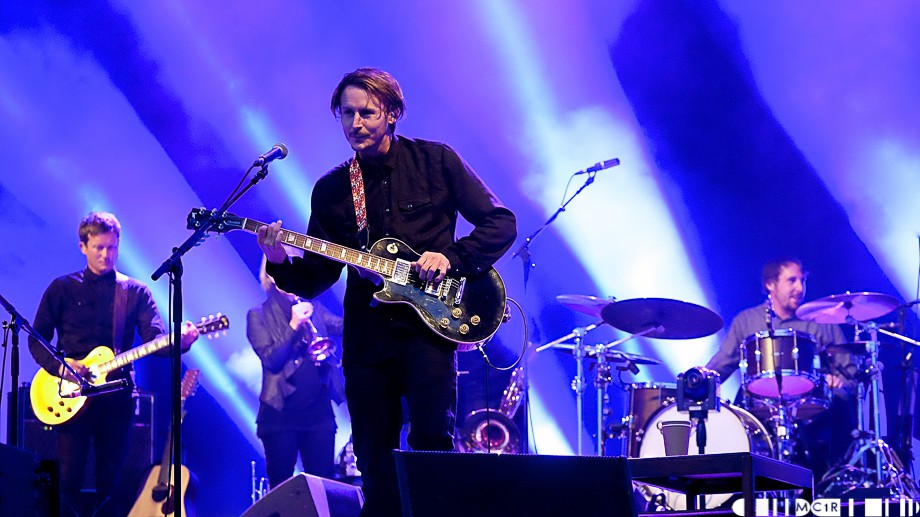 The first night of Gentlemen of the Road Aviemore Stopover, 31/7/2015. A review.

The Gentlemen of the Road: Aviemore Stopover kicked off on Friday 29th July and 20,000 festival go-ers kept on kicking through the mud, the rain, the wind and a few hours of sunshine all weekend.

For those of you unfamiliar with the stopovers: they are festivals run by British band Mumford & Sons. They essentially take a festival on the road, stopping off in cities, towns and rural idyllic locations across the world.

As a concept it works. It was one of the better mapped-out festivals I’ve been to in recent years: A massive main stage surrounded by plenty of open space was the centre of the event with a smaller stage bang in the middle of the trading tents and food stalls. I felt like this was a smart move, allowing smaller local bands a chance to gather big crowds as people ambled through the middle of the arena.

The only downside was the lack of any covered space. If it had been a gloriously sunny weekend, this would have gone without a thought but amidst the torrential downpours that typically come as part of midsummer in Scotland, it would have been ideal to have perhaps the second stage in a sheltered area, as unless you were hiding in the real ale bar or your own damp Tesco two man all weekend, there was no escaping the elements but hey, you kinda sign up for that when you buy the ticket.

Starting things off on Friday were John O’ Groats boys Neon Waltz. Since I first reviewed this band at Loopallu last year, things have really kicked off for them. They’ve played many a venue and festival and have secured a major record deal with Atlantic Records. Things have moved fast for this relatively new band and with good reason too.

Their emotive rock music has a steady feel, as if it’s been ingrained in people’s record collections for years. Their performance was warm and welcoming with songs such as Bare Wood Aisles and Sombre Fayre showing off their signature sound and easing people into the weekend to come.

The describe themselves as ‘A proper rock’n’roll band for the modern age. Raw and raucous, they peddle their own brew of intoxicated fun.’ and I’d say thats pretty spot on. They went in all guns blazing for a fun filled set. They were scheduled to play a full, late night set at the Old Bridge Inn later that evening. Little Mammoths, big sound.

South African pop trio Beatenberg were one of the highlights of the festival for me. They travelled over 24 hours all the way from Capetown to play to the Aviemore crowd. A journey I’m glad they made. Two of the members shared with us that they had Scottish roots and it was their first journey to the country which made it a special occasion for the band as well as the audience, hearing them live here for the first time.

The music has a refreshing, perfect summer sound that has most commonly come to be associated with the likes of Paul Simon’s Graceland album however roots run much deeper here with a life-long awareness of the culture and music of South Africa. They played first on the main stage and on Stage 2 the following afternoon both to big, dancing crowds.

‘Hello, my name is Rachel and I live about 20 minutes in that direction.’ Rachel Sermanni took to the main stage to play against the backdrop of her home town, Carrbridge. Rachel’s newest album Tied to the Moon was released on July 10th and marked a turning point for the young ‘folk noir’ songwriter.

Instrumentally, things have gotten electric. This leads to a much fuller, grittier sound but importantly, the beauty of Rachel’s lyrics are complemented, rather than crowded by this. The set was made up of a mixture of material, ranging from the 2012 album Under Mountain to the new material, including the first single from Tied to the Moon, Tractor.

Rachel was excited to share her new slightly more festival-ready material and the crowd were happy to hear them, as the sun dipped behind the fast approaching rain clouds. Rachel Sermanni is touring in the UK this autumn.

Baby Strange took to Stage 2 and owned it. Baby Strange are a Glasgow hailing punk trio. Proper punk, with just a smidge of pop added in. They gave a high energy performance from start to finish, getting the crowd jiggling to a point where they might not have noticed they were getting caught in a drizzly rain shower. The band have a pretty jam packed tour schedule right across the UK from now until mid October.

The very best part of Friday was in my opinion ..well, The Very Best. Completely unique from every other act this weekend, The Very Best describe themselves as a Afro/Euro Music Duo fitting into the Global Pop genre. The duo, Esau Mwamwaya and Johan Hugo were joined on stage by Seye Adelekan and Justin Taylor, vocalist of American EDM band Jutty Ranx. Together these musicians put together a euphoric and dynamic set.

The band sing in a mixture of English and Chichewa, the language of Malawi, the home of Esau Mwamwaya. Vocals are set against big electronic beats, drumming, guitar and bass, this combined with the enthusiasm of the band made for the perfect festival set. At one point The Very Best were joined by Mumford and Sons (however missing Mr Mumford) to play a song they had written only the week before.

After a rocky start (which we’ll forgive them for, having never played the song before) it was an exciting mix of afro pop and British indie. As the set came to a close, the heavens had well and truly opened but if nothing else, it added to the atmosphere of the bouncing crowd. The Very Best lived up to their name for the Aviemore crowd.

At this point, the rain got bad. Jeans that had once been light blue, turned dark. Fake tans that had been evenly orange became streaky orange and devastatingly, they had to close down Stage 2 for safety reasons. This meant that indie pop band Model Aeroplanes had to miss their slot. The boys appeared on stage briefly to sincerely apologise and arrange a location for anybody who wished to get drunk in place of watching their set, which was bound to be a good one. Having seen the band previously at the likes of Brew at the Bog and Belladrum, I can vouch for them as being a cracking festival band. They’re great fun which shines through in their single Deep in the Pool which was released earlier this year.

At the fully functioning main stage, King Charles took to the stage, as a band of royal subjects waited eagerly. King Charles -born Charles Costa- first came into the limelight as a solo artist in 2009 after he became the first brit to The International Songwriting Competition with song Love Lust. This led to a signing with Universal Republic and the recording of his debut album LoveBlood.

Its hard to place the king within a particular genre. Some material falls more towards Folk Pop whereas some of the songs on LoveBlood take on a rockier sound. The set was primarily made up songs from the 2012 album, with songs such as Lady Percy and Bam Bam going down a treat. It was a regal performance to lead up to our Friday headliner, Ben Howard.

At only 28, Mr Howard has had an incredibly successful career. In 2013 he received the Brit Award for Best Solo Male Artist. Although both fall into the indie folk genre there are distinct stylistic differences between Howard’s 2011 debut album Every Kingdom and I Forgot Where We Were which came out last year. Instrumentally, the newer material is overwhelmingly beautiful in parts.

In some ways, Ben is an unlikely headliner, with many tracks lasting up to eight minutes long, emotional and dulcet in parts but he captivated the Aviemore audience and there was a huge bursts of applause for every song. Nevertheless, there was a distinct roar from the crowd as Ben played his hugely successful single Keep Your Head Up, from his first album. Although in my opinion, especially with the new material, I think I would rather see Ben Howard in a concert hall acoustically suitable for the 7 piece band that now plays alongside him, it was an incredible finish to the first day of the Aviemore stop over.

More Gentlemen of the Road coverage, but don’t miss any of our updates by signing up to our mailing list.