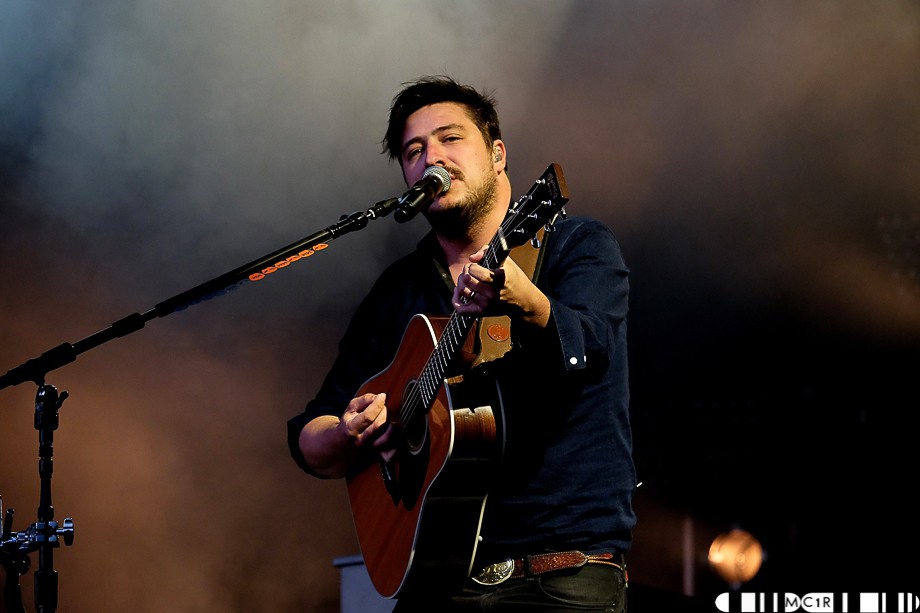 The final night of Gentlemen of the Road Aviemore Stopover, 1/8/2015. A review.

Ben Howard and co had set the bar high from day one, so arriving at day two of the Gentleman of the Road Aviemore stop over a few thoughts entered my mind. First, the alarming shift in the mud to grass ratio that had occurred since the previous night, but also the exciting buzz that still hung in the air as campers bravely removed themselves from their sleeping bag and got ready to do it all again.

We arrived just in time to receive the sad news that local folk funk trio Spring Break had been rained off Stage Two having only just gotten into their set. Disappointing as they know how to get a party going but they will be playing this coming weekend at Belladrum.

Scottish grunge fem-pop duo Honeyblood owned the mainstage during their early afternoon slot. The band consists of singer and guitarist Stina Tweeddale and drummer Cat Myers. Considering their fairly minimal set up, Honeyblood have a big sound. The bass of which lies in Cat Myers ace, intense drumming and is completed with Stina’s unapologetically powerful voice.

The band released their first album last year and treated us to many of the tracks from the self-named Honeyblood. The ladies were incredibly grateful to the crowd for coming to see them instead of opting to hide in their undoubtedly drier tents and greatly encouraged any form of dancing which incorporated umbrellas.

The high energy levels continued on the main stage for the incredible Jack Garratt. The music was inescapable as the bass vibrated through the mud and bounced around the Cairngorms. It wouldn’t be doing the young Mr Garratt any justice to just throw him into the EDM genre as a one-man-band and leave him there, rather he is a solo performer whose sound is tied together with big dubstep beats but complemented with gritty guitar riffs, enigmatic drumming and soulful scale-spanning vocals.

Also, if that wasn’t enough, he seems like a really nice bloke. Chatty and bubbly with the crowd between songs, again there was a lot of gratitude to the Aviemore crowd (who were thrilled by the set) and to Mumford and Sons for inviting him along for the ride. Jack Garratt is a busy bee, with live dates organised across several continents well into November. I can only imagine we’ll be hearing a lot of him as the year goes on.

Two of the acts playing at the stopover on Saturday released new albums the previous day. Now, Lianna La Havas’ new album ‘Blood’ and the Maccabees new release ‘Marks to Prove it’ are competing for the top spot on the UK Album Chart. The Maccabees are currently nudging ahead with several more hundred sales, however Lianna was the first to grace the Aviemore main stage.

The young singer songwriter is only 25 yet this is her second album to have quickly climbed the charts. Her songs are full of soul and in the case of Blood, often get a bit sassy too. Accompanied on stage by her band and magnificent backing vocals from Mariama Frida Touray, new songs such What You Don’t Do are perfect for festival crowds. At one point, the band left the stage leaving Lianna to perform song Age, in a more intimate fashion. She’s a very likable character. confidence and sassy and full of promises to return to Scotland later this year. (Let’s hope she keeps ‘em.)

Next up were The Maccabees, the second band to have a newly released album. I’ve stipulated many a that I struggle with the ‘indie rock’ genre, finding particularly in the last five years a lot of optimistic bands struggling towards the same sound with many of them failing to truly set themselves apart.

However, I grew up with a soft spot for The Maccabees, after first hearing the very lovely Toothpaste Kisses from their 2007 album Colour It In. They dived straight in with a lot of material from the new Marks to Prove it but the set spanned songs from all four of their albums including the song ‘Latchmere’ a song about the wave machine at the band’s local leisure centre. Its the wee things in life.

The main stage then played hosts to arguably one of the biggest bands to have ever come out of Scotland, Primal Scream. Perhaps a slightly controversial statement, however it can’t be argued that they stood out from the Gentlemen of the Road lineup, as having the longest and one of the most successful careers. Primal Scream have 10 albums to their name now, their last album having come out in 2013.

They played a set which mixed things up between the newer material and big hits that everybody wanted to hear such as Country Girl and Rocks. One of the biggest cheers came as frontman Bobby Gillespie announced that they were now going to play a couple of tracks from the Screamaedlica album. Screamadelica, released in 1991, really launched the career of the Primal Scream boys. It set the tone for psychedelic alternative rock in the 90’s and given the reaction of the crowd, the material is just as popular now as it was when it was first released. The band were cool, relaxed. Bobby Gillespie in all black almost appeared nonchalant about the whole thing. I guess having played to crowds at festivals such as Glastonbury and V Festival for decades now, we can forgive him for not appearing nervous.

And finally, the Gentlemen. The atmosphere in the main arena was one of excitement and expectation as the biggest crowd of the weekend grew in anticipation of the mighty Mumford and Sons. Almost every act on stage this weekend paid thanks for the band for all the hard work and organisation that goes into the Gentlemen of the Road stopovers, and after tying everything up on the business end of things, it seems fitting that they headline the final night of the festival and finish things off with a bang.

I have to say I had not been giddy with excitement when thinking of the Mumford and Sons performance, having listened to their new album Wilder Mind which was released on May 1st this year and not being overly enamoured with it, however, I would sum up their set by saying it was phenomenal. Not an adjective thrown around lightly but they really did put their all into it. In some ways Mumford and Sons have struggled to please their wide fanbase.

In 2010, the release of Sigh No More brought the boys universal adoration. People of all ages, fans of many genres, were listening to Shakespeare inspired lyrics and loving it. Banjos and tweed jackets rose in popularity as people just went Mumford mad. The next album Babel, released in 2012 was also popular but came with complaints that it was very ‘samey’ to the last.

Then after three years Marcus Mumford and co. brought us Wilder Mind, and from some corners there was outcry that it was too different from their previous winning formula. You can’t please ‘em all they say however whether a major fan of Sigh No More or newly hooked on Wilder Mind, there really was something for everyone in this headline set. The balance was just right between the new, rockier, electric material and the older favourites. The crowd were ecstatic as every song was performed with full on enthusiasm.

The band had a long list of thank yous to get through including their manager, the producer on their last album, James Ford (who closed the festival as part of EDM duo Simian Mobile Disco) and also all of the acts who played over the weekend and everybody who helped make the festival possible, including the lovely folk of Aviemore.

The night ended with a two song encore which drew the biggest cheer as the weekend as the band played Little Lion Man, the hugely successful single from the Sigh No More album. I think it’s fair to say that the Gentlemen can give themselves a fair pat on the back, not only for their awesome set but also for the success of the festival as a whole.(Photos of Mumford & Sons)

Simian Mobile Disco then kept the place electric, as folk danced and squelched about in the mud until the wee hours. Aviemore, you were ace.

More Gentlemen of the Road coverage, but don’t miss any of our updates by signing up to our mailing list.