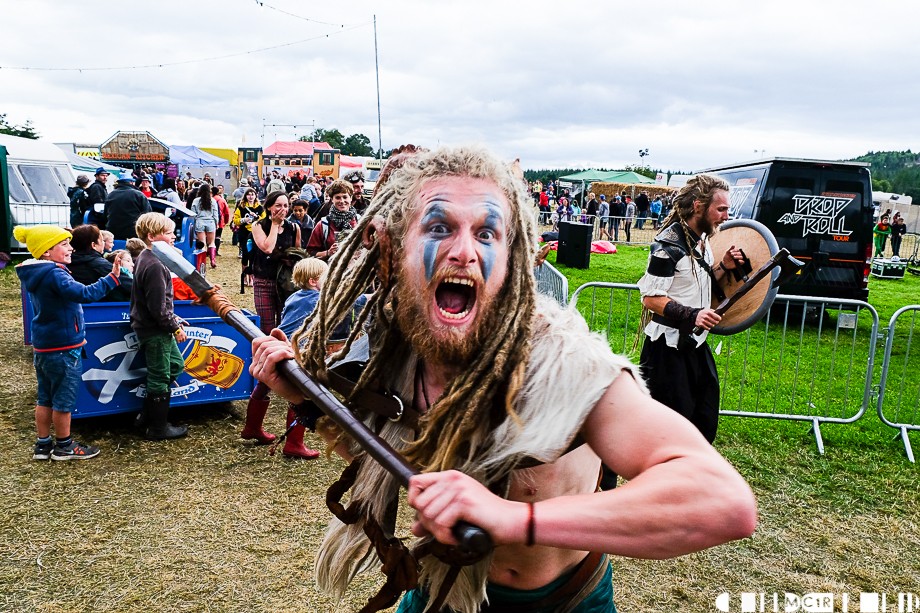 Another Bella – this time starting on Thursday. Left the house at 2.30pm thinking the road would be busy, but found the whole town snarled up. However taking the back routes got out as far as Moniack before getting stuck in traffic. One of the few positives to come out of the austerity cuts is that councils seem to be leaving road verges uncut. As I was on my own being caught in a stop go (more often stop than go) line of vehicles gave me loads of time to look at the wide range of plants growing – vetches, grasses, bindweeds, campions and others in abundance. Also listening to the cricket – come on Australia – what went wrong?

Arrived onsite at around about 5pm – just in time to rush to the Garden Stage to see the wonderful Keston Cobblers Club. They set the scene for the festival. This one was not going to be for the reverential listening to music – the emphasis was going to be good time, get up and go and dance stuff. Next on were the Northern (real Northern) Soul group Scooty and the Skyhooks who gave us a run through of their extensive range of soul classics.

As well as feel good dance, cold weather was another feature of this festival with temperatures well down on their usual. Resplendent in his polar bear style jump suit Correspondents lead singer Mr Bruce did not appear to feel the cold as he started into his energetic dance routine. This and the pulsating sonic backdrop provided by DJ Chuck started to disperse a warm glow through the arena. The final event of the evening was the return of the Proclaimers. I must admit they passed me by during their careers, but I was most impressed by their energy and the wit of their lyrics. They brought Thursday to a close with some great audience participatory singing.

Friday dawned dry and her indoors and the kids kept me company today. As usual the kids had a great time – special treats today included bouncing with Spiderman and the dodgems (had not been on these for years) – great fun.

The routine this year was more concentrated in the Garden Stage with a couple of forays out to the Black Isle Brewery Tent. Here we saw some of the talented local youth traditional music players in the form of the Caledonian Ceilidh Trail. Next it was down to the Garden Stage to see the latest incarnation of the Singing Kettle – the Fun Box – lots of fun being had by old and young alike. A break in proceeding allowed a trip round site with the kids –the usual magic being present with magic shows and puppeteers bringing fairy stories to life. After some poor personal attempts at crafting it was back to the Garden Stage for the Hayseed Dixie. This riotous bunch from America play heavy metal in bluegrass style. It should not work but it does – to tremendous effect. They will be in Ironworks soon – GO SEE!!

I thought the kids may want to get home, but no they wanted to stay which gave me the opportunity to see Idlewild. They are another band which passed me by so it was interesting to see them in the flesh. They also had the crowd singing along with their melodic songs.

Eddi Reader closed the evening in the Black Isle Tent. There was something very special in this performance. Eddi and her band transformed the tent in turns from Glasgow to France. Some of the songs reflected her time in France, whilst others came from her close knit Glasgow home community. She played a range of material from her Fairground Attraction days through to her most up to date CD Vagabond. The set opened with a poignant tribute to the late Cilla Black and closed with her recreating her reluctant Auntie Jean being persuaded to sing at a tenement get together – choosing Moon River.

Saturday again dawned dry – something of a record for this year and we headed out to the Garden Stage for a short percussive opening set by local group Rhythm Wave. They combined Celtic, African and South American beats to warm things up. Technical problems meant that second local band of the day Dorec-A-Belle had to play a truncated set. They were just getting into their stride when they were informed to cut the performance. This was disappointing as they were highlighting material from their first CD. This shows the band further evolving their sound both sonically (shades of Michael Nyman) and lyrically.

Another break in proceedings allowed time for a train ride around the site, a bit of mini pony trekking experience for the kids and some sand painting. Sand painting is great fun and very therapeutic. In these straitened times there is much talk about the value of library services. However as the clouds got lower and grayer and the rain started shelter was sought in the Library van from Highland Highlife. A nice selection of books and some interesting chat. Another example of the value of libraries. In the van we saw Joe Gibbs stride by. I jokingly said he was away to sort out the rain and indeed just shortly after the skies lifted, the rain stopped and everyone carried on having a good time.

It was then back to the Garden Stage to see Manran – nice to hear a good bit of Gaelic singing here. These boys now how to rock out in the Celtic way and treated the audience to a good selection of dance tunes. These provided a warming tonic to the cold past rain afternoon. The rain kept away for the rest of the day and it was amazing to hear the warm tones of Martha Reeves and the Vandellas echoing around the Belladrum arena. Given the cold it was a bit surreal to hear someone from a warm part of the world belting out Heatwave to a heavily jacketed crowd in a cool Scottish summer.

The kids were getting pretty tired by now and after an ice cream, hearing the Stranglers first two songs and saying bye bye to everything we left for home. Back at the car park as we were packing up it was really nice to hear the sounds from Dave Greenfield’s keyboards fluttering in the wind.

As usual there were large parts of the festival that we never managed to get to. We passed by the ever excellent Potting Shed and Free Range stages, and took in some of the very talented and diverse range of buskers appearing at various point throughout the site. We sat in on part of a talk on working and travelling abroad. We also visited the walled garden area. This used to be the quietest area on site but this year there were some Pictish/Viking rebel types on the loose!! We never made it to interesting named Burke and Hare. Maybe next year.

Highlights of the weekend: having fun with the kids, seeing things through their eyes, seeing a mini Spiderman and Captain America repel a Viking raid and the stunning performance by Eddi Reader and her band.

Another great festival and thanks to Mr Gibbs and his team.