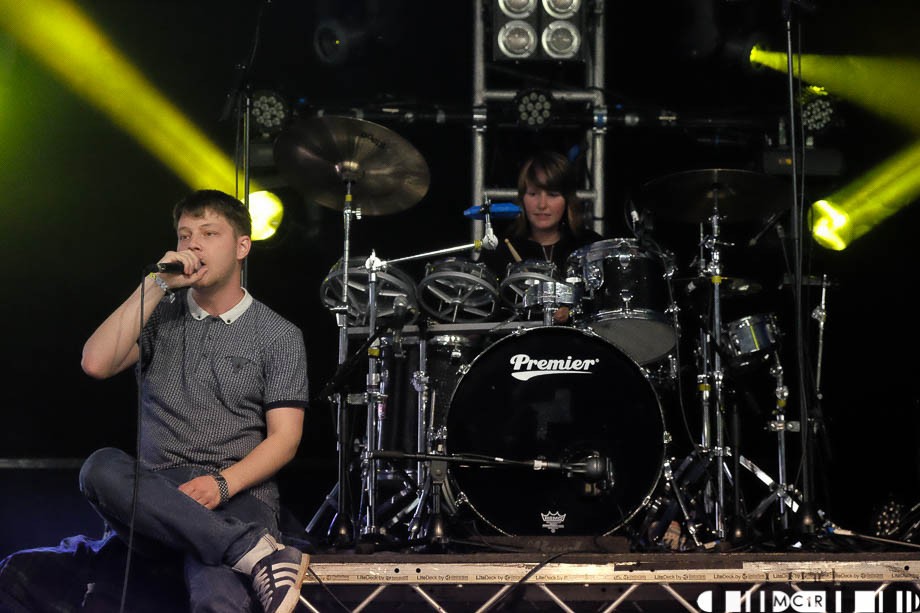 “We’ve only got thirty minutes so I’ll keep the pish to a minimum.” Emcee Louie is on bullish form and is keen to keep the momentum going in the tent after Iain McLaughlin’s strong start.

Hector Bizerk impressed us at XPO North with their stripped down set and this time round they’ve returned with the full band as well as near ubiquitous artist Pearl Kinnear to provide some further visual inspiration.

They’re in fine fettle and if anyone still had the nerve to feel a little dopey then this performance would surely fire a bit of spring into the most hungover of steps. ‘Festival Boy’ is dedicated to exactly that kind of punter, “anyone who indulged in the consumption of alcohol last night.”

Louie’s rapping is breathtakingly quick at times, along with Audrey Tait’s fearsome and frankly awesome drumming the core of the group is given added oomph with Fraser Sneddon on bass and David Calder on percussion and synth. It makes for a compelling and raw half hour of some of the finest and most original hiphop you’re going to get on these shores.

I managed to have a quick chat with their resident artist (for want of a better term!) Pearl who said they try and include her with them if the space on stage allows it. She and the rest of the band seem to be impressed with the vibe of the festival, the only downside (if you can call it that) is that they had to make a quick turnaround to get to the Tea in the Woods festival for their slot at 9:45pm.