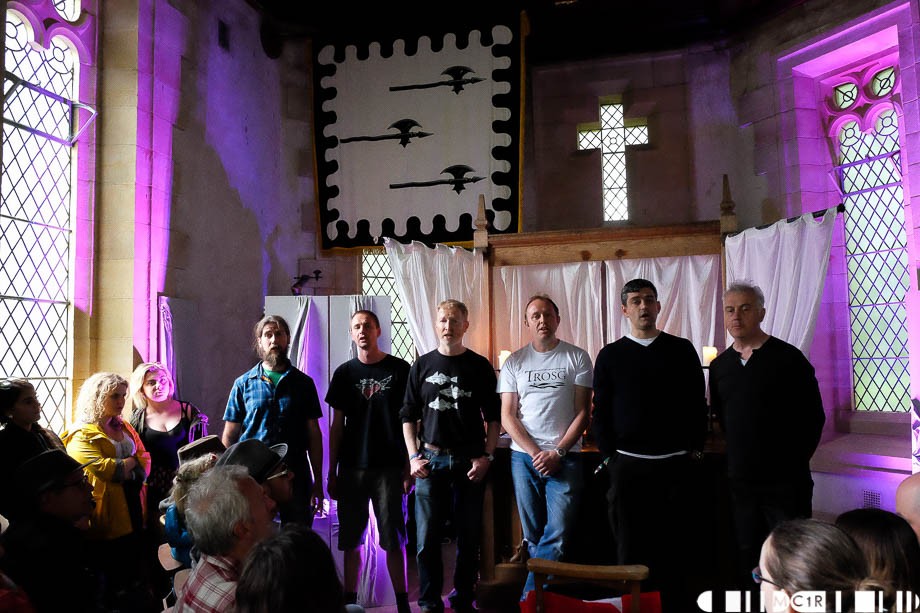 After a busy Friday, the day started early in the family camping area, in contrast to general camping where everyone stays up late and sleeps in late, this was very new to me. From inside my tent (pre 8am) I could hear excited voices of children bursting to bounce around bella again, in contrast the slightly weary voices of the parents getting breakfast organised.

Saturday at Belladrum is always a little calmer (to begin with), folks are feeling at home, more relaxed, a little dirtier and they may also be a little hung-over or tipsy. Strolling around that morning the crowd were wearing grins from the Friday night fun as they begin again, getting energy from one of the tasty food spots whose aroma’s make the mouth water, stovies with beetroot near the Shipping Forecast stage is a personal favourite of mine.

We headed to the Free Range Folk Stage and caught a couple of songs from Robin Bell, the track ‘Dreamers Life for me’ resonated strongly with the feeling Belladrum creates. Followed by a song about adventures had and tales told, dedicated to his deceased grandfather with a nod to family in the audience. I was sad to leave but we were drinkless and wanted to wander, popping in at the Burke and Hair catching someone on the bass ukulele, on route to some bike tricking craziness from Danny Macaskill, who was a big crowd gatherer, even earlier when warming up.

At 1.30pm the Black Isle Brewery tent hosted Goat Roaper Rodeo up from Wales this was no gentle acoustic country blues, it was powerful. The band’s energy was contagious as they danced with their instruments, twirling the double base, kicking their legs, shaking their long hair and jumping in time to big rock star style strums of the guitar, getting the crowd bopping and wigging to the fast tracks filled with beautiful country twang harmonies.

The track ‘Feels good to me’ embodied what everyone was thinking and feeling. With so much enthusiasm on stage you would never have know brothers Tom and Jim and band mate Sam had travelled up that day leaving at 3am and were heading off after the gig to grab a bite to eat to before driving back down south. Where they have been mastering there new LP ‘Cosmic Country Blue’ at Abbey Road Studio with producer Rodeo Stodart of the Magic numbers. Hopefully they will make it big and we will see them back again at Bella on the Garden Stage.

With Vikings charging, a golden cow dancing and super heroes whooshing around in the crowd of happy festival goers the mix of people and ages everywhere you look highlights the family friendly feeling there is at bella. At The Garden Stage the wind was blowing but the audience were most defiantly getting there groove on at James Brown is Annie especially the kids, there is a very bright future for funk music in those wee groovers. The band no longer has a female vocal (which is a shame) but they still have it, delivering great funk with saxophone and electric guitar.

We had planned to catch at bit of King Creosote but the heavens opened and with a couple of small people happily in tow plus a sooty hand puppet we like many headed for cover under a tree near the Black Isle Brewery were watched the different coloured giant condoms go by, I was wearing a clear one from UHI.

The rain stopped and just before 4.30pm at The Xpo North Seedlings stage Sara Bills and the Hasbeens were playing there second set of the weekend. Arriving in the tent I was immediately delighted by the number of ‘shiny people’ as Sara calls them, the tent was buzzing. Never disappointed their gigs are fun and full of lots of hello’s, hugs and boogie’n along to the fab alternative folk punk tunes with beautiful Invernesian vocals.

There amazing followers know all the words to and anyone new can instantly connect with the songs and absorb the atmosphere. A song about partying with your pals and even though I don’t agree with the sentiment of the final track ‘better off alone’, especially looking round the lovely crowd, it’s such a beautiful song that played on in mind!

The band were back to full strength again with Colin returning after being ill the day before and not being able to make the Potting Shed gig, he looked recovered and sung us a song. We were almost blessed with Sara’s 4 year old son Austin’s musical debut but he had just woken from a nap. With Dickie Bills (Sara’s dad) on drums it’s obvious this is a very talented musical family and I don’t think it will be long until we will see 3 generations of the Bills family on stage (maybe even this Saturday at the Bike Shed as part of the Merkinch Festival).

We meander towards The Temple across the site delighting in the amazing festival we were part of, by now everyone is very comfortable if a little dishevelled by radiating a warm glow. The Temple is on a wee hill surrounded by trees near the walled garden had been the venue for 2 wedding this year and now hosted TROSG the male side off shoot group from Inverness Gaelic Choir.

With bums on every seat and bodies against the wall the Temple was fit to burst as we joined Joe Gibbs and others lining the steps and pointing our ears to catch the beautiful voices as they slipped out the door. The crowd was fluid but never decreased in total, with people moving up as other people left and arrived.

The wind had got chilly so decided nipped back to the handy campsite, whilst leaving the Temple I caught the final track from Josephine Loop under the giant mushroom busking stage (Fungidelica) her whispery voice catching on the breeze and blowing towards the bottoms sitting on the floor around her and the legs walking by, stopping some like me in their tracks.

Layered up we headed to see Tantz at The Black Isle Brewery tent at 7.30pm, who I was super excited to see. On arrival I was delighted and confused to see a banjo, my bewilderment continued as the lead singer although lovely didn’t quite look like the Clarinet player I had been subtly stalking online. As I looked around I could see I was not alone churning the cogs in my head and when the band started there was no denying this was not the Jewish Gypsy music some expected but turned out it was Rusty Shackel billed for 2 hours earlier, they had been swapped, tiny grrrr only cause I walked past around that time on route elsewhere and though heard them but checked my book.

But even though it wasn’t as expected the big audience stayed and instantly forgot any disappointment they may have felt clapping, jumping and even singing along with the band, a bouncy mix of folk, roots and roll. The banjo twanged beautifully and the trumpet demanded attention as there punchy sound continued, a friend said they reminded her of early Mumford and Sons only better.

It wouldn’t be the bella finally without Garden Stage it’s the place where over 50% of the festival goers head and as we strolled down early to catch in with the other warm bodies we knew the crowd was already busy and anticipation could be felt.

Kasier Chiefs were amazing; they had the chocca crowd giving 100% from the first note. The audience sang, swayed and whooped to a set filled with song we all know and love and a few new ones which were perfect for the energy levels they had induced. Ending on a bang quite literally, as hands continued to clap the fireworks began.

Booming beautifully high above the glittery crescendo held the attention of all not just at the Garden stage but across the entire festival. A moment when no matter what we were doing we would all look to the sky and marvel at the sprinkles on a very beautiful and tasty cake!

Even when the main stage is done and the fireworks sparkles have dissipated this is not yet the end of Belladrum 2015 for everyone, a pair of us made our way down to The Free Range Folk Stage once again for some highly energetic Ceilidh music from local heroes Tweed where the dance floor was packed and twirling. After a few songs and a wee jig we went to join the rest of the gang at MacFloyd. I have never been a big Pink Floyd fan but festivals to an extent are about compromise, it’s not just about what you want to see but also about who you are with, the experiences you have together and this band are special to a dear bella friend of mine as they remind him of his dad, it’s a beautiful connection music gives to people and places, many of them formed here at Belladrum.

The crowd wasn’t as big as previous years; you could still get in the tent when I rocked up around midnight and they played for at least an additional 15 minutes, even finding time to have a kick at the giant football which bounced around on top of the crowd, landing in the pit ‘just another kick in the ball’ they called as the crowd burst into laughter and clapping.

As the last people filter out still buzzing and chatting about the things they have seen and done the site it can be a strange and interesting place. Where there once was so many people and so much light and colour is now quiet, darker and a little colder. It is so quickly transformed but not for the first time, soon nature will once again rule and it will be like it never existed, a beautiful dream shared, what is more magical than that?