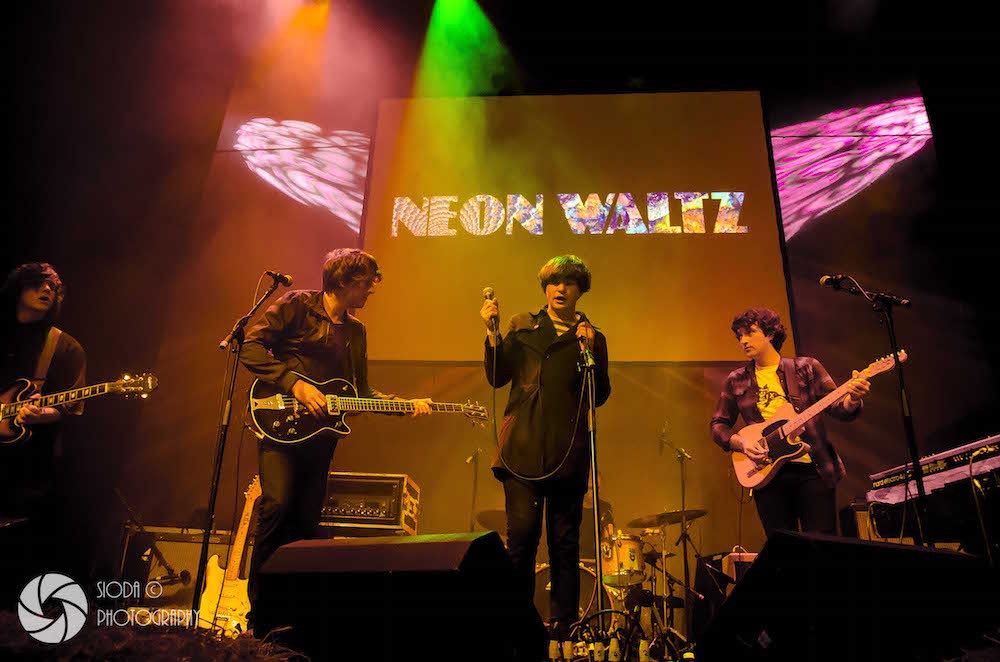 “That has been the most surreal half hour of my life”, thus spake a bemused North Hopper as she watched Spring Break close North Hop ’15.

The Highland Hip Hop act aren’t everyone’s cup of tea, although the vast majority of punters seemed to get behind the trio’s wry take on sloth, nature and agriculture. The aforementioned ‘Tractor, Tractor’ is the Number One agricultural song in Dingwall, a chart compiled by Spring Break’s DJ Butterscotch. It’s entirely a product of his own fevered imagination though and it’s best if we nod, agree and take a couple of steps back. His band-members at least tolerate his eccentricities and act as a kind of care in the community, keeping him in beer and electronic samples lest he becomes overly excitable and begins to dribble excessively.

So that was the end, what of the beginning?

The brainchild of Michelle Russell, North Hop debuted in Inverness last year with a focus on Scottish Craft beer at its core. You’d have to have been living under a rock not to notice the explosion of the craft beer phenomenon, with Scottish Gin closely following on its heels.

Brewdog is the one most likely to spring to mind having made their own irrepressible mark on the market and giving the whole industry a good shake by the scruff of the neck. A marketing style that takes no prisoners has appealed to the public and Brewdog’s size ten boot print can be found in the backsides of more than a few disgruntled brewing corporations who have found themselves having to adapt or die as a result of this craft beer explosion.

So in stepped North Hop, Michelle has cleverly tapped into beer-lover’s desire to broaden their horizons. Throw in live music, some of the best food in the country and you’ve got a winning combination. Indeed North Hop Aberdeen (hosted by the Lemon Tree) was a roaring success and this year the queue out of the door of the Eden Court on Saturday night was proof, if any were needed, that she’s hit on a winning formula.

This year’s North Hop was spread over two floors in the Eden Court. Beer and a couple of food stands downstairs, with a smaller lounge bar upstairs leading to the balcony where you found more hot food. Gin cocktails were served in the lounge bar and a few other vendors in the corridor gave it a street market feel.

Initially it’s difficult to know where to start, but heading off to grab the complimentary glass of Festival Ale by Cromarty Brewery is as good a place as any to get your bearings. Of course being a music website, my first job of the evening is to check out the music.

I arrived in time to see Aberdeen’s Blair Mcleod take to the stage. Normally focussing on instrumental music, he chose instead to regale us with a series of cover versions that I personally thought were excellent. Using a looper to beef up the choruses we were treated to covers of Abba, Free and Biffy Clyro tunes for starters.

One of our photographers is a traditionalist when it comes to rock tunes and huffed, ‘he’s just murdered the shit out of perfectly decent rock songs’ before flouncing off upstairs, cameras swinging in time with the angry stomp of his feet. There’s no pleasing everyone, but Blair did warn us that, ‘It’s going to be like a shit wedding dance’.

Upstairs the bands on the small stage struggled to get noticed by punters sampling the variety of cocktails and gins on offer, but Autumn Sun gamely gave it their best shot and I’d be keen to try and catch them again. The music here was treated more like backing music and most of the acts I caught seemed to suffer the same fate as Autumn Sun. Margaret Finlayson faded into the background on Saturday evening and it was only really the DJs that made any impact.

Back downstairs and Friday’s headline act, Neon Waltz stroll on stage and give an assured performance. The Caithness band have recently signed to Atlantic records and are generating a fair bit of buzz, none other than Noel Gallagher is a fan and you can see why.

They seem to have tapped into the same vein of sixties indie pop that did so well for the likes of Oasis and The Charlatans. Frontman Jordan Shearer seems utterly at ease with himself, leisurely patrolling the stage and sporting a mop cut that would make Bobby Gillespie weep with joy. Musically they’re not cutting a swathe of new ground, but what they are doing is impressive and the plaudits thus far are well deserved.

Saturday evening’s format is largely unchanged with electric bands downstairs in the main beer hall and the unplugged acts upstairs. James Mackenzie’s Verona are on good form, James has a bit of the Frank Turner about him and having a full band suits him and his personality. I was impressed by his raw performance at Between The Lines and his work with Verona further compliments this.

The newest recruit of Inverness’ new independent record label IMOUT, Kris Douglas aka Dr Wook was on next and he kept any chat to a minimum preferring to show why he is a worthy addition to IMOUT’s roster. I’ve seen Dr Wook (the lovechild of Kris Douglas according to Nicola McAlley, what exactly are you accusing your brother in law of Ms McAlley?) on a number of occasions now since The Whisky’s split and he’s started to really impress me with the range of songs he has and the variety he manages to get from a reasonably simple set up (acoustic guitar, kick drum and Paul Elliot on electric guitar).

Where before he may have tended to roar his way through each song (and it’s an impressive roar) this evening we had Angry Wook, Thoughtful Wook, Plaintive Wook and Impassioned Wook. Watch this one, it’ll be a bloody crime if he doesn’t sell a ton of records.

Headliners Lionel don’t really have anything to prove to local audiences at the moment (as seen at their Belladrum 2015 gig), already well known as being one of the real contenders on the music scene, packing out stages at Xpo North and Belladrum. They could have been forgiven for resting on their laurels but North Hop are treated to forty five minutes of jagged rock music, exuding a hint of menace and a fistful of catchy hooks that are difficult to shift out of your head hours later.

Frontman Josh leads the way with some subtly brilliant guitar playing, he’s no showboat, but it’s impressive that he manages to sing and play some fiddly looking riffs at the same time. This was the longest set I’ve seen them play, largely catching them at festival slots where they’ve been kept to half an hour and I did wonder whether they could sustain the momentum over a longer session. Thankfully I wasn’t left disappointed and they barely paused for breath, leaving everyone wanting more.

Of course there is more to North Hop than the music and as mentioned earlier, the array of beer, gin and food available was very impressive. Looking round the main hall there were offerings from locals such as Loch Ness Brewery and Cromarty Brewery.

The latter’s Happy Chappy is a firm favourite of mine along with the Red IPA by Loch Ness Brewery. Further afield there was representation from Loch Fyne Brewery, Brewdog and Weihenstephaner from Germany who are the world’s oldest brewery. I tried the hoppy 7% Vitus from Weihenstaphaner and it went down a treat.

In terms of food we had hot food supplied by local tapas restaurant La Tortilla Aesisina, I didn’t get a chance to try their seafood paella, there were people hungrier than me who cleared them out! Special mention should go to Aberdeen’s ‘Angus & Oink’ whose Black Mac N Cheese was just phenomenal. I take my Mac and Cheese very, very seriously and this was the best I’ve ever had. Perfect festival food and great for soaking up the beer.

Muir of Ord’s Bad Girl Bakery were also doing a roaring trade with a fine looking selection of cupcakes, Jenny and Doug who run the business said they’d ‘had a hoot’ and really enjoyed the atmosphere. Come Saturday night they’d been cleaned out, again I was just too slow!

Rebel Tattoo from Aberdeen were also in attendance having been the team who created the artwork for Cromarty Brewery’s festival ale. This was created as a one off for North Hop and the design, raspberries drawn to look like skulls, was imaginative and proved to be a talking point. A brilliant way to show how two apparently disparate companies can work together to create a great looking and tasting product! Tattoo artists Tracy and Carol were happy to answer any questions about tattooing, no matter how daft and nearly, nearly, persuaded me to get one. And if I did, I’d happily make the trip to Aberdeen to visit their studio.

All in all a successful and sold out North Hop. Here’s to the next one. 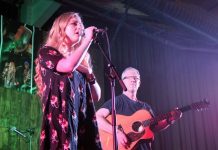 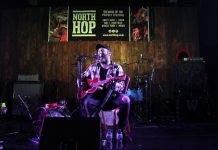